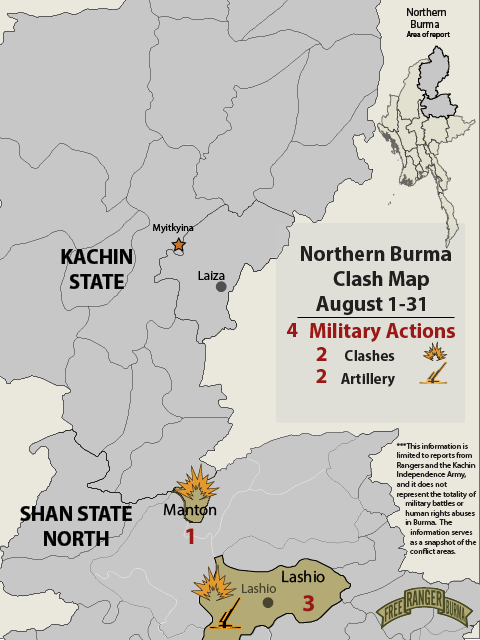 On Aug. 29 between 0730-0900, there was fighting between Burma Army soldiers of an unknown unit (estimated strength of 120) coming from Man Kang and approximately 80 MNDAA soldiers from Unit 204 in the vicinity of Bren Bum (MF 340 385), in Lashio Township. Mortars, artillery, and helicopters were used in the attack by the Burma Army.

On Aug. 24 at 1410 Lamai Bawk Htoi (male, 19), son of Mr. Lamai Brang Nu (mayor of Jahtu Zup Village), was beaten into a coma by Shanni Pyitutsit (PTTs) for passing through their Jahtu Zup Shanni checkpoint without paying the checkpoint fee. The victim was sent to Myitkyina Hospital due to the severity of the injury.

On Aug. 31, a retired Burma Army soldier, Sgt. Kyaw Kyaw (aged 52) allegedly raped an 8-year-old girl from Namhpu Yang Village. The accused was caught by the villagers and handed over to Washawng Adiministration Office, in Waingmaw Township.

On Aug. 3 at 2230 hrs, two men (Yan Naing Soe, 20, and Tum Shin Lwi, 23) fell from a height of 300 feet while scavenging for jade and died in a jade mine belonging to Myanmar Thura Company, Sabaw Maw, in Hpakant Township.

On Aug. 8 at 1320, two people were injured when a landslide hit and swept away two houses at Hkajan Block 1, Gwihka Village, in Hpakant Township. The two injured were sent to the Hpakant hospital.