“Anyone seen on the road, civilian or otherwise, would be shot immediately. Additional restrictions included a 6 p.m. curfew on the road between Kyaukkyi to Pa Kaw Hta and a shoot-on-sight command for anyone traveling from Pa Kaw Hta to Maw Law, regardless of what time they are seen.”

– Statement by Burma Army in Kyaukkyi area of Karen State, Burma, on 9 Dec. 2019

Additional restrictions included a 6 p.m. curfew on the road between Kyaukkyi to Pa Kaw Hta and a shoot-on-sight command for anyone traveling from Pa Kaw Hta to Maw Law, regardless of what time they are seen. 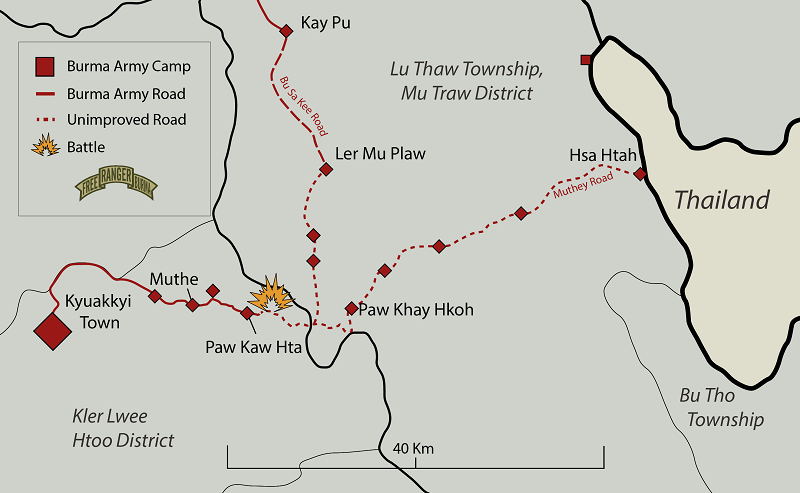 On Dec. 9, Col. Aung Soe Mein met with Muthe’s village leaders and told them that villagers were not allowed to transport rice between Muthe and Maw Law or travel along the road. Anyone seen on the road, civilian or otherwise, would be shot immediately. Additional restrictions included a 6 p.m. curfew on the road between Kyaukkyi to Pa Kaw Hta and a shoot-on-sight command for anyone traveling from Pa Kaw Hta to Maw Law, regardless of what time they are seen.

Then, on Dec. 14, the Burma Army posted a statement restricting local movement on the road from Kyaukkyi, in Bago Division, east along the road to where it meets the Karen State border. It was Infantry Battalion (IB) 39, led by Lt. Col. Htun Win Soe, that posted signs along the road. Lt. Col. Htun Win Soe had received the statement and instructions to post from Col. Aung Soe Mein, who is the operation commander in the area from Kyaukkyi to the Bago Division/Karen State border (TOC 2).

The Burma Army statement also included the following points all of which violate the ceasefire agreements :

Despite the Burma Army’s statement justifying the construction, these actions violate the NCA and villagers in the area remain on high alert. Road construction has always been one of the ways the Burma Army launches its attacks, projects its power, and tries to control an area.

Earlier this year, the Burma Army built five new camps between Muthe and Kler Soe. The new camps, along with the pre-existing Ee Tha Plaw Burma Army camp make for six Burma Army camps in a seven-kilometer stretch of the road. The building of these camps is also a direct violation of the NCA.

On Nov. 18, villagers from five village tracks posted signs at the new Burma Army camps highlighting NCA violations and protested the construction. Specifically, the signs highlighted Chapter 3, Sections 9p and 9q which state that NCA signatories are to “ensure the security and development of civilians living in ceasefire ares” and “permit civilians to move freely inside ceasefire areas.” Villagers believe the road construction and new camp construction violate these points. Additional concerns included how the villagers were no longer free to farm, hunt or fish, or practice their religious beliefs due to the proximity of Burma Army camps and soldiers.

The villagers had five goals:

Dec. 2: Light Infantry Battalion (LIB) 57 arrived at Muthe with two bulldozers and established full security coverage from Muthe to Pa Kaw Hta in order to rebuild the road from Muthe to Maw Law.

Dec. 8: KNU leaders met with Burma Army officials in Naypyidaw. During the meetings, the KNLA stopped their actions to wait for the outcome of the meetings. While the Karen soldiers waited for the results of the meeting before taking further action, the Burma Army continued road construction.

Dec. 12: LIB 590 arrived at Muthe and began providing security for the bulldozer as it made its way to Kler Soe and Maw Law.

The road in conflict is divided into sections and, since 2017, the Burma Army has been extending the road eastward from Kyaukkyi.

Between Kyaukkyi to Hsaw Mee Lu, the road is paved, allowing for two-way traffic during all seasons. Beyond Hsaw Mee Lu, the road becomes harder to travel. Between Muthe and Kler Soe, the road allows for only motorbike travel during rainy season. From January to April, the Burma Army rebuilt that section of road and a bridge but construction was slowed down because of the opposition of local villagers. Past Kler Soe, the road only fits one truck at a time.

Burma Army Units and Leaders Stationed Between Muthe and Maw Law (as of Dec. 20)

Bo Bye: Between KK and HML

Ko Thein Soe: located on a hill above the road between HML and Muthe