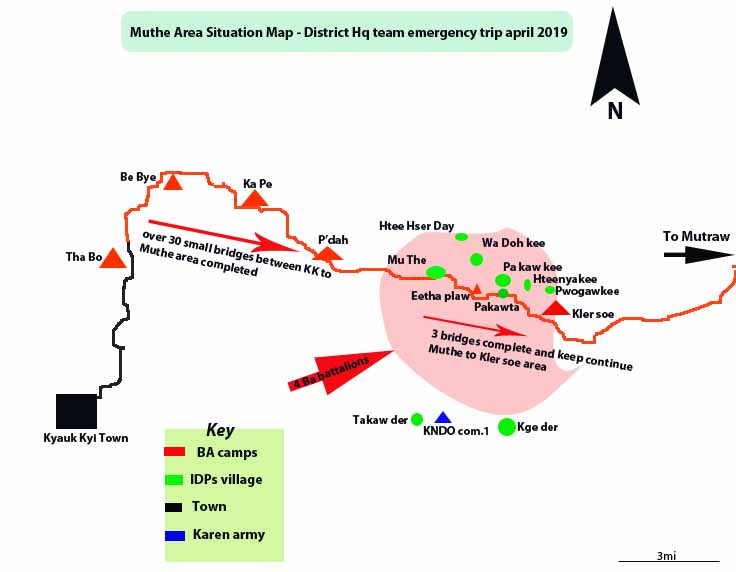 Over the past two months, an increase of Burma Army activity in Karen State has forced villagers to alter their daily lives out of fear and has forced others to flee their homes.

At 11:30 a.m. on April 30, Burma Army soldiers took a security position at Muthe, in the Pa Kaw Ta area. There, they shot Saw Ko Wah Loo, a villager from Ta Kaw Der Village who was looking for his buffalo over 200 meters beyond the car road on the Thway Boe Plaw side.

The same day, a Pa Kaw Kee villager left home to buy supplies in Kyauk Kyi for his family. On the way from his place to Muthe, Burma Army soldiers pointed a gun at him.

Burma Army soldiers finished building the bridge amidst opposition from local villagers and then sent bridge supplies to Pa Kaw Klo to build a bridge there as well. Now, villagers from Kge Der Village, Paw Kaw Kee Village, Htee Hser Day Village, and Tag Kaw Der Village are all in fear and on high-alert for more Burma Army activity. The Burma Army does not listen to their concerns and continues to do whatever they want, in direct violation of the National Ceasefire Agreement.

“We dare not work in our farms,” villagers said. “We’re worried for the next year of our food because now the time is close to prepare for our farming.”

So far, the Burma Army has finished building four bridges. There are over 15 streams in need of bridges and the Burma Army shows no signs of stopping their building projects. Troops continue to be placed as security on the sides of relevant roads, over 50 meters on either side and extremely close to local villages.

The Burma Army has also completed sections of road between Kyauk Kyi and Kler Soe. They built one part from 2017 to 2018 and another section, from Muthe to Kler Soe, this year. Burma Army IB 48 started the construction this year. On 20 April, IB 57 replaced IB 48 on the road-building project. Three other battalions, IBs 124 and 264 and LIB 598, have also been involved with construction since the beginning of the project. Then, on April 29, IB 75 replaced IB 57 who relocated to Mutraw District.

Because of the road construction, over 42 farms are facing water problems. The road and bridges destroy irrigation ditches that villagers use for watering, ploughing, and planting. Further, villagers are afraid to move around for regular activities like farming, hunting, fishing, and foraging for vegetables because of the road security.

Some of the villages affected:

There are two other small villages with about seven households and 20-30 people in each village.

This month, on May 12, IB 75 commander, Lt. Col. Aung Zaw Mone, told villagers that they were not allowed to travel or walk around the area in groups of more than three people, saying that they would be shot.

Two days later, on May 14, IB 75 fired six 60mm rounds into Thway Boe Plaw and troops fired rifles to chase away villagers, only adding to the villagers’ fears. While the Burma Army has lost soldiers during the construction, the military has stated that they will continue to build.

Villagers remain living in fear and, if the Burma Army does not stop by the end of this month, those remaining in the area will flee their homes.

On 15 April, a clash happened between Karen and Burma Army soldiers at Tata Nva Klo. The Burma Army had patrolled about 1000 yards beyond the car road which violated the agreement between the two groups. Then, on April 17, Burma Army LIB 589 threatened villagers by pointing guns at the villagers who were fishing in the Thein Nwe Klo stream. Both incidents are violations of the National Ceasefire Agreement.