The Burma Army is now sending new troops to its camps throughout northern Karen State. These units are expected to replace the existing forces that have been engaged in an offensive that has displaced more than 25,000 Karen villagers since February 2006. For the past two weeks, except for occasional mortar and machine gun attacks, there have been no major operations in the northern three districts of Karen State. Attacks are expected to continue when the troop replacement is completed.

The following is a list of units expected to be replaced and the units that are replacing them:
note: the new units have already been deployed and are co-located with the old units. It is expected that the old units will soon re-deploy back to their bases.

LID 66 troops have been stationed at this camp. LID 55 is now replacing them here and at other camps in Toungoo District, especially along the Toungoo — Busakee road.

In the meantime, some villagers from Toungoo District and Mon Township, Nyaunglebin District continue to flee to a safer area because of a shortage of food, inability to return to their villages for fear of landmines, and because the new Burma Army camps and increased presence of the Burma Army makes them more vulnerable to attack. 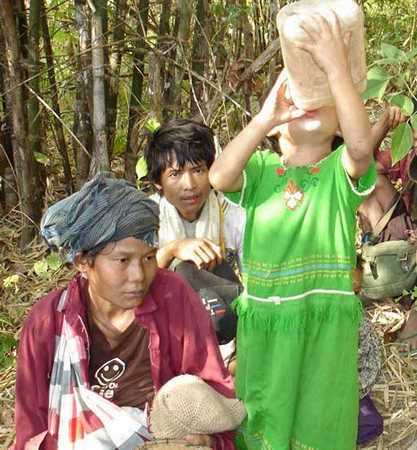 Villagers from Mon Township resting on their way to the road. 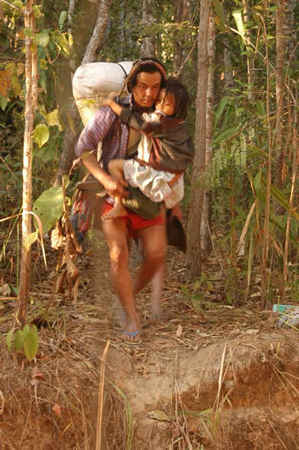 A father from Mon Township carries his daughter towards a Burma Army controlled road. 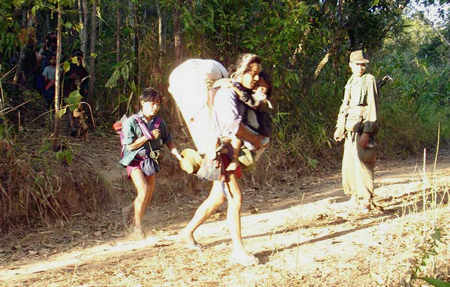 Father from Mon Township and his children cross a Burma Army controlled road.