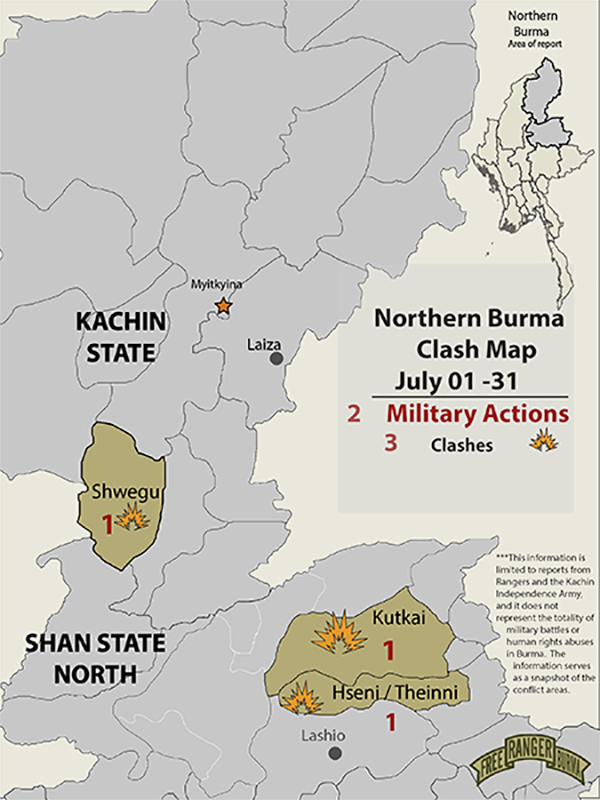 In July, a landslide caused a large number of worker deaths at a mining operation in Hpakant Township while sporadic fighting continued between the Kachin Independence Army (KIA) and the Burma Army in Shwegu, Kutkai, and Theinni townships.

On July 10 at 2100, fighting broke out between TNLA soldiers from 101st Battalion, 1st Brigade, and Burma Army soldiers from Light Infantry Division (LID) 99 at the head of Nampang Pa Village between Ngaw Nga and Mungyu, in Kutkai Township.

On July 2 between 1100-1500, Burma Army soldiers carried out extensive checks on civilians and their supplies at Nam Tin checkpoint, in Hpakant Township.

On July 30, the combined forces of Burma Army IB 238 and local Pyitutsit (PTT) confiscated mining machines and backhoes that were exploring in the vicinity of Jahtu Zup Ja Maw (Jahtu Zup mining area), in Danai Township.

On July 2 at 0800, heavy rains triggered a jade mine collapse in Gwi Hka, Lagu Jawng (controlled by the Myanmar Tagaung Company and 1.1.1 Company), Hpakant Township. The collapse killed at least 172 workers and injured 54 others, but there may be more missing that are buried under the landslide.

On July 3 several entities donated a number of funds to the families of the victims. These included:

On July 17 at 1030, a mixed group of jade entrepreneurs from Mandalay donated 100,000 kyats to each family of the miners killed in the July 2nd landslide in Gwi Hka, Lagu Jawng (Hpakant Township).

On July 20 at 1500, a landslide at an old jade mine above Met Lin Jawng in Hpakant Township killed a miner, Maung Man Shwe (age 25). His body has not been recovered yet. The mine belonged to the Yadana Tawngdan Company.

On July 21, 16 armed police led by a deputy police officer from No. 30 Special Police Station reinforced Gwihka Base (Hpakant Township) where Burma Army soldiers from LIB 11 are positioned. This was done in order to strengthen security for a mining company.

On July 28 at 1430, two houses in Dumbung Village (Mogoung Township) caught fire while the families were away. The fire was caused by a faulty wire circuit which was attached to a solar panel in a property belonging to Mr. Kareng Nai Shawng.

On July 2 at 1111, the commander of Northern Command, Major General Tay Za Kyaw, took a contingent of soldiers on a transport helicopter and landed at Hpakant Division Base. Accompanied by departmental staff, Commander Maj. Gen. Tay Zar Kyaw along with 15 cars (including three of the 4WD variety) escorted 25 armed police forces to inspect the site and went back at 1430. At 1530, they returned to Myitkyina.

On July 22 between 1010-1045, a helicopter and a jet flew over Myitkyina, Nhkai Bum and Mali Hka, in Myitkyina Township.