The following is a partial list of civilians murdered in 2006 by the Burma Army with known Burma Army (BA) units:

On July 26th, 2006, Burma Army troops from LIB 542 killed one porter at Wah Kee Village. The name of the porter was **** *****, from Mandalay. This porter was forced to carry loads for the Burma Army to support the ongoing offensive occurring against villagers in Mon Township.

These patrols are a continuation of attacks and patrols which began in March and displaced over 18,000 people, 5,000 in this township alone. The current activities are part of ongoing Burma Army effort to gain total control of the Karen population in this part of Nyaunglebin District. Many of the villagers from Mon Township are still in hiding since having fled Burma Army attacks in March, May and June. These villagers have been unable to return to their homes and fields, and are facing an immediate and long-term shortage of food. Villagers not in hiding are subject to forced portering and must provide food and building materials for Burma Army camps.

On Aug. 9th, 2006, Burma Army IB 60, under DIV. 23 arrived in Mon Township to increase patrols in the area. They arrived with 19 vehicles (cars and trucks), then divided into two groups: one group went to Muthey camp and one group went to Kyauk Pya and Maw Leh.

Burma Army LIB 351 and IB 60 are now camped at Muthey. The Burma Army is building a new camp in the Muthey area they call Kya Kong as part of plans to control the local population in order to develop this area for mining and logging. The construction of the new camp began on July 13th, 2006. They have a generator at the new camp and will soon begin mining for minerals. Burma Army has also forced villagers to relocate from Pa Ko town to Muthey. The Burma Army has been concentrating their operations on the villages close to Muthey, along the Kyauk Kyi (Ler Doh) to Paw Gwaw car road. The Burma Army has built a fence near Muthey which has restricted villagers’ travel to and from their fields. If villagers run out of food, they must inform the Muthey camp officers. 20 police officers were sent to Muthey on July 10th, because they are going to open a new police station there.

The Burma Army also continues to re-supply their camps. As recently as Aug. 14th, 2006, a Burma Army Unit under MOC 21 sent food from Shweygyn Town to Saw Bey Der camp, located between Kyauk Kyi (Ler Doh) and Hsaw Hti. Despite heavy rains and difficulty of travel, the Burma Army has not showed signs of ceasing operations in the area.

Earlier in July, an FBR relief team leader met with villagers from Shweygyn Town, who said that on July 28th, Burma Army IB 28 left Shweygyn to go to Mey Wey in Papun Dstrict, via Kushaw. They tried to round up 80 porters to go with them but could not get that many. This unit is originally from Shan State.

It was also reported that IB 57 and LIB 350 are supposed to return to Shan State, but this has not yet happened.

Villagers who have been farming near Shweygyn have to pay 1,500 Kyat monthly tax to the SPDC. They have one tax collector named Soe Maung, a soldier retired from BA IB 57.

The relief team leader also interviewed three porters who escaped from LIB 276 and IB 56, under MOC 21, TOC 2. The porters escaped at Kushaw on July 30th, 2006. One porter had been wounded by a land mine. Two of them carried the wounded one and they all eventually arrived at a Karen National Liberation Army (KNLA) location on August 2nd, 2006.

They said they were able to escape because TOC 1 was being replaced by TOC 3 at Kushaw. During this troop rotation, soldiers were replaced, not porters, all of whom had to stay for the new troops.

KNLA medics performed surgery and gave medicine to the wounded man who suffered a broken leg. He was able to keep his leg.

This area, in northern Papun (Muthraw) District, is a junction of tactical and strategic importance. It is the junction of the three northern Karen Districts: Toungoo, Nyaunglebin, and Papun as well as the Southern Karenni State.
One of the objectives of the Burma Army here is to establish a secure line between the new camps and the old ones that anchor from the south to the north. This secure line of bases then enables the Burma Army to launch operations against IDPs hiding deeper in the Karen State. The Burma Army at the new camp at Baw Kaw Plaw and their old camp to the north at Busakee, are trying to clear and dominate the Lay Kee/Kay Pu area of the Papun and Toungoo Districts and the Karenni State border.

Note: In the Busakee area at the end of the Tongoo-Kler La- Busakee Road, the Burma Army has given a new mining concession
(We do not yet know the name of the company it was given to). 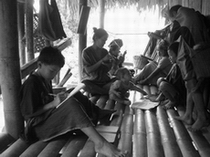 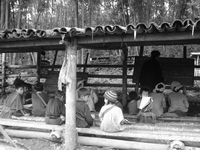 Reported: August 5th, 2006.
Teachers have set up a new school in ** ** ** Village for students displaced from other villages in the area and are in need of materials like notebooks, pens and pencils. Currently, the students do not have textbooks. The teacher reported this need to the FBR relief team in their area and also requested that the team see patients needing medical treatment in the area.

Two students are highlighted below:

Naw ** *** ***, 14 years old, from Dee Thu Der Village
She was a student in Dee Thu Der Village school until the Burma Army entered the village on July 17th, 2006. She and her family moved to ** ** ** Village in Yeh Mu Plaw Village Tract and she started school there. She studies in the fourth standard and she does not have enough notebooks, pens, pencils or chalk. She and the other students are studying in a buffalo field. 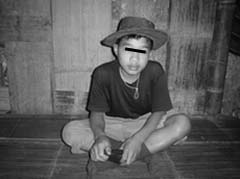 He went to ** ** ** Village and continued his schooling there, starting July 24th, 2006. He said that he did not have enough notebooks, pens, pencils or textbooks. He said some of the students from his old village are going to school with him and others have gone to a different village.

Summary of FBR relief team mission to Papun (Muthraw) District in early August, 2006.
By a Karen FBR team in the field now.

On June 26th, 2006 Burma Army LIB 368, 369, and 370 launched their attack from Paw Gwaw, arriving on June 28th at Dee Htu Der Village. All villagers fled prior to this attack, so when the soldiers entered the empty village they ate many animals, stole what they wanted from the villagers, and destroyed the villagers’ crops and farm huts.

During our mission we saw many villagers in hiding and we tried to help them. We cooperated with village leaders in order to help the villagers as much as possible. We were able to treat sick people, interview people, and encourage the people to have peace, love, and hope. We thank our leaders for helping us and it is our hope that we can be part of bringing freedom for every nationality in Burma.

When we interviewed the villagers they told us about why they had to flee their homes.

“When the SPDC entered our village we had to run away. We cannot go to our farms. The SPDC ate our animals, like chickens, pigs, goats and also destroyed our plants. We had to move to another place and another village. We want to go back and to stay in our village, but we cannot go back because the SPDC stays too close to the village”.

***Note: In this report, names of villagers and, in some cases, villages, have been obscured with asterix to protect the privacy and safety of individuals and communities.