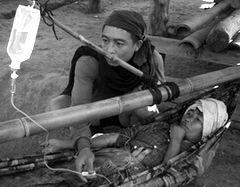 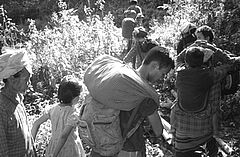 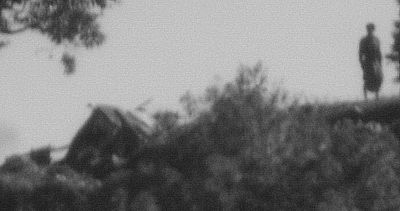 These photos are of a Burma Army soldier and one of the Burma Army positions above Mawchi, Karenni State. Mawchi was one of the bases that the Burma Army deployed from during their recent attacks against civilians in Southern Karenni State. These same units burned the village of Gwe Ga Per, captured, tortured and killed villagers, placed land mines and attempted to kill the family members of the two Karenni families now on the run; described in the story below and in a previous report.

While we were moving out with the family of Sa Nu Nu who were fleeing the Burma Army (see previous report), two more Karenni families from the same village joined us as they also faced death from the Burma Army. The son of one of the families, Saw Naw Ku, had been captured at the same time of Saw Nu Nu and six others. All were tortured and one man killed and decapitated, but Saw Naw Ku managed to escape after Saw Nu Nu escaped. This family of five; Saw Naw Ku, his two young sisters and mother and father were very weak and sick. The mother was vomiting and collapsed as we walked with her. She cried and we could see she was not just physically sick but also very distraught to be leaving her home, farm and homeland. We gave her an IV, prayed with her and rigged a hammock stretcher and carried her on to a safer area. She is now resting at a mobile clinic at which we arrived yesterday and is improving. The three families will be moved as soon as possible to a refugee camp. (Name,ages, occupation and religion of each of these Karenni families fleeing from Pa Haw Ko village.

We thank you all for your care for these people and your prayers.