Videos of Survivors and Destruction by Burma Army Airstrikes

Videos of Survivors and Destruction by Burma Army Airstrikes

Day Pu No Village is a small Karen village located about seven miles from the Thailand border, surrounded by jungle and rice fields and situated on the banks of the Yunzalin River, right where it starts to transition from a fast-flowing mountain torrent to a wider, more pastoral watercourse. The village is accessible by foot and a new seasonal dirt road. On the afternoon of 27 March, villagers in Day Pu No noticed the sound of aircraft, not normal for this remote area. They knew it could only be Burma Army aircraft – no one else would be flying there, but the Burma Army hadn’t attacked by air here in over 20 years.

The planes circled and left. Then, around 7:00pm, about an hour after sunset, the planes returned. This time they didn’t just leave, and the quiet of the evening was torn apart by exploding bombs. The planes dropped four bombs in the area, killing three people immediately, fragments tearing into the open bamboo-and-wood houses the people live in and leaving deep craters.

And they still weren’t done. Several hours later, from 1:00am-2:00am, Burma military air force planes returned, dropping more bombs. Three people were killed and eight were wounded in this series of attacks. The local high school was destroyed, in addition to several homes. More than 5,000 people in the Day Pu No valley fled into the jungle to hide from the bombs. The following day more airstrikes came and continued on 28, 29, and 30 March and 1 April. A total of 20 people were killed and 40 wounded in the strikes. The Burma Army ground attacks continued and then on April 27th the airstrikes commenced again but this time, the people were in hiding and no one was killed. Due to the ongoing ground attacks and airstrikes

there are now over 30,000 displaced people in Northern Karen state.

FBR teams have been providing relief as the number of people hiding in this area has increased over the last month with the Burma Army continuing its attacks. Recently, we were able to film some of the destruction and interview survivors. These videos are below.

Thank you for being in this with us, May God bless you,

Video of destruction and site of villager’s death 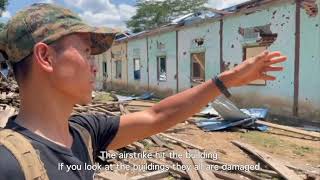 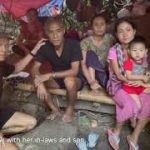