On 2 April 2021 in the early morning, a deadly fire broke out in Balukhali Camp 10, one of the many sections of the sprawling refugee camps located near Cox’s Bazar. Our FBR Rohingya team reached the incident at 9am on 3 April 2021 and began to help the people. The fire started in a Rohingya shop and quickly spread to the other 15 closely packed stores. All the stores including the merchandise inside were burned completely to ash. There were five Rohingya people inside when the stores caught fire; three of them died and two were seriously injured.

The dead have been identified as Foyazul Islam (22 years old), Md Ayes (18 years old), and Anser Ullah (15 years old), all from Camp 10, Balukhali. The cause of the fire has yet to be determined but the police department is conducting an investigation.

On 19 March 2021 news of small fires were being reported but these would soon prove to be precursors to a large fire that occurred on 22 March 2021. This large fire devastated camp Balukhali, Camp 8w, part of the sprawling complex of camps in Cox’s Bazar, Bangladesh. The fire started at 3pm and was completely out of control until 8pm that night. Approximately 10,000 shelters were completely destroyed leaving 85,000 thousand people homeless. There were a large number of children reported missing and the total number of lives lost in the fire has yet to be determined. In addition to the lives lost, market shops, schools, mosque, hospital, and food centers were all destroyed.

The FBR Rohingya team quickly arrived to help by evacuating people, helping carry their belongings, and partnering with the local fire department to fight the fire. The team returned to the camp on 24 March 2021 and reported that the fire left five people dead and 570 people injured, with 440 people missing. The total number of displaced individuals is 75,000 people, about 10,000 families. Many children have been reported missing and the village leader reported that the barbed wire fences surrounding the camp prevented people from fleeing. On the 31 March 2021, the FBR Rohingya team distributed mosquito nets and helped a total of 400 families in Camp 8.

Additional fires have taken place earlier in the year as well. Our Rohingya Ranger team in the Nayapara Refugee Camp in Bangladesh reported on 14 January 2021 of hundreds of Rohingya homes destroyed. A large fire raged for hours until emergency response was able to put it out. Our Rangers immediately responded by helping families move to a safe place and assisting the fire service by providing them with water from the water well pumps. Two members of our team also lost their homes and all of their possessions.  Several people were injured, hundreds of homes destroyed, children were missing, several water well pumps were damaged, and hundreds were left with only the clothes on their backs. Our Rohingya Rangers were able to distribute a blanket and mat to each of the more than 500 families who lost everything.

The FBR Rohingya team have met with the several of the victim’s families. There is a feeling that the fires may have been started intentionally but this claim has not been substantiated. Those interviewed could not determine the exact cause of the fire. One woman reported smelling gas before she was forced to flee her shelter. The fire moved so quickly that she only had time to grab her children and was forced to leave her sick husband behind. He was unable to move due to an illness. She stated, “I had to leave the place crying to look at my husband who was burning on the fire in front of me and I was out of my sense hearing the holler and cry of my husband.”

The police have arrested and charged several Bangladeshi youth for starting the fire. There is a feeling among the local community that the fires are being started with the intention of driving out the Rohingya. The FBR Rohingya team have been interviewing more individuals in an attempt to substantiate these claims.

The FBR Rohingya Team is currently going door to door and distributing goods in an effort to help those who have been affected by the fire. FBR is not the only NGO working to help those devastated and displaced by the fire: BD Red Crescent Society, IOM, World Vision, Plan International, MSF, Turkish Aid and BRAC are providing food aid and tents. 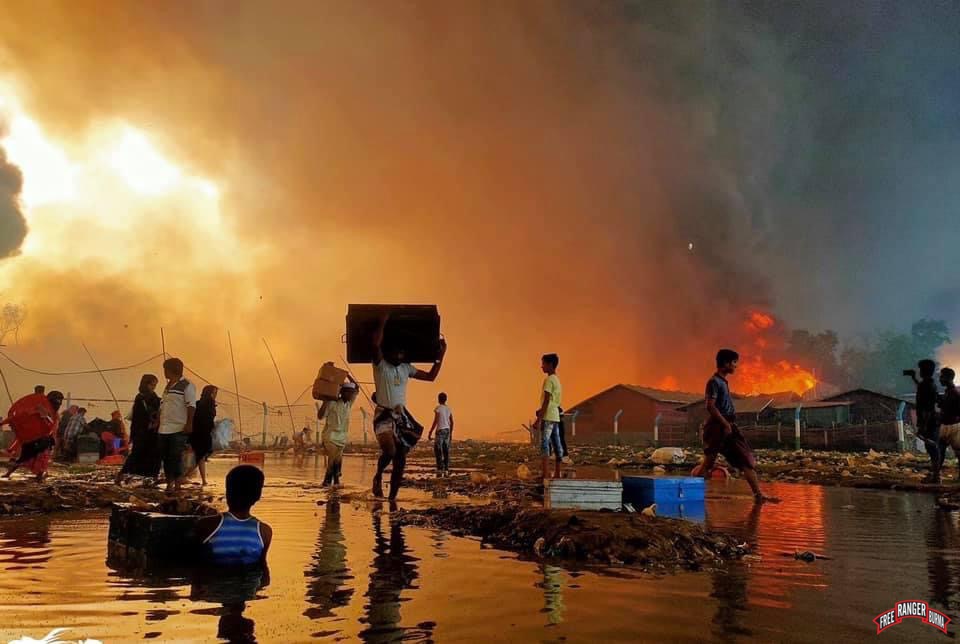 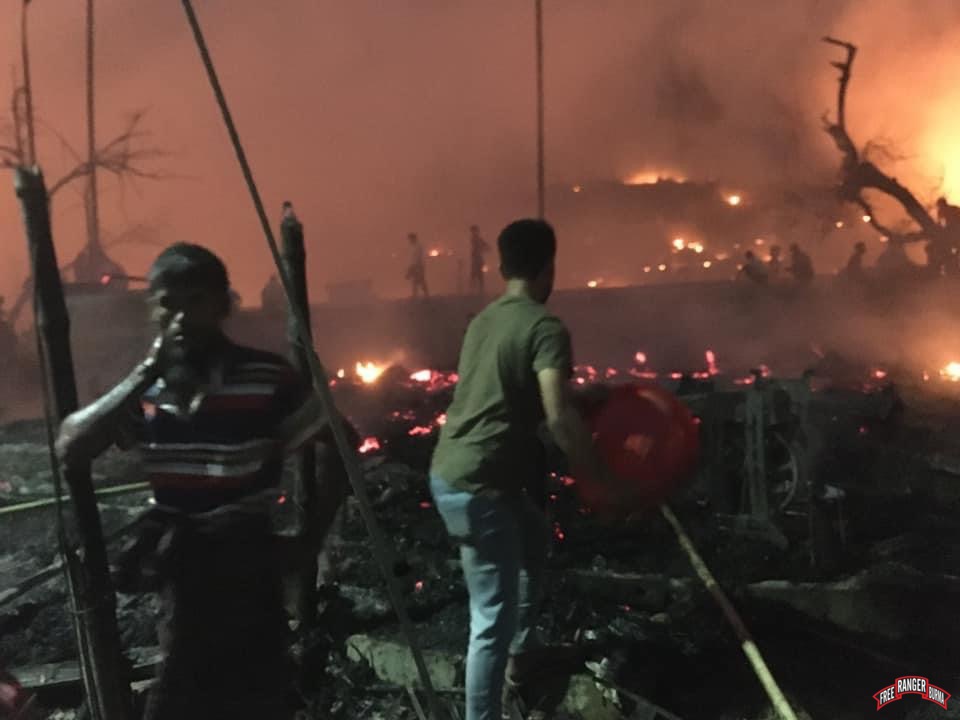 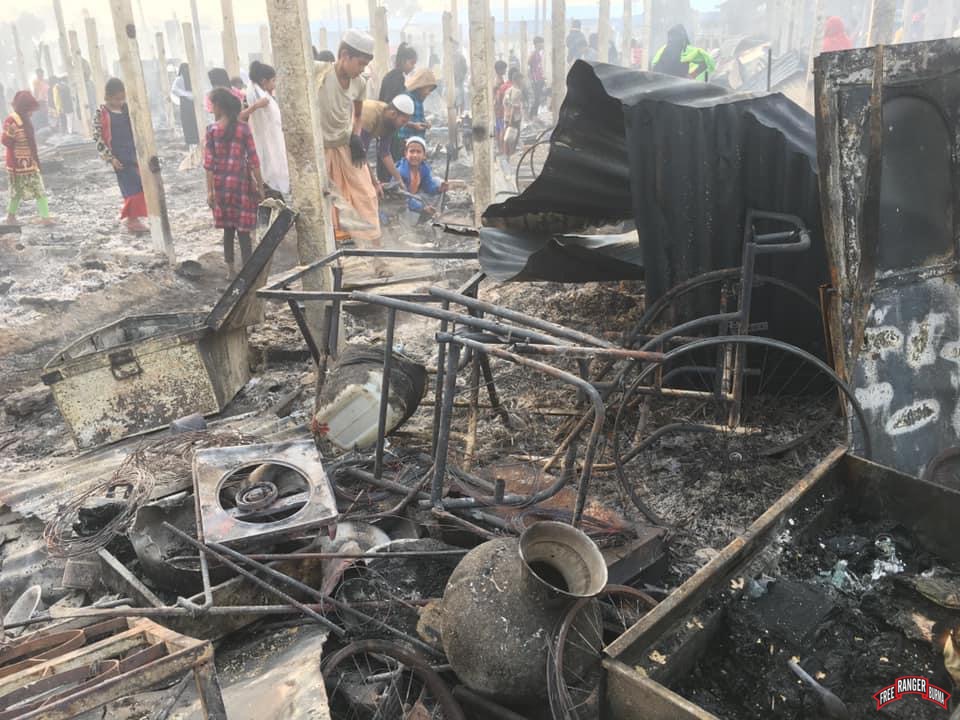 Refugees in the aftermath of the fires. 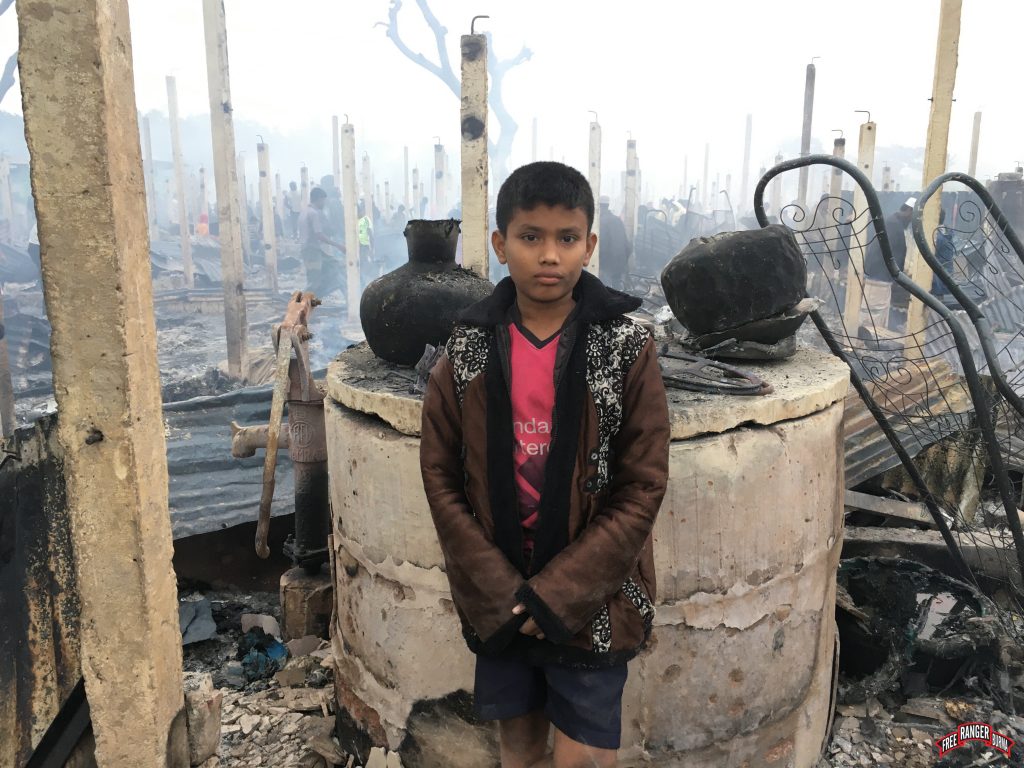 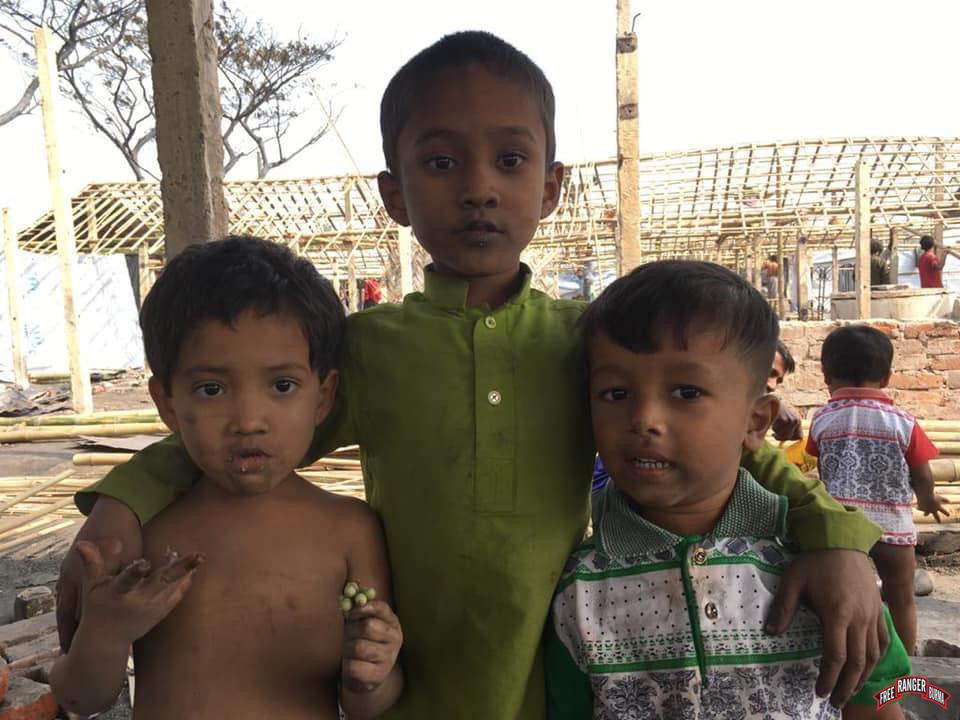 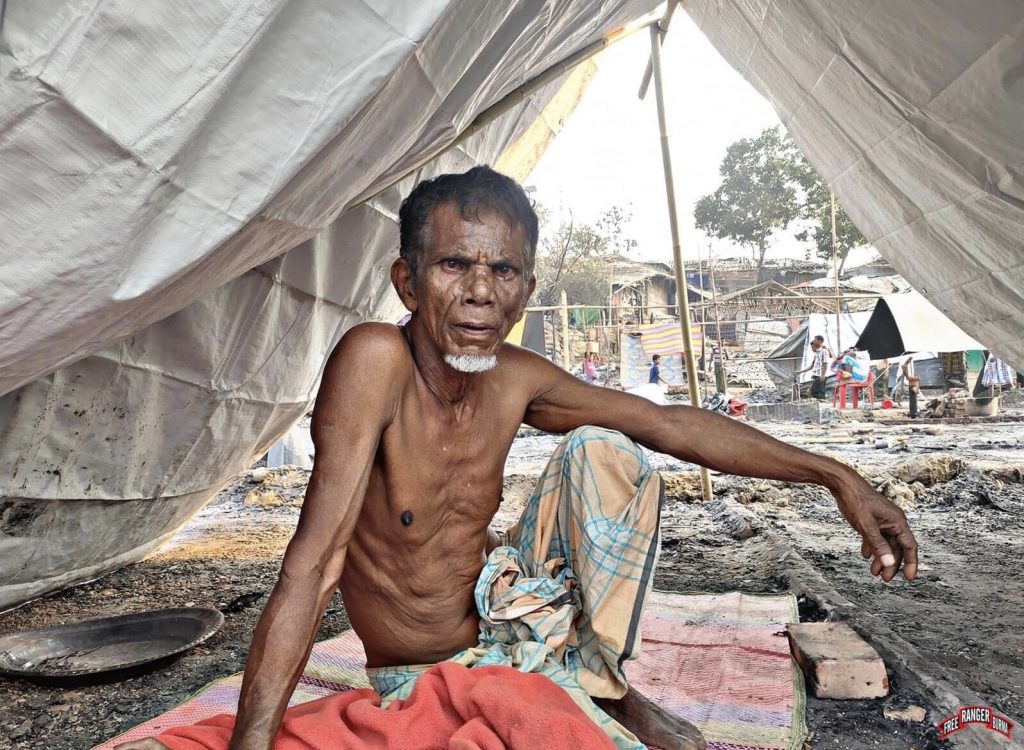 Giving relief supplies to people who lost everything. 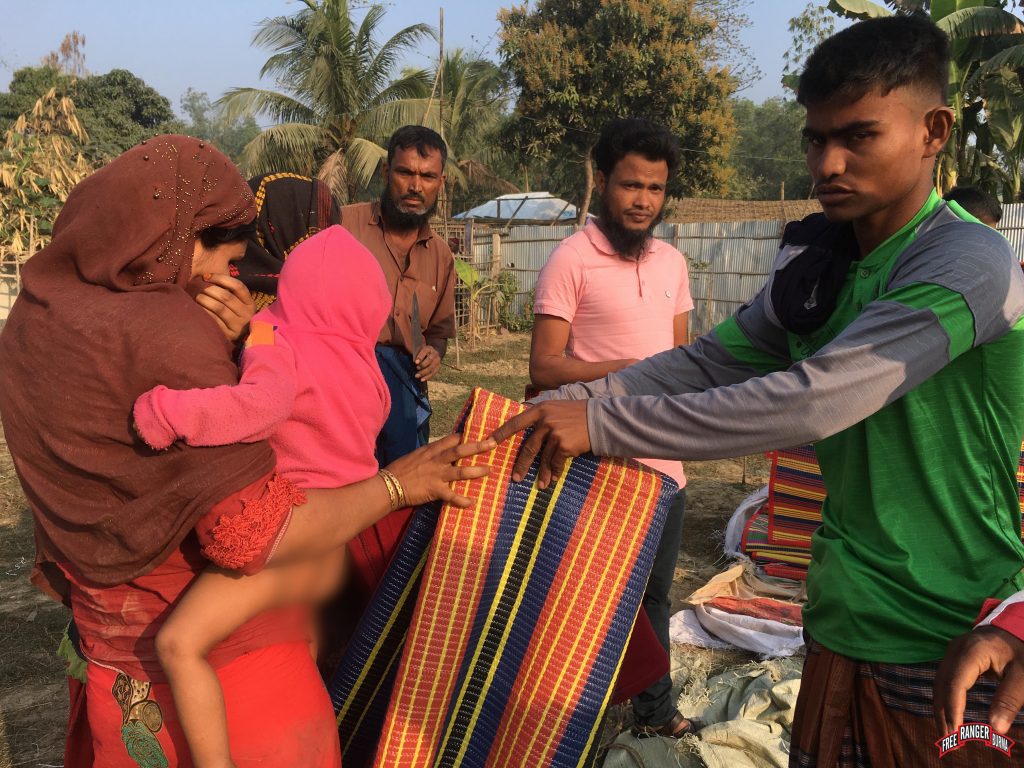 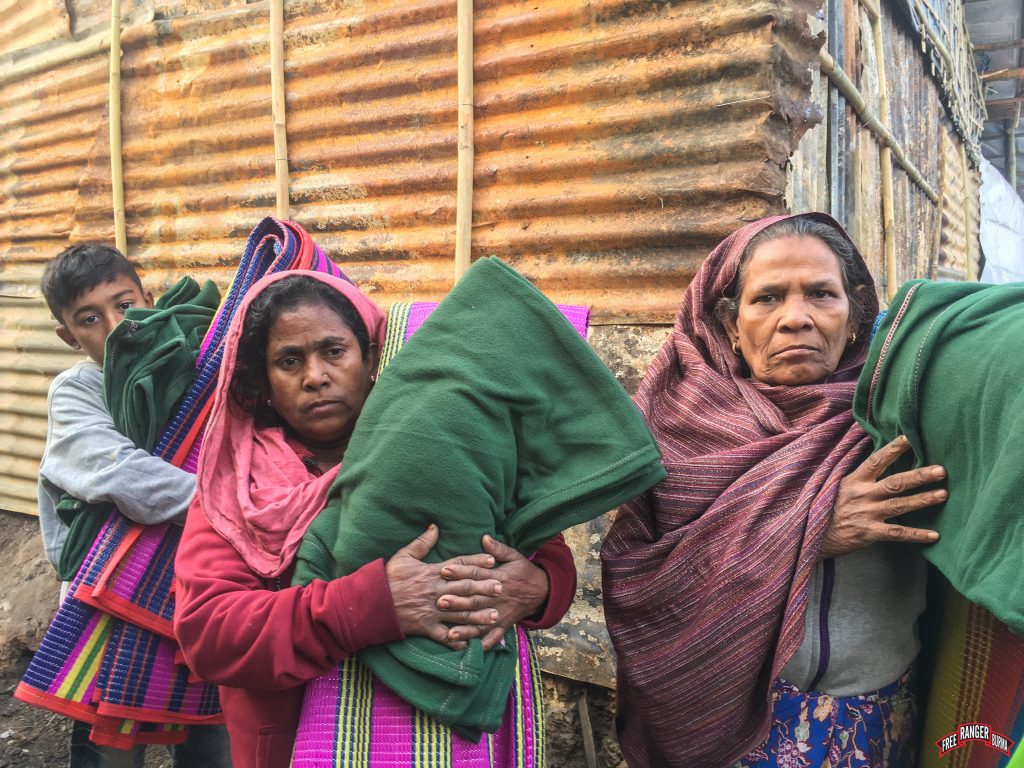 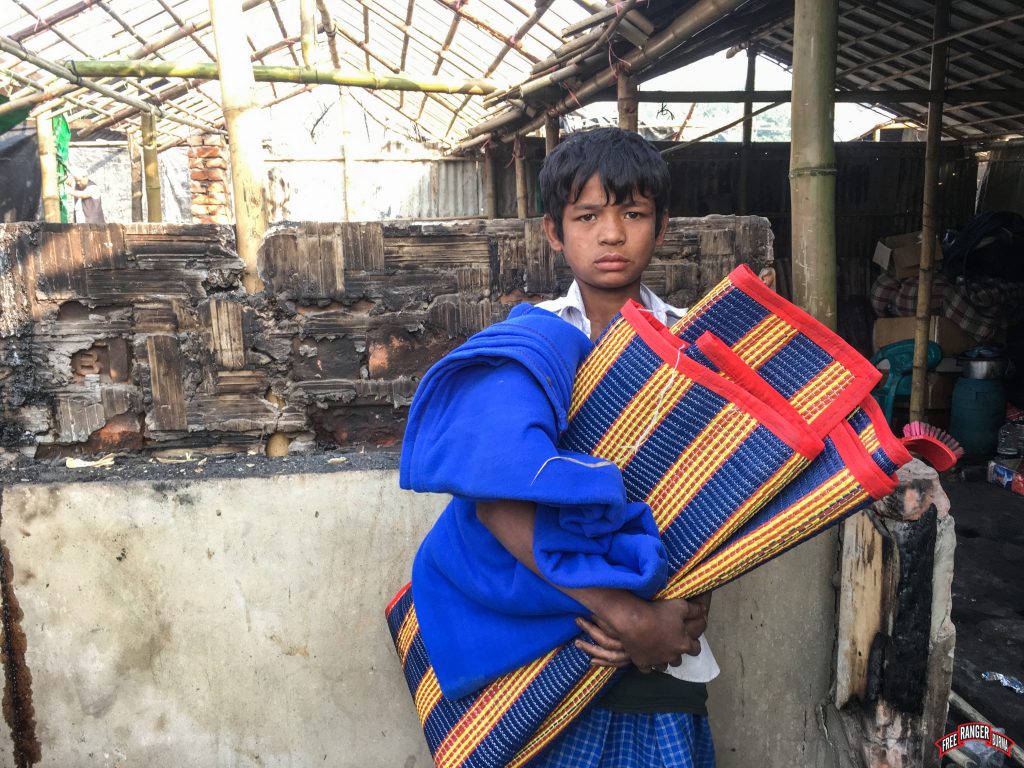 Bodies of some of those who lost their lives in the fire.