One Day Until the Free Burma Rangers' Film Showings

One Day Until the Free Burma Rangers’ Film Showings 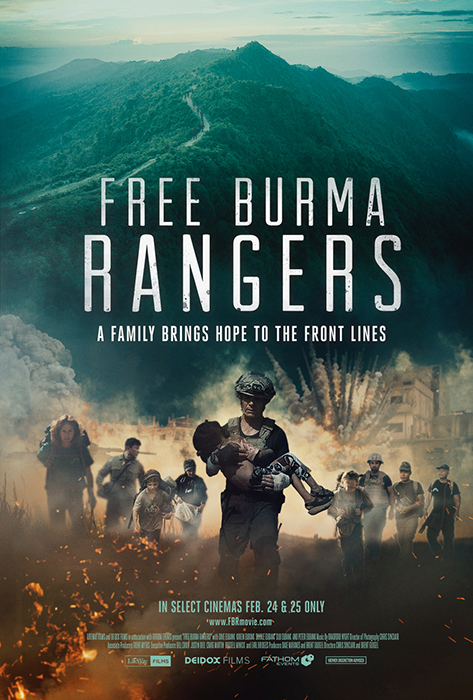 We are just one day away from the Free Burma Rangers film coming to theaters across the US. It will show for just two nights, Feb. 24 and 25, and some theaters have already begun to sell out! We hope you will be able to see the film about the heart and mission of our work and that you will buy your tickets online ahead of time. We’ve been so amazed and encouraged by the responses so far! Here are just a few articles that share more about the film:

When he sent an email to the Free Burma Rangers in early 2004, filmmaker Chris Sinclair didn’t expect that in a few short months he’d be hiking across Thailand taking photos of displaced individuals. And he certainly didn’t expect that years later, he’d create a documentary telling the story of the FBR and their founder, David Eubank.

“I think what it does is, it lifts the veil of the headlines of what we’re familiar with,” Sinclair says of his film, Free Burma Rangers. “Whatever little or distorted view of Iraq or Burma we have, I think those places become real and human, and I think we can be a lot more nuanced in our conversations about the topics of war and displacement and migrants when you see and understand their stories.” Dallas Observer

Free Burma Rangers is one part war documentary, one part missionary profile. Produced in partnership with LifeWay Films, it follows the globe-trotting missionary efforts, over two decades, of Dave and Karen Eubank. Worldly wisdom would call the couple crazy for bringing their three young children to live and serve in violent war zones like Burma and Syria. Indeed, the film raises great questions for discussion along these lines. Is there a point where laudable gospel ambition becomes reckless and dangerous? Should a missionary of Jesus ever wield a machine gun and partner with combat forces? For students of missiology, active or aspiring missionaries, or really any Christian, Free Burma Rangers is worth your time. The Gospel Coalition

More recently, when ISIS spread terror through Iraq, he and other volunteers — including his wife, Karen, and their three young children — decided to help there.

What they encountered surpassed in evil and horror their experiences in Burma. It tested their faith, but they prayed for strength. Whatever your religious beliefs, you will find their courage and idealism inspiring. Boston Globe

Below are links that show the heart of the film and the trailer. Thank you again for your prayers and support. We hope you enjoy the film!