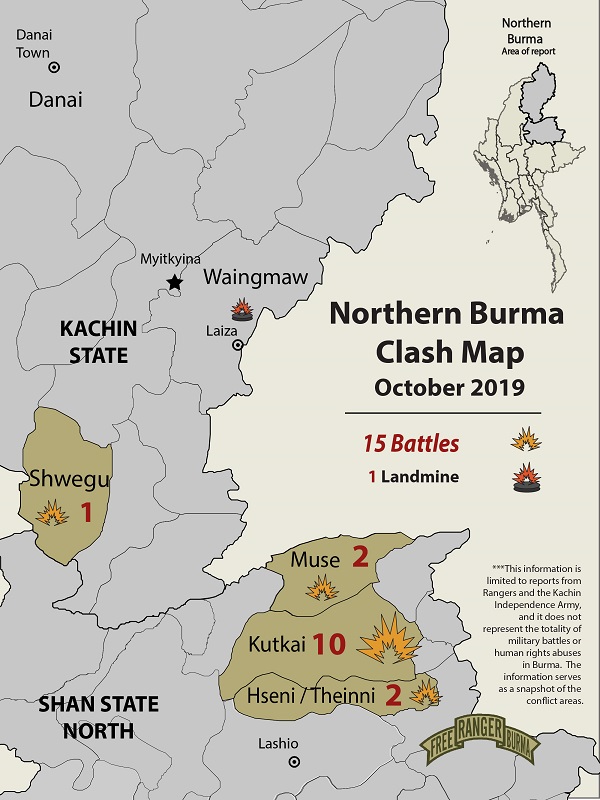 October has seen a continuation of conflict within and around Kutkai Township, with Burma Army units being supported by air. Conflict in Northern Burma has reduced in Kachin State over the last year and increased in northern Shan State, where trade routes and ethnic enclaves reside in contested territory.

On Oct. 26, 231 villagers fled from Nam Hwi Village, Nawng San Village, and Maru Hpakga Village due to nearby battles between the Burma Army and the Ta’ang National Liberation Army (TNLA). The villagers, 112 males and 119 females from 68 families, fled to Kachin Baptist Church compounds at Maw Han Village.

On Oct. 25 at 0930, Burma Army and TNLA soldiers battled at Mungmyit Sinli, Kuthkai and Nam Pa Chi. The Burma Army banned traveling in vehicles at Bum Sum Shi near Kutkai and the Lashio-Muse road.

On Oct. 12 at 1600, three civilians were wounded by Burma Army mortar rounds. Burma Army soldiers fired the mortars from Kutkai into Manbang, Man Awng Village. One adult female, one adult male, and a two-year-old infant were injured.

On Oct. 2, Burma Army soldiers at Seng Tawng Post near the Danai River erected a checkpoint and extorted civilians. Supply boats were forced to pay 100,000 kyats and passenger boats 50,000 kyats. People unable to pay were prohibited from operating their boats.

On Oct. 14, approximately 50 Burma Army soldiers from IB 141 attacked the KIA Awng Jat Post in Shwegu Township. The attack was launched while most of the KIA soldiers were being relieved offsite.

On Oct. 26 at 1330 a man from Namsan Yang stepped on a landmine near Lazing Kawng while fishing, and was seriously wounded.