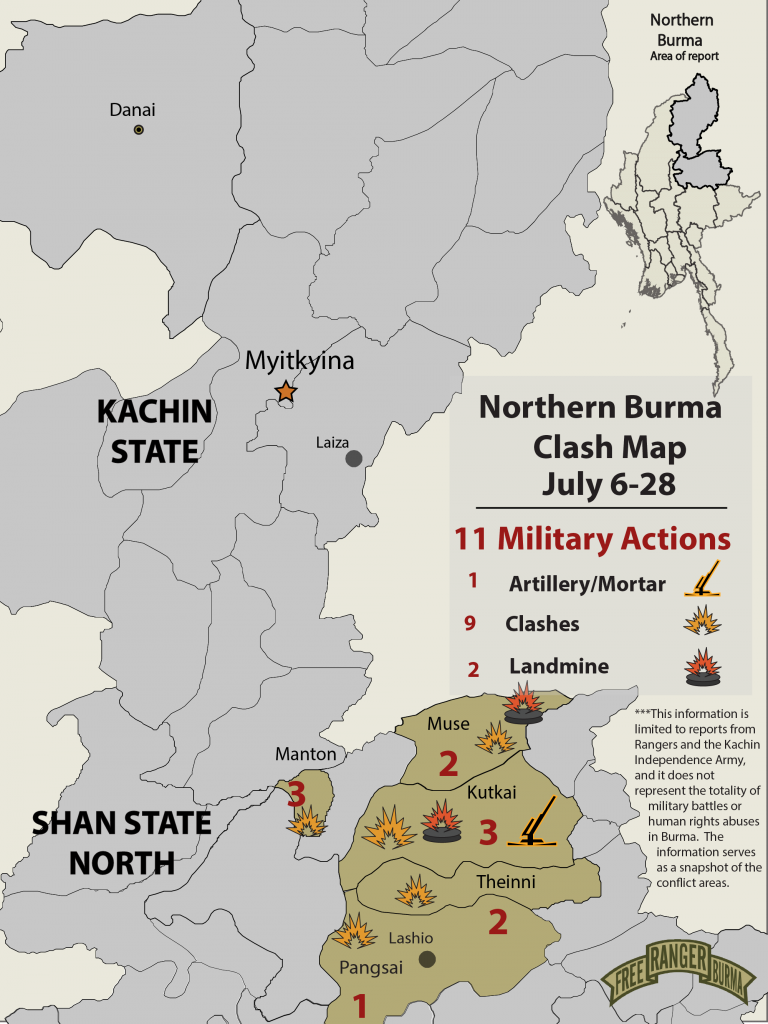 Much of the reported military action during July took place in north-central Shan State. Civilians suffered from landslides in Hpakant Township while the Metta Organization was able to provide financial aid to families in Mansi Township.

On July 23 at 2100 hrs, Kyaw La (male, 43) was buried in a landslide while mining jade at Gwihka Maw in Hpakant Township. He was from Gwihka Maw Tawng.

On July 28 at 0245 hrs, 15 workers from the Yaze Hta Ne Company and five policemen along with their weapons were buried in a landslide in an area operated by Tsinglung Company, Kawng San Village, Hpakant Township.

On July 9 at 0930 hrs, fighting broke out between elements of the Ta’ang National Libration Army (TNLA) and the Restoration Council of Shan State/Shan State Army-South (RCSS/SSA-S) in the area between Na Sai and Pangsai.

On July 24, a truck transporting a platoon from Burma Army LID 99 struck two KIA 36th Battalion militia-planted mines in the vicinity of Mahkaw Hkyet. Reported casualties included two killed and six wounded, the wounded being admitted to Muse Hospital. The truck was reportedly heading to Namtau from Mungbaw Maihpang.

On July 6, a platoon-sized element from Infantry Battalion (IB) 102 exchanged fire with TNLA 1st Brigade soldiers (based at Makman) in the vicinity between Mungyu Village and Namsung Village.

On July 12 at 0600 hrs, soldiers from Burma Army IB 130 exchanged small arms fire with elements of the TNLA in the vicinity of Saihkau Village.

On July 12 at 0700 hrs, TNLA soldiers exchanged small arms fire with RCSS/SSA-S soldiers in the vicinity of Manchyam, Kawng Hung.

On July 12 at 1400 hrs, a company-sized element of Burma Army Light Infantry Battalion (LIB) 367 coming from Banghak exchanged small arms fire with an MNDAA platoon-sized element from Unit No.201 in the vicinity of Bangbu.

On July 20 at 0800 hrs, a company-sized element of Burma Army soldiers from an unidentified unit exchanged fire with an MNDAA platoon from Unit No.205 at Nawng Kyawng Bum. The Burma Army unit was approaching from Nawng Kyawng Hpraw when the fighting began.

On July 14 at 1330 hrs, a company-sized element from Burma Army LID 99 exchanged fire with a platoon-sized element of TNLA soldiers from Unit No.335 in the area between Pyinglung and Namsa.

On July 11 at 2220 hrs, a company-sized element from TNLA No.233 Unit fired mortars and small arms at a position occupied by Burma Army IB 241 stationed at Kutkai Village.

On July 28, three Burma Army trucks coming from Dima Village struck two mines that were command-detonated by elements of the KIA 9th Battalion.