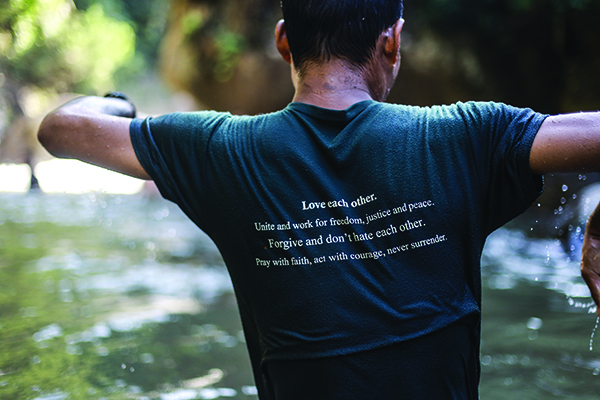 Thank you for praying for us and helping us help others, from Burma to Kurdistan and Iraq to Syria.

In Kurdistan and Iraq we continue to bring teams from Burma to support our Kurdish and Iraqi team there. We work with our Iraq and Kurdish friends to help people under attack by the remnants of ISIS, to provide relief, follow up on medical assistance to those who were wounded in the battles against ISIS and to build playgrounds in the former battle grounds with the help of organizations like Reload Love. We miss our many friends who died, like Shaheen, our Yezidi team member who was killed by ISIS in the battle of Mosul saving an Iraqi family. Before he died he told me, “I used to hate Iraqis because of what they did to my people. But now I love them, God has changed my heart. That is why I am here.”

Syria is in turmoil with over 500,000 killed and 11 million displaced. Assad’s forces, backed by Iranian troops, as well as Russian troops and air power, advance steadily and brutally across more and more of Syria.  ISIS has lost control over all its territory but continues hit-and-run attacks, one of them recently killing American friends we had met in Membij. Turkish military forces along with their proxies, the Free Syrian Army, which is made of Muslim extremists including ISIS members, have invaded parts of northern Syria. They attack America’s allies, the Kurdish, Syrian, Yezidi and Syriac Christian-led Syrian Democratic Council and Force (SDC/SDF). In the midst of this onslaught of death, hate and fear, we go in Jesus’ name, joining others there to do all we can to help those in need.

We have been working in Burma for over 25 years and still we see the Burma Army murder, rape and displace its own people. We first met Naw Moo Day Wah (pictured on the next page) in 2001, after she was shot by the Burma Army in Karen State, eastern Burma. She was eight years old then and we met her again in January 2018; she was married and had a new baby. “Will the Burma Army attack again, will I have to run again?” she asked. Now, in 2019, in spite of a declared ceasefire, the Burma Army attacks again and again. Naw Moo Day Wah, and her baby and husband, run again and again. In Kachin and Shan states in the north, over 100,000 are in hiding, in western Burma over 6,000 Arakan have been displaced at the end of 2018 alone and also in western Burma over one million Rohingya have been run out of the country. This would seem hopeless except we know God cares and changes hearts. FBR relief teams are made up of people with changed hearts who live with the oppressed to give help, hope and love, put a light on the situation and pray for our enemies. These men and women of different ethnicities and religions join together for love, freedom and reconciliation.

We have over 90 multi-ethnic relief teams in the field, yet in every area we serve, we are small. Still, as long as God sends us and people are in need, we go. And, in spite of the power of evil, we see the good God brings: first in our own hearts, forgiving us and helping us forgive and love others. Second, showing the love of God helps people change from enemies to friends and inspires us all to help each other.

Thank you for helping us do this.