Motherhood in the Conflict Zones of Burma

Motherhood in the Conflict Zones of Burma 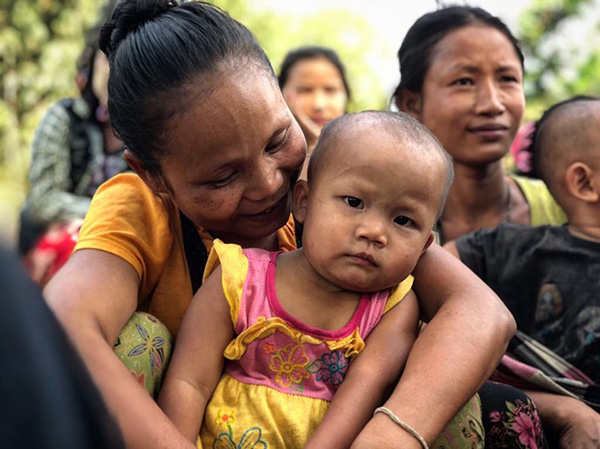 “I remember this clearly. When I was a little boy, I woke up one night because it was very very quiet. Too quiet. Growing up where I did, you’re used to the sounds of the jungle. You know, like clucking hens, the thudding hooves of our village’s water buffalo, chirping crickets. They put you to sleep, like a lullaby. I woke up because it was quiet. So quiet. Like the small creatures around me knew something was wrong too. I remember feeling very very cold, like ice, though it was a humid and hot night. That’s when the village dogs began to bark. My heart beat so loud, so fast I don’t remember the sounds of the mortars exploding near our village, but I remember the sickening way they made the ground beneath me shake. Before fear could overtake me, before I had time to react, the strong arms of a hero lifted me and my brother from our mat. In what felt like seconds, I was on my feet, pre-packed supplies on my back, and a strong, calloused hand stroked my cheek, my hero trying to comfort me. I knew we would run, but we would survive. I remember looking into the determined eyes of my hero, my protector, my mother.”

Long gone are the days in which war is confined to neatly delineated battlefields, and soldiers. Modern war rages in villages, backyards, and neighborhoods. War zones are littered with the crumbled remains of schools, playgrounds, churches, shops, homes, and the bodies of innocents. According to UN reports, civilian casualties account for over 90% of all war deaths, 75% of which are women and children. War today infiltrates and tears at the social fabric of communities, making active participants out of everyone, indiscriminate of gender.

Yet the world continues to see war from a predominantly male perspective. As researchers Takševa & Sgoutas (2015) examine, the prevalent “association between war and masculinity in popular culture and mass media continues to blur the presence of women and girls in situations of armed conflict.” A recent surge of research on gender and war has revealed, however, that women play a significant role in conflict zones across the globe. In conjunction with increased numbers of female soldiers, women play a significant role in acts of courage and resilience that simply keep life going around them.

Women are at the forefront of the preservation and continuation of culture and society. An examination of a woman’s role in a conflict zone would be incomplete without considering  the role of the mother, as “motherhood in particular has claimed an important role in the framing of women’s participation both in supporting and challenging [conflict].” Several interviews conducted in the contested states of Burma, where subnational conflict and civil war has plagued its civilians for the past seven decades, serve to demonstrate the key role of mothers in resisting oppression by keeping love, hope, and life going in the midst of war.

Most participants interviewed articulated that they were raised primarily by their mother. Seventy years of conflict has systematically taken fathers away from children as many men have been either killed in the fighting or are a part of resistance armies. Saw Gay Htoo, a 28-year-old Karen ranger explained that his siblings, and most children in his village, were raised solely by women.

“My dad was always off fighting, I would not see him for years at a time. So my mother raised us, on her own… Mothers, our own, or mothers in our villages… they were everything. Most of the men, they were either killed or off fighting, or forced to porter for the Burma Army. So what we had left were the women. That’s who we saw everyday fighting for us, for our lives, our safety, our happiness.”

Saw Gay Htoo explained at great length the sacrifices his mother made and the resilience she had shown to keep life going. Saw Gay Htoo and his family were frequently forced to relocate due to Burma Army offensives, yet his mother was always able to find a home for him and his siblings.

“[My mother] did everything, there was no man job or woman job, my mother took over every job. She farmed, she made clothes to sell for money, she carried everything on her back as we would flee an attack… When food disappeared she would always find a way…. She always made sure we had a “roof” over our head, even if only banana leaves and bamboo. She would try to get us to Burma villages, where they would force her to work too long of hours farming, so we would have a safe place to stay and a school to go to. When the Burma Army would come, and force the Karen to leave through violence, she would do it all over again.”

Saw Gay Htoo explained that though his childhood was marred by witnessing Burma Army offensives, it was still predominantly happy due to the sacrifices his mother made for him.

Saw Paul is a 63-year-old Karen pastor. During his interview, he too shared how his mother was the most significant person in his existence.

“My mother was an incredible and strong woman. My father was shot and killed in front of her during a Burma Army offensive. But she got away. She ran and she was pregnant with me. My mother was protecting me from the Burma Army before I was even born.”

Saw Paul explained that his mother was a medic and a soldier in the Karen Army before she married. According to Saw Paul, when she became a mother, her role transformed and she resisted the Burma Army by spreading love and the word of God.

“When I was a little boy I was filled with so much hate. I wanted to kill every single Burmese, and as a child I would play soldier and pretend to attack them. But my mother, I don’t know how she did this, her husband was murdered, and later a few of her sons. And yet, she was able to forgive and love her enemies. She taught me the importance to love, and to not hate others through God. Because of my mom I became a Christian, and now we fight the Burma Army with love, compassion, and by spreading the word of God to my people.”

Through her faith, Saw Paul’s mother eased the trauma of war by keeping love and hope alive in the middle of a war zone. 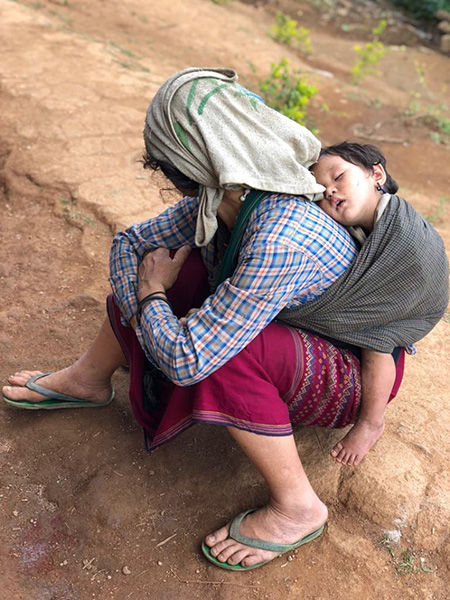 Saw Ku Paw’s mother, like those aforementioned, proved that resistance against an oppressive regime does not always take a physical form. Saw Ku Paw’s mother “took up arms” against the Burma Army, not with guns and ammunition, but with pencils and school books. She, as well as other women, actively fought for freedom by combating ignorance through education and equipping future generations with knowledge and tools for a brighter future.

“Yes my mother was a fighter, but not in the normal way. She called herself a teacher soldier.”

The pain in Saw Ku Paw’s eyes was visible as he described the terror and panic that would ensue during a Burma Army attack. According to Saw Ku Paw, soldiers would enter a village in the middle of the night, firing rounds of ammunition indiscriminately and setting buildings on fire with people trapped inside. Nothing was left unharmed. Soldiers would kill livestock, destroy crops, and burn all structures to the ground. Villagers would flee, moving stealthily through the jungle and looking for a safe place to rebuild until the Burma Army inevitably appeared again.

Due to the conflict, classrooms and school buildings were all but unknown to children in conflict areas. According to research conducted by the United Nations Educational, Scientific, and Cultural Organization, it is estimated that less than 30% of ethnic children in Burma have access to secondary education, a number significantly lower than the 52% of Burman children.

To prepare for these indiscriminate Burma Army assaults, villagers in the ethnic states pack “survival baskets.” Each consists of only necessities: rice, cooking pots, clothing. However, Saw Ku Paw recalls how his mother’s basket differed.

“When the Burma Army comes to the village, you cannot take much. Some food and clothes, anything you can carry on your back and run. But my mother, she would always run with textbooks. Those were her most important supply,” he said.

Saw Ku Paw’s mother would hike miles through mountainous, humid, jungle terrain with heavy textbooks and her children in tow, looking for IDP (Internally Displaced Persons) children to educate in any capacity she could.

“When we hid in the jungle, my mom would teach history, and the Karen language.  She would teach us how to write. We had no supplies but she teach us how to write with stones and charcoal from the fire, [our] jungle pens and paper…. Her work in life was to teach children hiding in the jungle, she would not let the Burma Army take everything from us.”

She fervently believed that education and revolution went hand-in-hand. She aspired to spread the hope of democracy and the tools of reformation through her lessons. That was her fight. That was her resistance.

Due to his mother’s influence, Saw Ku Paw has continued to further his own education and is now a medic and teacher in Karen State. He has treated hundreds of people affected by the conflict and inspires future medic students to follow in his footsteps.

The narrative of war is told from a predominantly male perspective, yet modern war is indiscriminate and comprehensive in its destructiveness and destroys those least prepared for it. If cultures and societies are to recover we must also study “where the community has improvised and survived and shown resilience and amazing acts of courage just to keep life going” – that is, the side of war led by women. The stories of the three mothers above provide a glimpse into the countless untold cases of women showing resilience and courage to keep life going in the most arduous of circumstances. 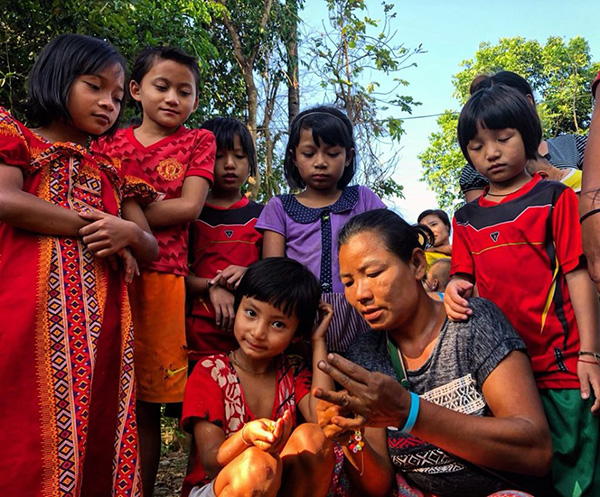