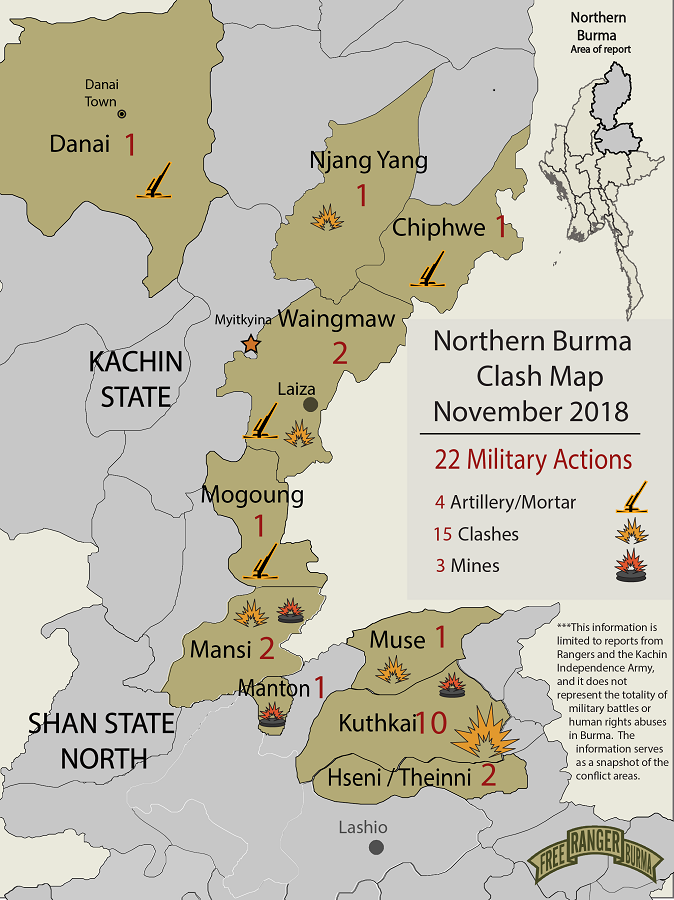 In Kachin State and northern Shan State, fighting remained steady in November and non-combatants continued to be caught in the crossfire. At least seven civilians were killed and eight injured, an IDP camp was hit by artillery and village homes were set ablaze by the Burma Army.

One civilian died and at least six were wounded by landmines in northern Shan State in November.

Two males from Sai Hkau Village in Kuthkai Township were riding their motorcycle when they hit a landmine planted by the Ta’ang National Liberation Army (TNLA) on November 9th according to Kachin Independence Army (KIA) reports.

In a similar incident in Chyauk Me Township, two women triggered a landmine while riding their motorbike near Chyauk Me Village. 20-year-old Lwin Hkam Yin was taken to the hospital in critical condition and later died of her wounds.

On November 22, Mr. Kyaw Hla from Mai Ngaw Village was travelling by car to the Buddhist umbrella decorating festival with his family when they drove on a landmine in Manton Township.

Hpakant Township is a land of jade mines. Private scavengers, day laborers vulnerable to dangerous conditions in the quarries, work without mining company permission to salvage whatever pieces of jade the mining machines missed.

The Burma Army shot and killed two such scavengers this month while operating as security for two mining companies in Hpakant Township.

On November 14th, soldiers from the Burma Army Light Infantry Battalion (LIB) 119 fired their weapons at scavengers at the Yatana Chye Kyauk Myet Company mine, hitting 24-year-old Kyaw Myo Htoon in the ribs, killing him instantly.

A 35-year-old Arakan man died on the 19th when he was shot by the Burma Army at the Nam Man San Shwe Compay Mine.

These are not isolated incidents. The Burma Army fired upon miners twice in Danai Township this past July.

Displacement and Looting in Kachin State

Most of the conflict in recent months has been focused in northern Shan State; however, the Burma Army has also launched several attacks in Kachin State in November.

At 0600 on November 13th, an estimated 100 Burma Army soldiers from infantry battalions (IBs) 37 and 121 assaulted the KIA 22nd Battalion post at Kawng Ja in Njang Yang Township. The fighting that ensued forced 30 people from nearby Sut Ra Village and 10 people from Kawng Ja Village to flee north into Sumprabum Township.

The villagers returned two nights later to pillaged homes. After burning the KIA post to the ground, the Burma Army had looted the villages and set fire to some homes, shops and kitchens.

On the 8th at 1500, a larger battle ensued when Burma Army LID 99 attacked TNLA soldiers resting in Da Hkai Sai Hkau Village. The fighting continued through the night and forced villagers to seek refuge in the jungle.

Between the 11th and the 12th LID 99 clashed three times with TNLA forces east of Tamungnye Town.

LID 99 stopped and searched two males on their way to a volleyball tournament on the 26th. The Burma Army soldiers blindfolded and beat the two men until they were released later in the day.

At 1925 on November 6th, a combined MNDAA and KIA force defended an hour-long attack by 80 soldiers from Burma Army LID 99. The clash took place in between Loi Tawng and Lung Wai and resumed the following morning at 0730.

On November 9th and 10th, the MNDAA defended against approximately 80 LID 99 soldiers around Hu Hin Village, leaving two MNDAA soldiers wounded. There was another clash between the two sides on November 12th.

One shell landed near the Lhoyo Church in the camp and the other shell tore through the roof of an IDP’s home. Neither detonated and no one was injured or killed.

Fighting Between EAOs Displaces Over 1,000 People

Clashes between EAOs in northern Shan State  have displaced an estimated 1093 people in Manton, Thienni, and Kuthkai townships from November 13th-17th.  Their displacement is due to fighting between the Restoration Council Shan State/Shan State Army – South (RCSS/SSA-S) and Northern Alliance members TNLA, MNDAA, and the Shan State Progressive Party/ Shan State Army – North (SSPP/SSA-N). At least four civilians caught in the fighting have died and four others were wounded.