After killing hundreds and displacing more than 30,000 villagers in northern Karen State in 2006 and early 2007, the Burma Army has significantly expanded its military infrastructure, replacing the villages and farms cleared during the offensive with a growing web of army camps and roads. The re-supply of these camps is now in its final stages, and the yearly improvement of the previously existing roads has now been completed.

Having completed much of this re-supply, new Burma Army units are now rotating in as old units move out. This means that there is an overall reduction of troops in this area now although the numbers are still higher than before the 2006-2007 offensive. There are now 8 divisional-sized units stationed in northern Karen State, down from 13 divisional-sized units (over 90 battalions) during the re-supply of November 2007-January 2008. There are now over 63 battalions (including Southern Command units) in the three northern districts of Toungoo, Papun and Nyaunglebin. The Burma Army continues to conduct isolated attacks and regular patrols in areas close to its camps and roads, however, in 2008 large-scale attacks have not yet occurred. With Burma Army camps now supplied and roads improved, villagers and those displaced remain constantly prepared for renewed attacks. 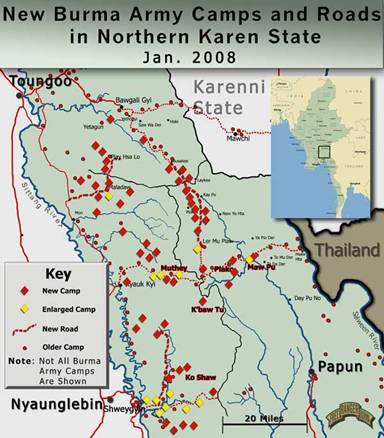 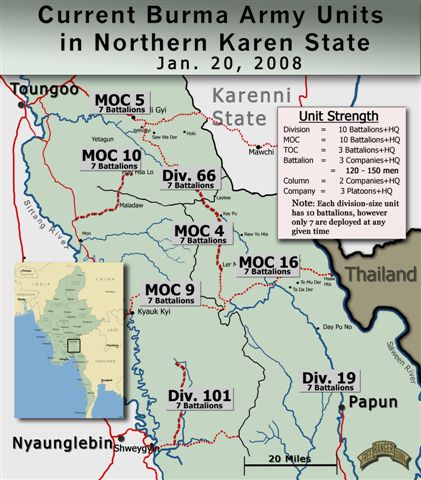 The following pictures show the Burma Army during their re-supply and expansion at several camps in northern Karen State. The pictures were taken by the newly graduated relief teams during missions to provide assistance to internally displaced people in this area.

The Burma Army continues its widespread use of prisoners as labor for the movement of supplies, construction of new camps, and manual labor at existing camps.