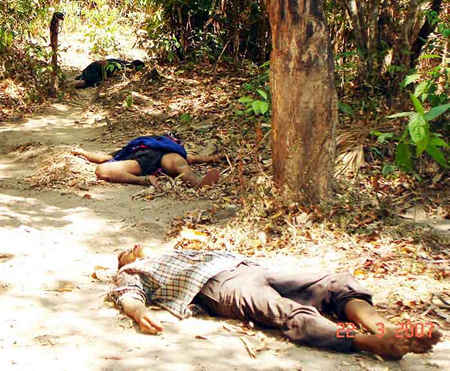 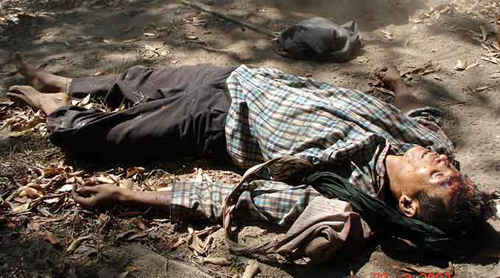 Photo 2: One of three villagers shot and killed from point blank range on 21 March.

This nurse, from Toungoo District, was also severely injured in the head, neck and legs by Burma Army mortar fragments when the attacking Burma Army troops shelled the area. She is now recovering. 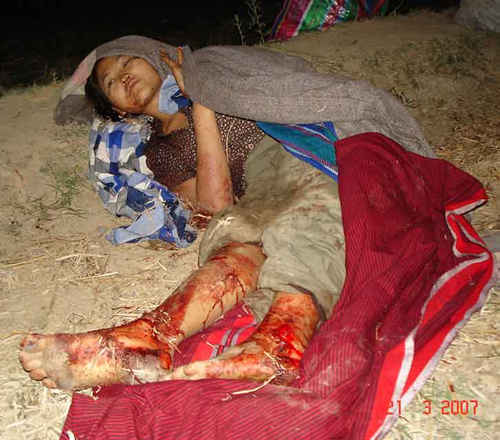 These are villagers from Tha Da Der fleeing as the Burma Army attacks toward their village. 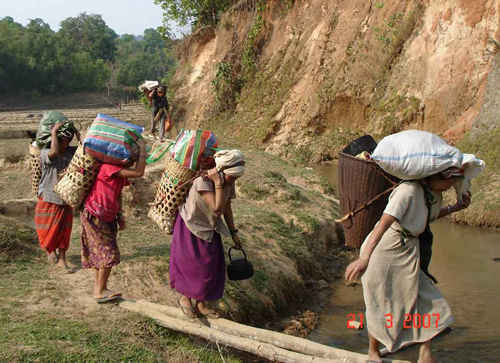 This field house was burned down by the Burma Army as they returned to Maw Kyo camp, the base from which they launched the attack. (correction: FBR initially reported that the attack came from Maw Pu camp. ) 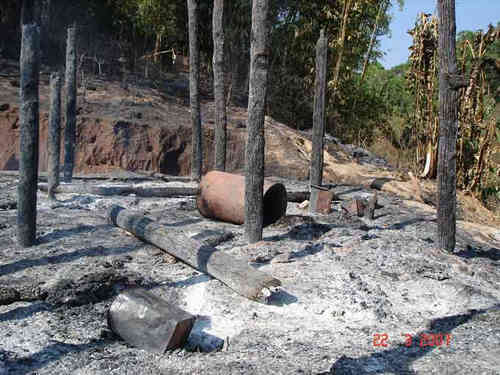 On 4 April, 2007, the Burma Army, based at Muthey, launched an attack on Keh Der Village Tract in Kyauk Kyi Township. The troops entered Keh Der Village, shooting and killing Saw Wee Ti, a 28-year-old villager. More than 900 villagers fled this attack and are now in hiding in the Keh Der area. Keh Der Village is located about 3 hours walk south of Muthey.

Relief teams are in the field now in this area, and this report will be updated as new information comes in.

With this latest attack the number of newly displaced people since the beginning of March has risen to more than 2,000. It was approximately one year ago, in February and March of 2006, that the Burma Army began the largest offensive against civilians in Karen State in more than a decade, killing more than 80 villagers, displacing more than 25,000, and constructing more than 33 new army camps. Since the beginning of 2007, the Burma Army has rotated all of its troops, has heavily re-supplied all of its camps, and has continued major work on the roads used to supply these camps.

While the offensive has slowed, the Burma Army has continued to pressure the people of northern Karen State with frequent patrols and small-scale attacks. At this time, the Burma Army has shifted its focus from an all-out offensive, to consolidating control over newly-gained territory, attacking IDP sites and villages to keep the population off balance, and to force them to leave or move to Burma Army controlled relocation sites. It has also increased efforts to block all movement of people and supplies between the plains and the mountains. The attacks which displaced 1,400 people last week are the most recent example of this.

The Burma Army Southern Command has now assumed direct control over all units in the field, bypassing the Military Operations Command (MOC) and Divisional level commands (these commanders are still in the field with their Headquarters elements, but do not control their forward deployed battalions). The Southern Command now has six divisional size units in the area of offensive in northern Karen State. These units are broken down into Tactical Operations Commands (TOCs) of three battalions each. There are three TOCs per divisional size unit. Each TOC is directly controlled by Southern Command, which has also mixed together the TOCs of different Divisions and MOCs in the same area of responsibility. The TOCs are also being rotated to different places within the operational area every one to two months, instead of staying in one area for the entire deployment.

These two new tactics of 1: direct control of all operation units by Southern Command and 2: rotation of troops and areas of responsibility demonstrate a more centralized control and the development of a new plan of action by the Burma Army. It is not clear whether this new plan means another more closely coordinated offensive, or a strategy of a more closely coordinated effort to cut all support to the Karen population and pressure them to either flee or submit to Burma Army control.

Comment: In the past, when different Divisions and MOCs operated more independently, there was a high degree of corruption and also space for certain understandings between the Burma Army and the local population. There is a concern now that with the centralized control there will be less opportunity for negotiation at the ground level, and a stronger and more concerted effort to control and dominate the population.

Burma Army activity in the Muthey area is based primarily out of two locations: Ku Thein Soe camp, an operations base office; and Ko Daw Ko camp, where there is a police base and one battalion is stationed. Ler Wah Soe is used for landing aircraft. Burma Army weapons and equipment include machine guns, RPG7s, M79s, 2.5″ mortars, mine clearing machines, and landmines. For transportation of men and supplies they use trucks, horses and convict porters and forced labor.

The BA sent two medics and used two Muthey village women to work in a new clinic, putting in charge one of the Burman medics. The medics and helpers are: Zaw Mein, a Burman, and placed in charge of the clinic; Thet Lwein, a Burman; Naw Htoo Mi Paw, a Karen; and Naw Nay Ku Paw, also Karen. There is very little medicine available, however.

Over 2,000 People Forced to Relocate:

Three village tracts, Weiladaw, Noh Gaw, and Patala, were forced to relocate to the Tetu relocation site. In all, over 200 families, comprising over 1,000 people, were forced to leave their homes.

The Burma Army calls this area “Zone 2.” LIB 350 arrived to this zone on 5 March, 2007. They set up one camp at the Tetu relocation site, putting company commander Thet Neing Aung in charge of the camp. The battalion commander is Thet Keing, and they are based at Nathagwein outpost.

Health conditions in the relocation site are poor and the villagers have little freedom of movement. Medicine is expensive and there is no way to make money inside the camp. A ticket to work outside the camp costs 1000 kyat per 15 days per person. Additionally, each family must pay the Burma Army 15,000 kyat a year for the land they are staying on.

In “Zone 3”, the relocation sites are at P’Den Gon and Pa Aye. The forced relocation of 7 villages started on 5 March, 2007, and was ordered by the Southern Command. The villages of Kaw Tha Say, Shukin Tha Ya, and Gomyit Tha Ya were forced to relocate to P’den Gon. The villages of Ma Au Pin, Toe Ta Dah, Letkauwa, and Shwe Dah were relocated to Pa Aye. These villages are from three village tracts and make up a population of over 1,000 people in the relocation areas. They are controlled by LIB 349 battalion commander Tet Neing and deputy battalion commander Zaw Win Myit, based at Bawgata.

New troops have been assigned to the Muthey area, in the Ku Thein Soe outpost: LIB 379, under Operation Commander Ko Ko Aung, from MOC 9; LIB 351, from the Southern Command; and one battalion from LID 11 .

On 28 March, 2007, 9 trucks from MOC 9 arrived at Kyauk Kyi Paut and dropped off 20 horses at Tha Pyi Nyut. The same day, they forced 25 villagers from Mawko to carry food to Saw Tin Der.

On 18 February, 2007, two columns under Burma Army Light Infantry Division (LID) 11, forced a Su Mu Hta villager, Saw Neing Oo, to guide them; on the way, he stepped on a landmine and was killed.

On 1 March, 2007, a porter carrying supplies for LIB 589 was injured by a trip-wire mine. He was then shot and killed by the Burma Army. The battalion commander’s name is Soe Aung.

In Hsaw Hti Township the Burma Army is sending food from Shwegyin to Koshaw, using horses and porters. Using the new road at Rokasoe, they use trucks to send food to Ler Doh Township.

In the last week of March, 17 trucks full of troops from LIDs 66 and 77 arrived at Minlan-thaziek. The current situation in Kler Lwe Htu District: LIDs 66 and 77 will start their operation soon.

At the same time, in the Saw Kader village tract area, the Burma Army attacked and captured one man, also burning down a house with all of its belongings. They also seized and questioned some women and children, releasing them soon afterwards.

The Shwegyin Dam is now almost finished and has flooded over 3000 orchards. Also because of the dam, the Burma Army moved Ta Nay Pah and Kyauknaga villages to Yin Aye Myaung and Thepyu Chaung. The Burma Army provided 1 acre of land for each household in the two villages. The two villages are comprised of 400 to 500 hundred families.

The Burma Army continues to repair the car roads and has completed the major resupplying of their positions throughout Papun District. They also take forays outside their normal area of operations to attack civilians.

On 28 March, 2007, in Kaw Pun (Bu Thoe) Township the DKBA, together with the Burma Army, entered Shaw Bwe Der and on the next day they stole three ducks belonging to Kyaw Kay. They forced the villagers to give them six tins of rice and also forced one person to go with them to be a waiter.

3.) The SPDC is beginning work on a car road to the north in the Bu Tho area, especially near the Thai border. This is the Papun area, under the Southeast Command; the troops operating are LIBs 340, 341, and 434, and IB 19.