On 20 March, 2007, Burma Army MOC 1 attacked the area of Tha Da Der and Hta Kaw To Baw villages, in northern Papun District, Eastern Burma. More than 400 villagers fled the attack and are now in hiding.

Less than one week earlier, on 15 March, Burma Army IB 379 and 380 attacked the Saw Ka Der area of southern Mon Township; more than 600 villagers fled their homes in the face of this advance. These villagers are now hiding in the jungle.

These two attacks have forced over 1,000 peopleand possibly as many as 1,400into hiding in the last week.

Burma Army troops launched the attack in Papun District from Maw Pu army camp (N18 25′ 04″ E097 13′ 33″); they went to the area of the village of Tha Da Der, located only 3 hours walk from their camp. They met resistance from the KNLA before reaching the village; three people were killed and one wounded in the fighting. As of the last report received, the Burma Army has returned to their camp; however the IDPs have not yet returned to their village.

Additionally, on 18 March, the Burma Army, based at Yetagun army camp, shelled villages in Toungoo District, south of Bawgali Gyi.

These are the most recent examples of increased Burma Army activity throughout the three northern districts of Karen State: since the end of February it has launched multiple attacks on villages, boosting supplies to its camps, increasing its use of forced labor and severely restricting the movement of people in villages under its control.

Free Burma Ranger relief teams are now on the ground in areas under attack. This preliminary report will be updated as information is received from the field. 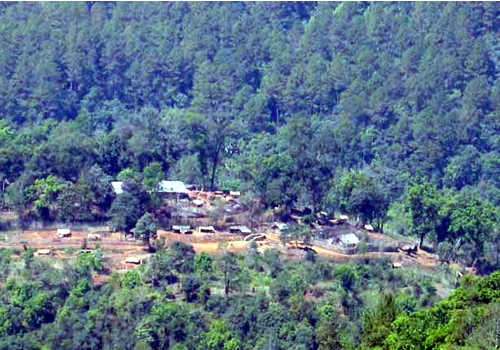 Maw Pu army camp, from which the attacks in Papun District were launched.