Prisoner Porters Continue to be Killed, as Survivors Work as Slaves

The Burma Army beat this porter to death last week as they continued to patrol in the Baw Kwaw area along the border of Nyaunglebyin and Papun Districts. He was found with severe blows to his head. His body was located by the local Karen Resistance and an FBR relief team. He is just one of many porters who has been killed while being forced to carry loads and work in support of Burma Army attacks against villagers in northern Karen State. 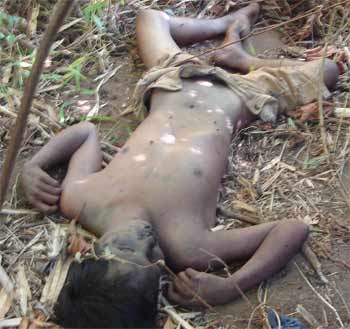 Porters are not only used during Burma Army attacks and operations. They are also kept at Burma Army camps to maintain the camp, collect firewood and carry water (please see reports from Dec. 19 and Jan. 9) The following photos were taken by a relief team in Toungoo District on 19 January. They show Burma Army soldiers at Busakee army camp overseeing the work being done by porters. **(please insert the next four photos here with captions)*** 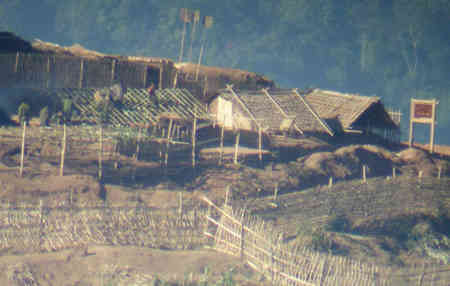 Porters building a new bamboo hut for the Burma Army 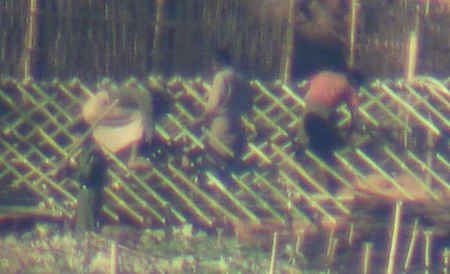 Close-up of porters working on a building 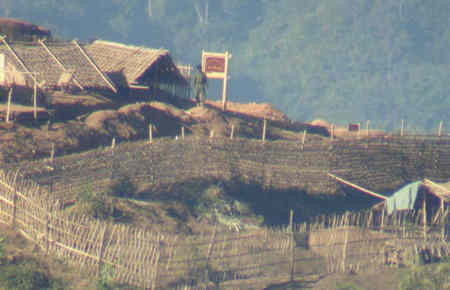 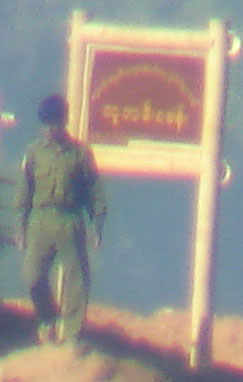 Busakee camp is one of the main camps from which the Burma Army launches attacks into northern Papun District and Southern Toungoo District. It is situated at the end of the Bawgali Gyi — Busakee road (approx: N 18 44′ 00″ and E096 56′ 00″). This camp, like many others in northern Karen State, has been significantly enlarged since the beginning of 2006. .

Note: While this report deals with prisoner porters, over two thousand villagers (men, women and children), have been forced to carry loads, act as human shields, sweep for landmines, clear roads and build camps and fences in Nyaunglebyn and Toungoo District in 2006 alone. This actual number is much higher but the 2,000 figure is what the teams have witnessed themselves or have verification of. This forced labor has been in support of Burma Army objectives including the offensive that began in 2006 and continues now in the Northern Karen State. During this offensive the Burma Army has murdered more than 76 civilians and displaced more than 25,000 people since February 2006. This offensive is continuing with weekly attacks against villages and IDPs already in hiding, as well as the ongoing re-supply and reinforcement of Burma Army camps.

On 8 January 2007, Saw Wah Say Htoo escaped from the Burma Army column he was being forced to carry loads for. He spent two nights in the jungle before finding the Karen Resistance in the area. The KNLA took care of him and on 11 January he was interviewed by an FBR relief team.

Saw Wah Say Htoo told the relief team, “I was forced to carry 6 81mm mortar rounds as well as more than 10 kg of rice. Altogether this weighed more than 32 kg (70 lbs). The Burma Army group I was with forced 25 of us porters to go with them. They also brought two Karen men who were used to translate intercepted radio traffic from the Karen Resistance, and to act as guides. I was taken from P’thi prison to Insein prison on 1 October. On the 3rd I was taken to Pegu and then to Shwegyin on the 4th. They kept me at their camp for two days and I was then taken to the front line. I was forced to work and carry loads at the front line until the day I escaped. One time they kicked me off the trail and down a steep slope and they beat me in the back with the butts of their rifles. They told me that I was just a prisoner and that if I died it was no problem. For this operation, they took 75 of us prisoners from each of six prisons: 1. P’thi 2. Myaw Mya 3.Pegu 4.Thahtu 5.Pa-an 6.Toungoo. There were a total of 450 prisoner porters used in this operation. We left from Shwegyin and moved to Ro Ka Soe camp. The operation began on 24 December, 2006 when we moved from Ro Ka Soe to the Baw Kwaw Area. The Burma Army troops were then reinforced and resupplied by MOC 10 in Maw Law. From what I saw, the group I was with was armed with one 81mm mortar, several 60mm mortars, RPGs, Many M79 grenades, and many light machine guns. The Burma Army which carried out the attack were two battalions from MOC 21. There were more than 300 Burma Army soldiers in the attack and most of them are teenagers. The SOC commander is in his 50s.

The Burma Army has used over 2,150 porters (this number has now increased after the Burma Army’s recent attack on Baw Kwaw) in this offensive and over 265 have been reported to have died, many who were executed. Among the porters in Papun District alone, there are over 20 child porters (boys under 16 years old from Insein Prison). The Burma Army is now using the term, transporter-Woon Htan, instead of prisoner porter to describe the people they force to carry their loads.

Background to the photo of the dead porter; Attack on Baw Kwaw from 9 January report:

Villagers from Baw Kwaw, which sits along the Bilin River, on the border of Papun and Nyaunglebyn Districts, fled when two battalions from MOC 21 and one battalion from MOC 10 attacked early on Monday morning. These same villagers already fled earlier in May and June of 2006, when the Burma Army attacked down the valley. The Burma Army has a plan to build a new camp in the Baw Kwaw area. It had started to build this camp, including the completion of a helipad, in June of 2006, but due to KNU resistance, high casualties, and the loss of many of their porters who escaped, they had to abandon that plan.

The villagers in this area have been on the run throughout much of 2006 because of multiple attacks by the Burma Army. This most recent attack is part of increased Burma Army activity and operations in Shweygyn and Kyauk Kyi townships of Nyaunglebin District.