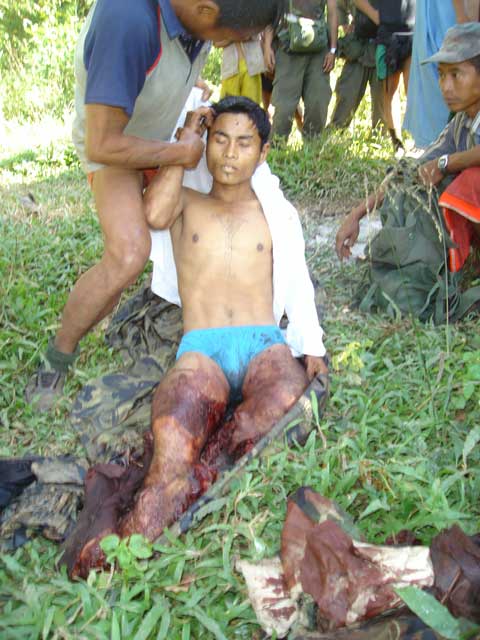 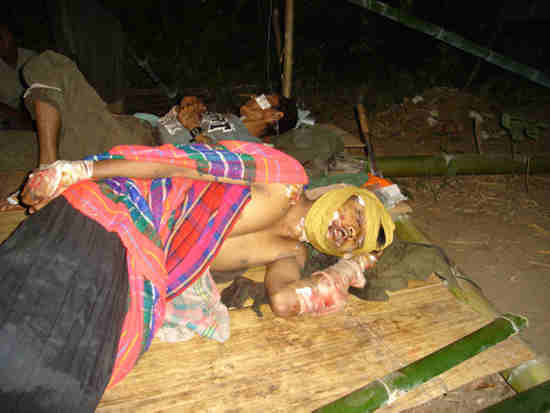 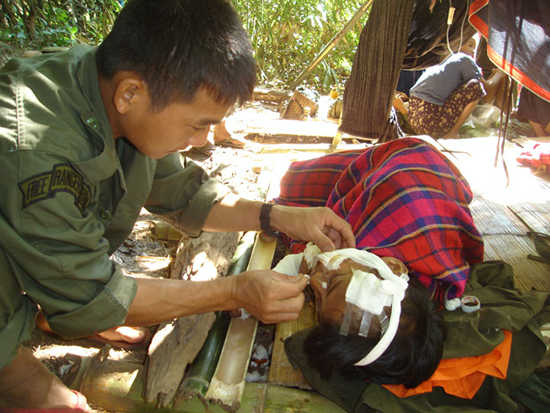 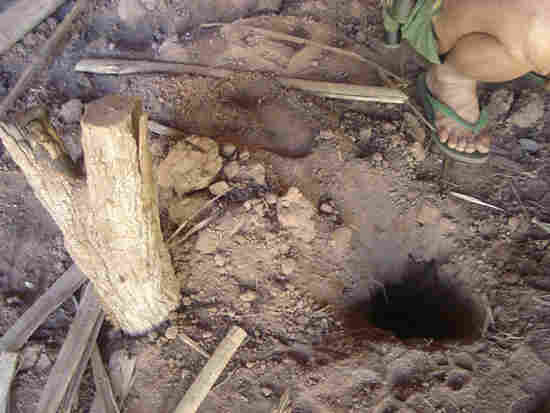 After chasing the villagers away from the Baw Kwey Day (Ti Ko) area of Mon township, the Burma Army entered the village and placed this landmine under a fireplace with the triggering device/pressure plate buried in the ground close to the fireplace. A group of resistance soldiers (KNU) who were providing security for the displaced people in this area triggered this landmine/IED. Three died and eight more were injured, four of them seriously. The landmine/IED was not the normal type used by the Burma Army. The hole dug for the mine was over one and one half meters deep and 15 centimeters wide. The hole seemed to be dug by an auger or post hole digger. The device was triggered by a blasting cap and what seems to be a piece of detonation cord that was placed on a stump and ran down to the mine. When the men gathered around the fire they stepped on a pressure plate that fired the blasting cap and ignited the detonation cord that set off the mine. There was a delay of three seconds from the time the men heard the ignition and the explosion. It is possible that the mine also bounced up one meter before it exploded or this was an anti-vehicle shape-charge that directed the explosion straight up. One man suffered massive head trauma and died instantly, one man lost both legs and died instantly and one man died while being carried to a mobile clinic. The survivors are now being treated and when stabilized, some will need to be evacuated for more extensive medical care.

In this area over 5000 people have been displaced, most are in hiding and suffer from shortage of food and medicine. The Burma Army continues it patrols and laying of landmines. Two days walk North of this area the Burma Army continues to burn villages and on the 6th and 7th of December landed more troops by helicopter into a forward position. A total of over 25,000 people have been displaced in this offensive in the Northern Karen State.

The Burma Army is now using helicopters to move troops and supplies to Busakee Camp, Toungoo District, Karen State, Eastern Burma. Busakee is located at the terminus of the Toungoo- Baw Ga Lyi Gyi- Busakee road and is one of the launch points for the Burma Army for this offensive that has displaced over 25,000 this year. MOC 15 commanded by General Aung Nyeing, is headquartered at this base. Busakee is located at: Latitude/Longitude: N 18 44′ 00″ E 96 56′ 10″ British 1 inch, 1:63,360 Map: Map Sheet 94 B/14 473 705

6 December 2006 Two helicopters each made six round trips from Pyinmana to Busakaee Camp, dropping off 68 troops and one load of ammunition and rations. Arrival times: Between 0830-1630 hrs. (All times local Burma time).