A Child Crippled, a Twin Dropped and Dies, People Used as Human Shields and Mine Sweepers and Burma Army Shoots at People Har

This is a message from a FBR relief team leader in Mon township, Nyaunglebin District, Northern Karen State, Eastern Burma. We are here providing emergency relief and will be sending more details this week. KHRG and CIDKP are also sending detailed information on this situation. 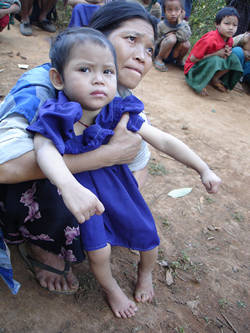 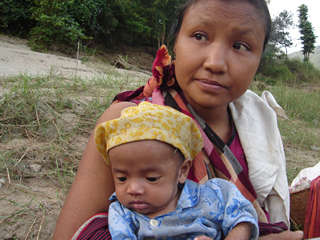 Yesterday I met a woman with a crippled 3 year old girl. I had met her in April in her hiding place after the Burma Army has chased her and fellow villagers into the jungle. It was the people of her village who were ambushed by the Burma Army. They shot dead a man and his 80 year old mother who he was carrying. The man’s 9 year old daughter (the Flower-That-Loves God; as per earlier reports) was shot and wounded but managed to escape.

Now the woman with the crippled girl was again on the run. When I last saw them in their hiding place the girl was healthy. I asked the mother what happened? She said that the Burma Army had come close to their hiding place and at that time her little girl became sick with malaria. They then had to run and hide for many days and because of that they could not give proper treatment. On the third day of running her daughter began having convulsions and was unconscious for a day and a half. When she revived, the girl was unable to walk or move her fingers very much. Our medic examined her and felt that the girl probably had cerebral malaria and the convulsions and resulting partial paralysis were one outcome of the sickness. We arranged to transport both mother and child to Thailand for better care and the chance the girl could recover and maybe walk again. We then continued on to Mon township. Being with the woman and trying to help her child made me feel very sad. At the same time it illustrated how the Burma Army tries to crush the people. They have chased over 25,000 people from their homes in this area, burned villages and shot civilians. These are the direct means of control. There are also many indirect means, such as chasing families into the jungle and forcing people with sick children to run. Or the woman we met last week, who was part of a group of 450 people fleeing to the Thai border. She was a mother of twins but told us that during an attack she had to run and carry both children in the jungle. She tripped and fell many times and more than twice she dropped one of the twins. That twin died before she could reach a safe area.

Just four days ago as we were walking we heard the firing of machine guns and mortars as the Burma Army in Muthraw District (near Kaypu) shot at villagers who were trying to harvest their rice. In May and June the Burma Army attacked villages along the main ridge line above Kay Pu and Naw Yo Ta and has established four new camps. They are now surveying a new road that when complete will divide the Northern Karen State into quarters. At the same time they are patrolling the villagers’ old rice fields and shooting any one who comes near to harvest their rice. Sometimes the villagers have shot back, often with only muskets, and the Burma Army is reported to be very angry with the villagers for trying to defend themselves. The villagers do not see any choice, they defend themselves or die on the spot, or if they can not harvest their fields, they will have to leave the area. In that area over 5,570 are in hiding but at least they can stay in their home districts- waiting and hoping the Burma Army will go back so that they can return to their homes and fields.

Rice is now becoming harder to buy, education in many places is on hold and it is very dangerous to move anywhere near where the Burma Army is operating. The Burma Army is placing landmines around the villages and trails.The Burma Army is expanding its system of camps and roads and there is no indication they will stop. Now in Toungoo District the Burma army has ordered villagers from 12 villages to act as human mine sweepers and to go ahead of the Burma troops and their bulldozer as they improve the Toungoo -Mawchi road. The people must also walk around the bulldozer as it works to act as human shields. This is to prevent possible attacks on the Bulldozer by the resistance who want to stop the new roads and subsequent domination of their homeland.

In the midst of all of this there are good things happening. The people do their best to share what they have and hold on, the resistance (KNU) tries to provide warning for the people, a rear guard when they have to flee, and facilitates relief from service groups who provide food and health care. Also a great encouragement and support is from all of you who care, pray and support the people here. When I was talking with the woman with the crippled girl, I thought of all of you who care and pray- thank you so much for being with us in this. We thank all of you who in different ways stand with the Karen people and with all the people of Burma.