Landmine Victim Recovers and Has a New Life 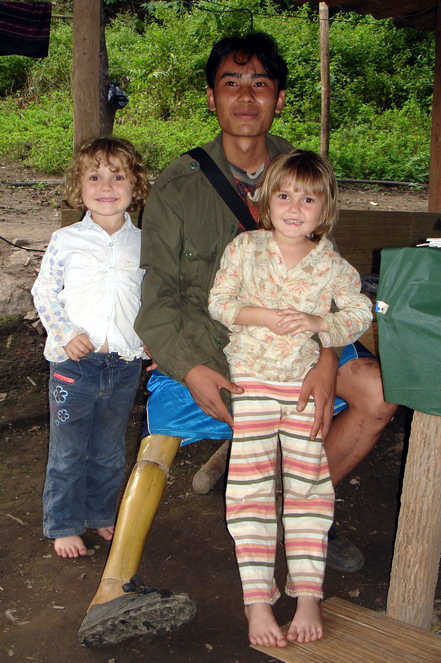 This is Saw Hsa Lu (Mr. Blue Star). He was the 17-year-old man who stepped on a landmine in January 2004. The Burma Army was attacking villages in the Northern Karen State. We were in one of the villages that had been attacked and were providing emergency assistance after the attack, when we heard an explosion just outside the village. We found this young man on the ground with his lower leg blown off. Eliya and other medics saved his life. Some of you have seen that scene on our DVDs. After he stepped on the mine and after being stabilized, he was carried four days to the nearest mobile clinic. There his father met him, and in his anguish, told his son it was probably just better if the son died because they were all IDPs, there was no way to take care of him and there was no future for him. Hsa Lu almost did die, but was evacuated on and finally ended up in Chiang Mai, where he received another amputation. His life was saved. It was in Chiang Mai that due to the love given him by Christians there, he decided he wanted to be a follower of Jesus. He then went to a refugee camp, but now is back in the Karen State and we met again at our training site. We have been asking about him the last two years and had told the local leaders that if he was interested we would like him to work with us in any capacity he desired, rather than just stay in a refugee camp. His father and mother, who are displaced people, are very happy he is alive and grateful for all the people who helped their son.

He has now decided to work with us and will be in charge of livestock and camp maintenance. We also hope to teach him some basic computer skills in the future. The photo is of him and Sahale and Suu. They both remembered him as he was the first landmine victim they saw when they were four and two years, respectively. He was carried through the village they were in and Karen had both of them pray for him. We thank God for his life and we ask for a good future for him.

Thank you all,
God Bless you,
Dave