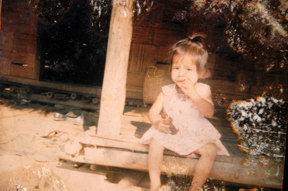 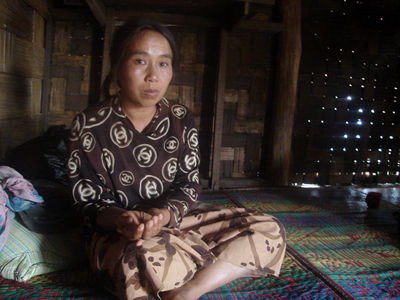 This story was originally sent out by a Shan FBR team who helped the mother and father of this girl escape the Ho Mong area of Southern Shan State. We had also helped one of the children with an operation to re-route his intestines in 2002. We knew of the story of the missing 5-year-old girl then and reported on it, but just this week we met the mother again. When we talked to her she suddenly broke down in uncontrollable tears and crying. At one point she collapsed and went into shock. The loss of her daughter is a wound in her soul and we felt sorrow as we tried to comfort her. So we decided to tell her story hoping that it might do some good.

We are with an IDP community and have two Partners relief team members with us and trying to help these people is a joint effort.

We are very poor. One day, we left our home to carry some rice and left two of our children at home. We were at the nearby village of Mai Lan when we were told that one of our children was lost. When we were coming back home, the head of the village asked fifty villagers to search for our daughter along the river just in case she drowned. But, they could not find her. The search for our little girl kept on going for seven days but they did not find her. Then the headman said that if I want to have a funeral ceremony for my daughter since they are not found. I was then told that our child might not be drowned.

We were told that the SPDC troops of the Burma Army, who used to come to the temple and our home, did not come here any more. This was because they had kidnapped our daughter. Since then, I could not eat and drink any more for nine days. Some villagers came to me and encouraged me that I had to live.

At that time in 1999, some SSA soldiers arrived in our village and one of the officers found out about my situation and advised me to go and stay in a safe IDP place. We are here with the help of the SSA who are looking after us. I have mental problems because of my lost child.

In the year of 2000, while we were already here I was questioned about my mental state- I cried all the time. People thought I was mad. Some people in the village answered those who questioned my sanity and told them that I had lost my child.

My situation is getting better here. The SSA is helping me and gives medical care. In 2000 I was shocked when a woman form Ho Mong village asked me about my lost child. That woman also asked me what the color of the dress was that my daughter was wearing when she disappeared. That woman showed me a picture, asking me, Is that your child? I was shocked when I saw the picture because it was a picture of my daughter. I asked the women where she got that picture. The woman answered that she saw my lost child in the weaving center in Ho Mong. The woman went on to say at that time the Burma Army was kidnapping children in order to sacrifice them alive in the foundation of a new Pagoda they were building. This was something that happened in other areas of Shan State.

The woman said that she saw my child being carried by a Burma Army soldier in a backpack. At that time my child was half awake and was sobbing. According to the woman, my child was given an injection of some kind by the soldiers. She thought it was anesthesia. The woman kept saying that she saw some SPDC soldiers gave my child more injections. The woman said that she ran away when the child began screaming. She went to tell the villagers and the villagers came to see that child. Some recognized her and said, Oh! Is that the child of Nang Khi of Nam Khat village?  She said that the SPDC soldiers injected one more anesthesia to my child and then put her in a bag pack and carried her to some unknown place.

The woman said that one night at midnight she had once found three children who were thrown into a big hole under the foundation on which the new pagoda was to be built. The woman said that my child was one of the three children who were buried killed alive there. They woman told me that she could not remember the date of the death of the children. I told the woman that if she could bring my child back to me, I would give her as much money as much as she asked for. She said she could do nothing but in a strange way she tried to encourage me by saying, Dont be depressed, your child is lucky since she has a chance now to live in the pagoda forever.

The mother was obviously distressed in recalling this and said, What can I say, I am very sad.

While some of the details remain unconfirmed the facts remain: on a mountain in Shan State is a mother who is grieving and barely able to hold on and whose daughter has been missing for 7 years.

Below is supporting evidence from the FBR team leader who initially investigated this report, counseled the family and then tried to go to the Pagoda.

Watch out for your kids, the Burma soldiers will capture them.

We hear that there were 6 adult prisoners and 3 children captured and put alive into the foundation of the Pagoda. This is unverified information and I have no real proof, only what people told me.

The families of the children captured all ran away – we think into Thailand except the one family of 5 year old Nang Sap who are with us here. One family was from Nam Din village and one was from Luk Lua both in the Ho Mong area.

I went to investigate on a FBR relief mission.

I saw the Pagoda with my own eyes on this FBR mission. There is a 24-hour guard and no one can go near it. This is because of the people buried inside. A contact took me close and I secretly shot a video and took photos of the Pagoda. I could not get inside the Pagoda because of the guards but I do have the video and pictures which I turned in with a mission report to the FBR and my Shan (SSA) leaders.

It is my understanding that some soldiers in the Burma Army have the belief that if they can bury human sacrifices, especially children in new Pagodas that they build, this will help them somehow. They believe that they will have spiritual powers to keep the Shan people from rising up. And this is also done to demoralize the local Shans

Also dirty things from dead people who were criminals are also often put into these new Pagodas. This is done evidently to contaminate the Shan sense of the sacred.

Now very few people go to worship at this Pagoda. Mostly these are visitors who do not know the history of the Pagoda. The name of the Pagoda is; Victory and Peaceful Country; Theng Di Aung (Victory) Be Niang Aye (Peaceful country).

Also in the girls house was her uncle who was looking after her while her parents were gone. The uncle was in the house drying tealeaves and when he went outside to check on the girl, he saw she was missing. He went outside he only saw boot prints leading into the jungle.

And a female tofu seller saw a girl crying in a weaving shop and when she asked who the girl was she was told the girl was from Nam Khat village.

In a separate incident but related to this case and involving another child;

I was told that at about the same time, Burma Army soldiers captured a child from near Nam Din village. They took the crying child from just outside the village and then killed the mother and beheaded her when she tried to intervene. They threw her body into the jungle. Villagers from Nam Din found the headless body of the mother. They had seen the mother go after the child. They followed the soldiers but came to a checkpoint and were stopped by other soldiers from continuing.

The village of Nam Din is now empty, and all the people have fled.

We have no hard evidence of what happened to the three children but we do know they are missing, we have heard the same reports of sacrifice by the Burma Army, and we do know the parents of these children are suffering. We will try our best to help.