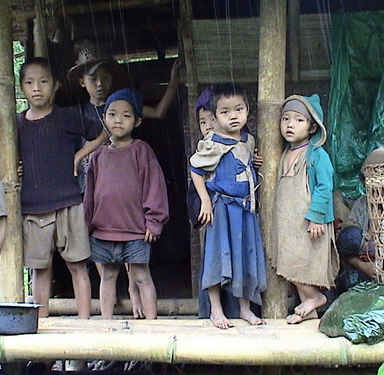 The Burma Army is currently attacking and patrolling in many areas of Mon Township, Nyaunglebin District. LIB 240 under MOC 16 is attacking into the Kyauk Pia area and on 29 June fired mortars and machineguns to chase villagers deeper into the jungle. Two villagers are now missing and feared dead from these attacks.

Also, troops from Military Operations Command (MOC) 15 are now moving in the area and there is also one battalion, LIB 522, under MOC 16, which has continued to operate in the northern part of Mon Township along the Nyaunglebin  Toungoo District borders. This battalion was in the village of Play Kee on June 27th, and is moving east towards northern Papun (Muthraw District). At least 28 villages have already fled into hiding in the jungle in the face of these new attacks, and the numbers could continue to rise.

On June 24, 2006 at 18:00 Burma Army troops shot at a Karen villager named Saw They Htoo who is from Hsaw Kah Der village in Mon Township, Nyaunglebin District, Western Karen State. Another villager, Saw Than Aung, from Ka Pa Hta village was shot at on the same day. He was not hit, however he dropped is basket and lost all of his belongings during the attack.

These attacks are part of new operations being launched into Mon Township from Muthey army camp which is located to the south of Mon Township, in the eastern part of Kyauk Kyi (Ler Doh) township in Nyaunglebin District. Due to these attacks, many people have again had to flee villages that they were only able to return to little more than one month ago. There are already 100 people from Hsaw Kee village who do not have any food left. This group is going from village to village asking for rice. The surrounding villages are also fleeing in the face of these attacks and so there is very little rice to share.

These operations began on June 23, 2006 when 200 men from LIB 536, and LIB 352 which are both under MOC 15, left Muthey army camp and moved to Kweh Kah Koh village. These troops stole any property they desired as they passed through the villages. They also ate many animals, of which at least seven pigs, and 32 chickens have been reported stolen by villagers. Troops from MOC 15 also entered the villages of Ka Ba Hta and Ka Hsaw Kaw, where they shot at villagers and destroyed and stole property.

The battalions involved are some of the same units that were attacking villages in the area of Baw Gwaw village earlier this month. It was thought that they would return to Kyauk Kyi town after moving back to their camps along the Kyauk Kyi  Hsaw Hta road, but have since begun new operations in Mon Township.

In March and April Mon Township faced attacks from Muthey army camp by troops from MOC 16. At the height of those attacks, more than 5,000 people were displaced in Mon Township alone. Since that time, the number of displaced people decreased by over half in Mon Township when Burma Army troops returned to their camps. The number of people forced into hiding could quickly rise back to more than 5,000 if villagers believe the Burma Army is moving into the area of their villages.

The KNLA has attempted to provide security for the people by warning the villagers of coming attacks and by engaging Burma Army troops as they attack villages. This has given the local population more time to flee, some security in their hiding places, and has managed to slow the attacks down. On June 27, KNLA soldiers engaged the Burma Army in the village of Nwa Hta. One Burma Army soldier was shot and killed in the attack, and two more stepped on land mines. The KNLA reported no casualties. Despite this effort, the Burma Army has not stopped.

As of June 24th, 28 villages have again had to flee in the face of these new operations. They are:

The Burma Army is planning to develop logging and jade mining operations near the village of Muthey (the site of the above-mentioned camp). They have invited International companies, as well as local companies under two businessmen, Maung Khaing and Ma Nan, to begin logging and developing jade and have requested an increase in Thai exports to Burma in return for these rights. It is believed that part of the increased military operations surrounding Muthey camp has been to ensure the Burma Army’s ability to profit from these businesses.

Burma Army LIB 601 and LIB 602 have begun new operations in the Kwey Der village tract area, forcing all of the villagers in the area to flee their homes. These two battalions, which are under MOC 21 and are based at Kyauk Lo Gyi camp (Paw Wah Ta in Karen), moved into the area between the Bawgata River (They Law Klo), the Shweygyin river (Kay Law Klo) and the Kaw Law Klo on June 18. All of the villagers are from this area have been displaced, and have been unable to return because of the continued presence of Burma Army troops in the area.

On June 15, 2006, LIB 567 and 568 destroyed 6 houses in the village of Kwey Der, Southern Toungoo District, Karen State. They also destroyed a valuable traditional Karen drum which belonged to a village woman named Naw Doo. The next day, these same troops destroyed 18 houses in the village of Ler Kla Der. That afternoon they continued to the Hu Mu Kla village where they burned a number of homes as well. The exact number of homes and barns burned there is not yet known.

More recently, on June 26, 2006 the following 12 villages were ordered to send villagers to Kler La to porter for the Burma Army.

On June 15, 2006 villagers from Play Hsa Lo were forced to begin building a fence around the Burma Army camp located near the village. The Burma Army units which ordered this work are from TOC 2 under MOC 16. As of June 23, the fence was not yet completed.

On June 18, 2006 villagers from the areas surrounding Kler La and Kaw They Der villages were ordered to meet in Kler La. The next day, these villages were taken to Bu Sa Hkee village, where they were ordered to begin clearing land for a new forced relocation site. According to reports from the area, the Burma Army plans to force more than 70 families onto this site as soon as the land is cleared.

On June 9, 2006 we reported about villagers who were forced to pay the Burma Army to build homes in the rice fields of other villagers. The villagers have now been forced to destroy the homes they built and move to a new area. None of the 15,000 kyat that they had to pay in order to stay there was returned to them. They were forced to leave the area by Burma Army LIB 590 and 599, which are both under the Southern Command. This is the same Command that includes LIB 439, the battalion that originally forced the villagers to move to the field and then left with the villagers’ money, as well as LIB 351, the battalion that replaced LIB 439.