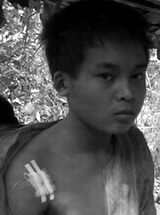 This report is a more in-depth coverage of the murder of two Karen villagers including a one-legged child that we sent out earlier as well as a recent (May 18) interview of a surviving family members.

Saw Heh Nay Htoo, his father (Saw Du Kaw) and younger brother (Saw Peh Lu) had been working on the family farm and were on their way to have lunch at their farm hut when they were shot by Burma Army troops. They tried to run but since the 14-year-old boy, Saw Peh Lu has only one leg he could not run fast enough to escape. The troops closed in firing and killed his father, Saw Du Kaw, and his 14-year-old brother, Saw Peh Lu. Saw Heh Nay Htoo was shot twice and injured on his hip, backbone and right armpit. An FBR relief team met him at a jungle clinic on April 15, 2006 and interviewed him about this incident . After the shooting, Saw Heh Nay Htoo ran to his village to get help carrying his father and brother. Most of the villagers had fled, but his mother (pregnant and sick) was in his house and she went to get help for her sons and husband. They heard more shots from the area he had left his brother and father. He thinks these shots killed his brother and father. He ran into the forest to hide, meeting his mother on her way back from getting help. Other villagers carried him to a clinic in a new IDP hide site of over 600 people. He and other land mine victims are being cared for at this new clinic built to care for these new IDPs. He arrived at the IDP site on 12 March 2006. He heard from other villagers that his father and brother were dead and buried near the village.

“We were coming back from farming to have lunch at our resting place. I went forward and they followed me (my father and brother). Suddenly, I saw a white bag at our resting place and I stopped and listened. Suddenly, they (Burma Army) fired at us. At first, I didn’t know that the bullets hit me. I didn’t see my father and brother either. Suddenly, my father shouted, my leg was injured, I tried to get someone to pick me up. I saw my brother’s shin covered with blood, but I knew that he wasn’t dead yet. I ran into the bushes. When I was on the move for 30 minutes, I heard an explosion again. I realized that the Burma Army approached them and fired at them at close range. When I arrived home, I asked my mother, where were the other people? She replied.. everybody was running into hiding. But, my mother was at home because she was sick and pregnant. However, she tried to get someone to go pick up my father and brother. When our friends arrived, they tied up a hammock and laid me in it. And then, I left my mother and brothers. During this attack there was a column of Burma Army troops divided into three parts. Because of this, my journey to the jungle clinic took 7 days.”

On May 18, 2006, a relief team met Saw Heh Nay Htoo’s mother, who had her eight day old son, Saw Dah Eh “youngest or lasting love”, in her arms. Her other sons were there also. She asked about her injured son and the team showed the family photos of him and every person in the family was happy. One younger brother, Saw Peh Shwe (11) years old was crying and said; “I want to see my other brother’s photos too”.

His mother said (about Saw Heh Nay Htoo), “I didn’t know if he was alive or not. This is the only son that can help me now. His four younger brothers are so young”. The team encouraged her and told her that he was healthy and living in good conditions. His injuries are almost healed. The team talked to the family for about an hour and interviewed them about the situation.

“We started by asking her name, age and occupation. When we asked her about the shooting of her husband and two sons, she was crying and said, “I saw my son’s whole body covered with blood. I held his hand and said, ‘You are going to die.’ He was holding my hand firmly and said, ‘I will go to find someone to pick up my father and brother.’ I said no to him, because I was worried that he was going to die. He told me that his father’s leg was injured and his brother’s chin was injured. At one point he told me that he could not walked anymore. And then, he asked me to find others to pick up his father and brother. I left him and his other brothers. I went through the darkness without light. Everybody was hiding in fear of the Burma Army and I could find only one man with a radio, and he contacted others to carry my son. On my way back from them, I was close to meeting with the Burma Army troops. My injured son left all of his brothers and met me half way. People helped carry him to the clinic where he is still staying.”

When we were asking her about her son with one leg; she cried and said, “He was very thoughtful/aware of others(or He was very clever/observant). Whenever we asked him to do something; he never refused. Even though he has one leg, he tried to do everything. When people went to the place he was buried; beside my son there was a big stick, many bullet casings and some human brain were on the ground. Everybody told me that my husband and son didn’t die immediately. The Burma Army tortured them unto they were satisfied and then finished them. The Burma Army buried them, but my husbands legs were sticking out (of the grave) and dogs ate the meat off of them.”

When the relief team asked her how did you feel when you heard about your husband and son was killed? She replied, “Immediately, when I heard about my husband and son, my heart almost stopped working. My heart really pained me. I think if I died with them there will be a better world for me waiting. I was depending on my husband and he provided for us. Whenever I am thinking about the situation, I don’t want to live anymore. Now, the person who is holding my heart together is my older sister, if she was not, I would definitely go crazy. I think if they killed us all together at the same time we would be in peace.”