Three more letters posted by the Burma Army during their operations here (Mon township, Nyaunglebin District) were found this week. There have been a total of four letters found and two landmines laid close to the signs.Two of the letters are as below and two have only the first five clauses. Landmines were found near two of the signs, 15 yards and 3 yards away. A pig stepped on one of the mines and the other was discovered by the resistance before it could kill anyone or any animal.

“For the hiding villagers”

(2) People must move to Muthey or beside the car road at the relocation site as soon as possible, by 5 May.

(3) Our troops do not want to shoot and capture.

(4) By this date (5 May) anyone who stays in this area will be shot. This is a command from above.

(5) You can come back when this area has peace.

(6) Karen soldiers, do not do work that God and angels don’t like such as putting landmines and setting ambushes. Make peace and live together happily with your family. 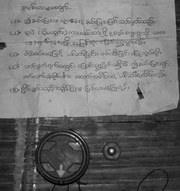