Report Summary:   There are now Over 15,500 people displaced in North, Northwestern and Western Karen State as the Burma Army expands its attacks into Northern Karen State. 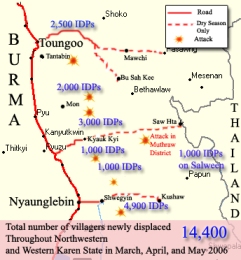 * Burma Army burns 50 homes in new attack in Muthraw District, Northern Karen State. There are now over 1,000 people in hiding from this attack. With this new number of people in hiding the total number of displaced people due to this offensive is over 15,500.

* Burma Army battalions LIB362, and 363 of MOC 10, from Ler Mu Plaw and Mo Pu Camps, attacked the village of The Boe Plaw, in Loo Thaw Township, Muthraw District and burned 50 houses on 9 May 2006. 1000 IDPs from that area moved to hiding places near the Yunzalin River.

* This is the third attack in Muthraw District and is part of an offensive that has been so far been concentrated in Nyaunglebin and Toungoo Districts, (Western and Northwestern Karen State).

(Over 1,000 displaced people are not included in the count above as they have already fled to the Salween river and some of these have arrived at refugee camps. If these people are included, the total number displaced since the end of February 2006 is over 16,500).

Notes: a. MOC 15 with seven battalions have now arrived in Toungoo. It is not known if these new battalions will reinforce the ongoing attacks or where they will be sent. b. Ro Ka Soe (not Saw Ro Soe) is the name of the new Burma Army camp being built near Ler Wah, Ler Doh township, Nyaunglebin District.