In hiding place shelter, April 26, 2006. This is how people are living now as they hide from the Burma Army 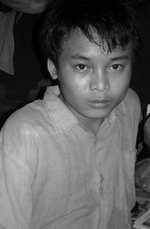 This boy age 16, who was shot 3 times by Burma Army soldiers in March is also here. His father and bother were killed at the same time he was shot, and he has been in hiding or on the run up until now. Today, 29 April, the two battalions that are searching for these people have gone to their camp to re-supply and are expected to come back to this area in a few days. These people may need to move again if the patrols come close.

One of three gunshot wounds suffered by 16 year old boy

(Note: Yesterday, to the east in Muthraw district, the Burma Army burned down houses at Ta Kaw Ta Baw . The people of Tha Da Der (only 30 minutes from the attack) and Tee Mu Der have now fled into the jungle).