Message from a Relief Team Leader and Situation Update

.I am sending this from in the mountains, where we are with
300 of the 2,000 displaced people in this immediate area. The others are
hiding in groups of 200-400 people. Yesterday it rained hard into the night
and today it is still raining. The team here helped to carry children and
some of the peoples’ possessions to this site from the other side of the
mountain as they were exhausted from days on the run. 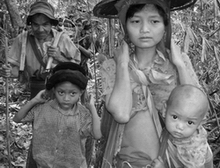 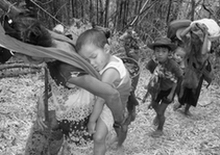 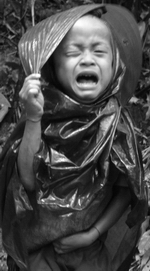 Yesterday was awet miserable day for the families as they were trudging up steep trails andslipping down narrow ravines carrying their possessions and their children. Oneman,
burdened with a tremendous load, with his wife who was carrying a large basketon her back and baby on her front in front, and watching his 5 or 6 year olddaughter slip and slide down rocks and mud, exclaimed, “This rain and theBurma Army are both too bad for us, it is ridiculous”. A woman replied,” Yes, they are both out to crush us”.

When they arrived at the place where it was thought to be safer, there was notime to build shelters. People huddled together in the driving rain underpieces of plastic or banana leafs. Some of the babies began to cry.

To see mothers soaked and shivering as they kept a smallpiece of plastic over their babies, made us all feel sorry. We also felt angryat the dictator’s Army and the their government.

About the only good thing about this rain from our perspective, was that it is also causing problems for the pursuing Burma Army forces. They had evidently lost the way, became confused and one the soldiers stepped
on their own land mine they had laid for the villagers. The rains have disrupted their supply lines and sapped their morale.

Here in the hiding place morale was amazingly good and people laughed and shouted at each across the swollen stream-“…Hey what’s wrong with your shelter?…” Can you give me some plastic..No can YOU give me some?..”, and
both then laugh as nether has any plastic to give or take.

Today during a break in the rain, the Karen people were up and making sheltersfrom leaves and bamboo. They were smiling and talking and offering us food.They have barley enough rice to eat themselves and little else to go with itbut every family we talked to offered us a meal. 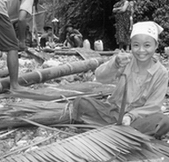 As I made this report a group of children gathered around and laughed as they saw pictures of themselves that we were sending out to you all. As we huddled under the same plastic when the rains came again, a mother came into our shelter carrying a newborn baby- three weeks old. She said she had given birth and then had to run for her life 5 days after giving birth. She looked at me and smiled. She was glad to be alive. 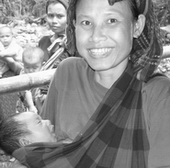 Now it continues to rain but in the middle of the rain a small group of people gathered to pray. They told us, “We have trouble but we can pray, God helps us”.

Here as in all the areas of Nyunaglebin, Toungoo and Muthraw districts, all of which are hit by this offensive, the immediate needs are for security, food and shelter.

The people in hiding and on the move need plastic sheeting in for shelters, flashlights (as they now have to often move at night to evade the patrols), more medicine, and money to buy rice, hammocks and clothes.

In terms of sustaining relief there is also a need here for better communications equipment, mules and horses to carry relief supplies and cash for transportation and communications.

Thank you and God bless you,
A relief team leader.

The attacking Burma Army forces here have now divided into two groups. One
group is somewhere on the Kyauk Kyi- Hsaw Hta road and two battalions – IB
241 and IB 242 are now heading to Htee La Baw Hta camp to re-supply. IB 241
and 242 are the main tow battalions now hunting the 2,000 + displaced people
in southern Mon township. After they re-supply they will probably continue
their patrols.
More than 2,000 people in this area are in hiding and due to the heavy rains
(very unusual for this time of year), the living conditions are difficult.
Many are sick with malaria and dysentery.

In Northern Mon township, LIB 568 led by Aung Lyin Tun attacked Yulo village
and looted 15 ancient Karen Drums- these drums are heirlooms and are made of
bronze, copper or silver.

*There are 2,000 more displaced people in the northern part of Mon township,
for a total of 4,000 who are still in hiding. Two days ago, a Burma Army
battalion conducted
a search and destroy mission but did not find any IDPS and have now returned
to their camp in Maladaw.

*New attack in Muthraw District: (Muthraw or Papun District is to the east
of Nyaunglebin District.)
The Burma Army launched a two battalion sized attack against the village of
Tha Dah Der on 27 ad 28 April but have so far failed to enter and destroy
the village. The Karen resistance (Karen National Union- KNU), operating in
small teams stopped the two battalions and the heavy rains have hindered the
Burma Armies ability to re-supply and evacuate wounded.
Villagers in Muthraw District are now prepared to flee, as there is news of
Burma Army reinforcements approaching.

People who were forced this month to go to relocation sites report that they
have no shelters there and live under the trees in the rain. There are still
over 2,000 people in hiding and the Burma Army has burned
the village of Tha Yae U on 22 April at 0900 hours. The 30 families of this
village have all fled.
Later, on 24 April, the Burma Army burned down the village of Kaw Me Ko.
Both villages were burned down by battalion LIB 10 (from Baw Ga Lyi Gyi),
Toungoo District. LIB 10 Commander Soe Mynt sent Major Win Zaw Oo of LIB 10
to lead the troops in this action.
On the Toungoo-Nyaunglebin District border the village of Yae Lo was
mortared, its church destroyed and people driven out.
On 27 April the Burma Army battalions LIB 522 and LIB 568 burned down seven
houses in Poe Mu Der village at 2pm.
On 28 April Burma Army troops of LIB 522 and LIB 568 attacked Kwe Kee
village and at 0900 they burned down 5 houses.
LIBs 522 and 568 are both under the command of Tactical Operations Command
#2. TOC#2 is under the control of MOC #16, the same MOC that started its
offensive from Muthey Camp in March, swept through Mon Township, then
divided into to two TOCs, one still operating in Mon Twonship, TOC #1, and
one TOC, TOC #2, now in Southern Toungoo District.. TOC# 2 is commanded by
KoKo Gyi based out of They Pu/Pisaloe Camp.

Troops of IB 53 commanded by Myo Thoo Ya and located at Sha Ze Bo, ordered
the villagers not to sleep at their fields and restricted all movement. If
any villager is seen going out to the mountains or sleeping in their fields,
they will be killed. Note: This is an attempt by the Burma Army to cut all
contact between the displaced people, the resistance and the people of the
plains.

TOC#1, commanded by Thin Aung, orded 2,000 villagers of the Kler La/Baw Ga
Lyi Gyi area to carry their food supplies. This is a major resupply of all
forward camps on the Kler La- Busakee road. Naw Soe, Busakee and They Mu Ko
camps.
The rains have come very early this year and the Burma Army cannot move
vehicles on this road now like they usually can in April.

**The FBR team operating in this area has reported that in addition to this
information, they themselves are now escorting a small group of 19 families
who have run out of food and need plastic for shelter and many are sick.

Over 3,000 total people in hiding now. The Burma Army is sending supplies
from Shwey Gyin town to its camp at Kushaw. Military Operations Command
(MOC) #21 is operating from here.

Thank you to all of you who are helping in many ways. Your care and
assistance is a physical and morale boost for the people here and the relief
teams. Thank you also to the media who is helping to shine a light on this
situation. Your hearts of concern and your efforts give us all hope.