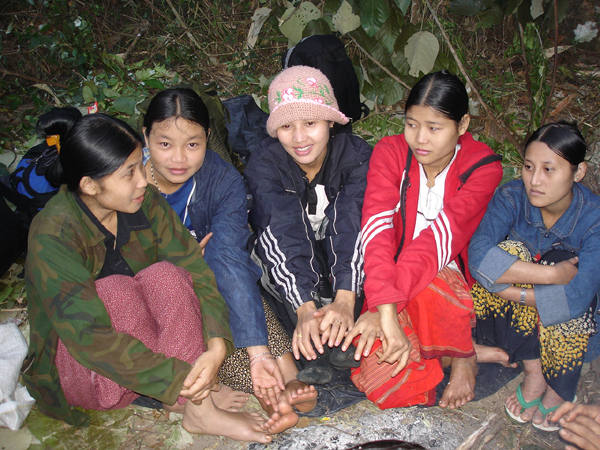 Naw Bey Bey, age 22, was captured in late January 2006 by Burma Army troops in the village of Shazebo while on her way back from visiting her family in her native village of Ma La Gaung, Toungoo District, Karen State. Her mother had recently died of an illness and her father had asked her to come home to be with the family. Upon her return to Toungoo District, she was riding with a husband and wife in their oxcart when, they were stopped by Burma Army soldiers. All three were captured. Villagers in the town of Pay Sa Lo, where a new Burma Army camp has been built, reported seeing them there after they were captured. According to the villagers, they were told to wait in the town while the soldiers returned to their camp with all of the money and belongings they had confiscated. When the soldiers returned, the three were taken into custody. They have not been seen since, and their whereabouts are currently unknown.

Note: This nurse, Naw Bey Bey, is part of a group of Karen nurses featured in the 2006 Day of Prayer For Burma letter. She is on page 9 and is the second woman from the right in the photograph. She is wearing a red sweater. She was also mentioned in a message out as part of a group of nurses who took great risks to help their people. Below is an excerpt from the report written last year during a relief mission in Toungoo District, North Western Karen State, Burma.

“The local medics were also amazing. This was a group of five young Karen women who traveled with us while we were in Toungoo District. They were all in their early twenties, pretty and full of energy. We had to walk over many mountains (the mountains in Toungoo District go over 8,000′ and valleys down to 1,000′) and these ladies did this in rubber slippers. It was cold every night and they all huddled together in one group, sharing blankets and living no better than the IDPs. While moving, we were often very close to SPDC outposts and patrols and one morning I asked the nurses if they were afraid of the Burma Army. “Yes, we are very afraid”, they answered. “But we want to help our people, we want to help our Karen Nation, so we try”. They smiled and said they were happy to have this chance to serve. We were inspired by these women and their presence brought a real peace to the IDPs.”

Please pray for this young woman and her freedom. Thank you ,

We just completed a relief mission to Internally Displaced Persons (IDPs) in Toungoo District, Karen State. In addition to the reports and photographs we have been sending, I wanted to add this message. I want to write what is on my heart, what I have seen with my eyes and felt with my hands. We try our best to be objective when we send our reports from here in the field and we also want to make sure the human element is apparent. Bad things are being done to fellow human beings now and oppression and attacks continue. In spite of this, these people still try to survive and hold on to faith, love and hope.

The Burma Army continues its campaign of oppression in this area; attacking villages, murdering people, forcing people to carry loads and labor for them, and building roads. Because of attacks by the Burma Army, Toungoo District has over 20,000 IDPs.

While our team was in Toungoo District in January 2005, we heard that 440 villagers were in hiding following an attack by the Burma Army on 26 December 2004. We had brought with us medical supplies, clothes, educational and school supplies, bibles and hymnals for people who asked for them, toys for children and clothes.

It was night when our team walked into the place where the villagers-now IDPs- were hiding, and the first thing we noticed was about 50 people standing in a small clearing under the night sky. Some had candles; some had lit pine pitch and were holding them up so they could see. When we walked in there was silence at first and then when we said “Na La Gwey” (“Good Night”), they suddenly surged forward smiling, laughing, and grabbing our hands. They kept saying “Da Blu, Da Blu” (“Thank you, Thank you”), and “Thank you for coming”. It was wonderful to be so loved and welcomed but at the same time I felt sad and worried. Did they think we could save them? Did they think we were the beginning of a good change in Burma? We could not save them and as for change, we can only hope that we are a small part of that positive change.

I felt compassion and a love for these people. I wanted to help them, protect them, and make sure they could go home. In reality all we could do was love them, remind them they were not forgotten, give them temporary relief and tell their story. We could shine a light, however small into their situation. That night the team went and visited with some of the IDPs sleeping close to us. None had real shelter; most of the families just lay on the ground sharing blankets. Some slept under trees with a lean-to of leaves over them. The scene looked very desperate and pathetic. Fathers and mothers had been stripped of their ability to take care of their children in a safe home. The elderly sat around small fires, trying to stay warm. The next morning we set up a medical and dental clinic and distributed relief supplies and clothes. I began to take pictures and as soon as I did, parents came up and thrust their children up to me. They wanted me to take their pictures and they had a real urgency about them. It was as if their children would not count if their picture was not taken. I kept taking pictures.

The team treated patients and conducted surgery on one man who had been badly beaten by the Burma Army. As the day went on the IDPs became happier and happier and we all began to feel a closer relationship. Everyone sleeping together and eating together meant there were no barriers, physical or mental

We talked with two villagers who had lost their legs to Burma Army landmines and to a 13-year-old boy, who had been shot in the arm by the Burma Army when he was 5 years old. His arm was still badly scared. We talked with the father of one of the two men the Burma Army had captured and killed when they attacked the village in December 2004. We also met the sister of the other man taken at the same time. She said she misses her brother but heard that he is dead and is very sad. She is married to a man who has two bullet wounds from an earlier SPDC attack that left two of his friends dead. He smiled at me and said, “I am a farmer, this is our land, and we have to try”.

One of the things that struck me most was the positive attitude of the people and their resiliency. They smiled, joked and tried to give us food they had been saving. The local medics were also amazing. This was a group of five young Karen women who traveled with us while we were in Toungoo District. They were all in their early twenties, pretty and full of energy. We had to walk over many mountains (the mountains in Toungoo District go over 8,000′ and valleys down to 1,000′) and these ladies did this in rubber slippers. It was cold every night and they all huddled together in one group, sharing blankets and living no better than the IDPs. While moving, we were often very close to SPDC outposts and patrols and one morning I asked the nurses if they were afraid of the Burma Army. “Yes, we are very afraid”, they answered. “But we want to help our people, we want to help our Karen Nation, so we try”. They smiled and said they were happy to have this chance to serve. These women inspired us and their presence brought a real peace to the IDPs. Everywhere we went it was the same, the local people were full of energy and hope and believed that one-day change would come. In the mean time they would work hard, pray and hope people in the outside world would come and help. But they told me, “We do not put our faith in the world or other nations, we have our faith in God..so we have hope”. Enroute to this IDP hiding place we stopped at many other hiding places as well as villages that had been rebuilt after attacks by the Burma army. We provided relief to as many as we could and treated a total of 3,844 patients.

In spite of the close presence of the Burma Army, every village and IDP site were full of people who had not given up. They kept their belongings packed every day and were ready to flee at a moments notice, but they had hope and have not given up on their homeland. Thank you to all of you who pray and help. You are real answers to our prayers and the prayers of the people here. We always tell them that there are many who love them and enable us to help.

Thank you and God bless you,
A Free Burma Ranger