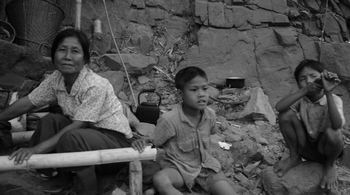 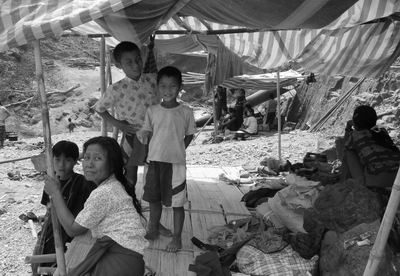 IDPs from Toungoo District in their temporary shelters. 27 March 2006. 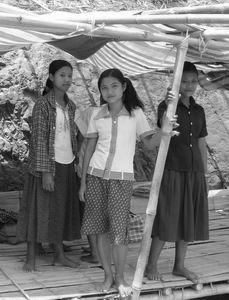 There are now over 380 newly arrived Karen displaced people in makeshift shelters on the Salween River.

303 people (adding to the over 80 that have been here since last week), came down just yesterday (26 March) after a long and risk filled march from Toungoo District, Northern Karen State. One baby was born last night, 26 March 2006, as the IDPs made their way from Toungoo District to the Salween River.

These people are part of a group of over 600 Karen who fled Burma Army attacks on their homes in February. They had to survive being chased by the Burma Army, then were blocked by other Burma Army units on their route just as they arrived close to the Salween River.

They then had to go back up to the mountains and with the help of the Karen resistance cross a road controlled, mined and patrolled by the Burma Army. Some people are still trapped on the north side of this road but these 303 were able to escape across it.

The Shock of Seeing Families and Friends in the Sun:

When we first walked up to a group of 83 who had arrived earlier, we all felt a little shocked to see them sweltering in the sun. The Salween River here only runs at about 400 ft above sea level and this time of year it is extremely hot. These were people who we knew from earlier missions and some are friends. They are all from high mountain villages where it is cool year around. To see them huddled under plastic sheets in the blazing sun, far from their villages and farms made us sad and angry.

One woman recognized us from a relief mission last year where we visited her village, and she said,”Younger brother”, welcome and come here”. She beckoned me to her shelter made of a bamboo frame with blue plastic sheeting thrown on top. Her young son on the bamboo floor and looked closely at us. She picked up her shoulder bag and said, “I have a book here in which I have written everything that has happened to us since the Burma Army attacked. I have kept the details everyday. I also took photos and gave the team that helped us to get here the film. ” Then she smiled and said, “Welcome and it is good to see you”.

By now most of the people of this group were coming close to us and were smiling. “We are so glad to see you”, they said, and “We are sorry we do not have much.”

Their positive attitude was inspiring and lifted us up. We talked with the people and soon some of us were playing with the kids. “What else could we do”?, I asked myself. What we are able to do seems so small compared to what the people need.

More than anything, they want to go home and live in freedom and safety. We asked ourselves, “How could we help them do that?” We want to help them go home, but with the resources we have and in the face of the power of the Burma Army how is it possible? We do not know, but we not give up trying, just as the people here have not given up. We are together in this even if we can not change the situation much.

With the help of many groups like Partners, we are bringing what relief supplies we can, focusing on medical care. Groups like the Committee For Internally Displaced Karen People (CIDKP), and the Karen Office for Relief and Development (KORD), are supplying basic food and shelter, while other groups like Karen Human Rights Group (KHRG) and Back Pack Medical teams have people who focus on human rights reporting and health respectively.

Here are many different groups and individuals trying to help, but we are all small and the need is greater than what we together can meet. We are grateful to be able to work together and grateful to the Karen resistance (KNU) that is helping to find a safe temporary place for these people.

In addition to the people described above, who have already fled to the Salween River, there are now over 5,000 people displaced in Toungoo and Nyaunglebin Districts due to ongoing attacks by Burma Army troops of the 66th and 99th Divisions.

These attacks have intensified and now there are over 2,000 people in hiding in Toungoo District alone. These are mostly from 16 villages in the Southern part of Toungoo District, (Tantabin Township, mostly west of the Kler La/Baw Ga Lee Gyi to Busakee Road). In Nyaunglebin District there are over 3,000 people now in hiding; in Mon, Kyauk Kyi and Shwey Gyn Townships. The Burma Army is attacking in 1-4 battalion sized force and chasing people into the jungle. Homes are then looted, sometimes burned and then landmines are left behind to terrorize the population. Their purpose is to cut off the people from their lively hood, cut all support for the pro-democracy Karen resistance, and gain control over the population.

The Burma Army wants the people to be completely under their domination and acquiesce to their demands or move to relocation sites. When people refuse to leave their land, they are attacked. The use of landmines has also increased as the Burma Army try’s to block all trade and travel from the mountains (where most the Karen they cannot control live), to the plains. It is the feeling of the Karen leaders here, that as the hot season progresses the attacks will increase.

The greatest need the people here have now is security, food, medicine and support to continue their children’s education-even when they are on the run. Thank you for your help and care.