Report Summary:
An FBR trained relief team conducted relief operations and research from January 16th 2006 within Gaw Ngaw Law Bae – an area of Karen State currently controlled by the Democratic Karen Buddhist Army (DKBA). The experience of displacement and exploitation of Karen villagers by DKBA soldiers are comparable to that exercised by SPDC troops. The team visited internally displaced persons (IDPs) and they treated patients, spoke with them and prayed for them.
. 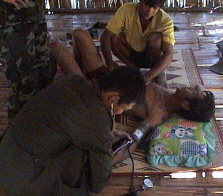 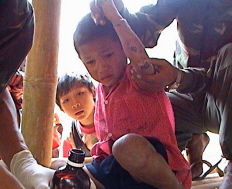 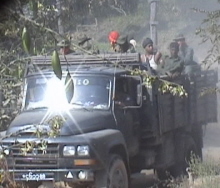 SPDC troop movement to the border

The team reported that the IDPs in this area have many health problems due to their poor conditions, but there are very few medics and not enough medicine.

At two schools that the team visited, SPDC soldiers stay at the school building, making it very difficult for the students and teachers to concentrate. The school has no opportunity to make improvements. This time, were not able to give any special gifts for the children. However, they were able to give out Bibles and hymnals.

The team leader concluded, The SPDC is making the living standard of the villagers decrease, and will continue to make things more difficult for them.