The purpose of this update is to relay information and interviews describing the situation facing the people in Shan State and some of the related educational and health needs.

During an interview with Waling, the village headman for a Shan internally displaced community, he confirmed that the situation for IDPs is grave. Waling had been forced to flee his village, Le Cha, in Southern Shan State in 1996. 70 families had to run into the jungle as the military attacked. His own parents were burnt alive in their home before they had a chance to escape. Only four other families made it to a hiding place and he has never heard the whereabouts of the families who did not make it.

He said the situation is worse now than before because villagers fear both the Wa and Burma Army troops. He said the Burma Army soldiers take everything and are not interested in peace.

According to Col Yawd Suk, leader of the Shan State Army (SSA), the situation facing civilians in Shan State is deepening in terms of the severity and numbers of people being affected by the Burma Army operations.

He said, ‘The abuse is only increasing and worsening every day on all accounts. People in Central Shan State are experiencing the severest human rights abuses including forced relocation, shooting of villagers at random and confiscation of properties.’ 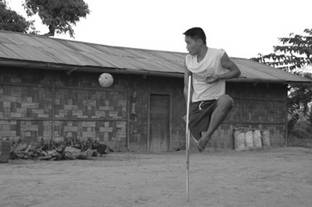 Shan amputees are common due to use of landmines

He continued ‘The SSA has conducted a survey which has not been completed about the numbers of IDPs in Shan State. The census to date has counted over 20,000 IDPs hiding and living in the jungles.’

Further unpublished research by the Restoration Council for Shan State (RCSS) in the areas where SSA troops are active, revealed continued violations of human rights. Their report which has not yet been translated into English cites that between 2002 and 2005, the following abuses occurred;

The report also cites several massacres which have occurred in Shan State, including; ” On 6th October 1996, 18 villagers were arrested and tortured. On Oct 18th, all of them were executed.”, ” In March 1998 in Sai Cow, Shan State, 53 men women and children were massacred by SPDC troops.” and “In 1998, a total of 992 civilians were executed by the Burma Army.”

The following information was given by the SSA.

A Shan soldier, Sai Kiaw aged 23, is still in hospital at a Shan base after a shell exploded near him on April 26th 2005. 5 other soldiers were also sent to a hospital after they also started vomiting blood and becoming anorexic after breathing smoke and dust from an exploded mortar.

Sai Kiaw was in a bunker on the frontline at Gong Ka outpost when the Wa Army started shelling. During the height of the battle along the entire front, more than 2,000 mortar rounds were fired in one day. One mortar fell meters from him. Although he was not hit by any shrapnel, dense smoke and dust surrounded him. He wiped the dust off and ran from the bunker. The battle continued and he showed no sign of injury except that the smoke and dust had choked him.

According to the SSA, after 10 days, small watery blisters started to appear on his arms and legs, became boils and spread all over his body. The boils have reduced but not healed even 7 months after the attack.

There are 229 orphans who are being cared for at an SSA base. These children make up 30% of all the children who attend the local school. It is not that these children have been separated from their parents; it is that both their parents have been killed, either directly or indirectly as a result of Burma Army offensives.

Hseng Hom is one of these children. Having been raised in Oo Yin Village in the Southern part of Shan State, she lost both of her parents during SPDC attacks. Her elderly father had been forced to carry heavy loads through the jungle but was shot because he could not walk. When she was 10, she was raped by a SPDC soldier. With no-one to protect her, she fled her village and was picked up by officer Khu Leng Parng of Shan State Army and brought to the base around one year ago. At least now she is in a community where she is safe. Her ambition is to be a reporter – so that in the future she can tell the truth about her people’s experiences. 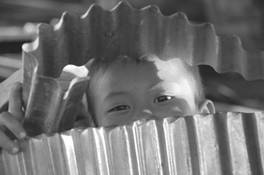 One of Shan States vulnerable children

There has been a cessation of violence ever since Shan troops resisted a Wa attack on their compound in April 2005. As a result of the battle there were reportedly 500 fatalities, mostly sustained by the Wa troops.

Col Yawd Suk gave the following explanation for the Wa attack, ‘The reasons were two-fold. Firstly, they were forced by the Burma Army troops and secondly it was because the SSA was obstructing drug passage through Shan State.’

Tensions remain high and no formal ceasefire or agreement has been signed between the two groups.

Khur San, the RCSS’s Head of Education and Posa Weh, who is in charge of a clinic on an SSA base both confirmed an urgent lack of resources to meet the educational and medical needs. 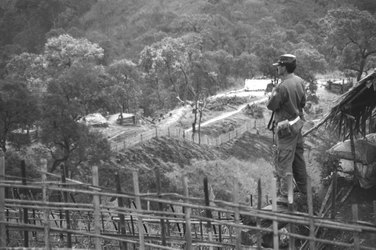 Shan soldier looks down on Wa positions below

Facilities in the clinic are barely sufficient and lack even the most rudimentary equipment. However, it is the only option for Shan IDPs unless they are reached by the 5 mobile medical teams who travel in the jungle. These teams reach an estimated 10,000 patients each year.

Teachers are also desperately needed to provide education for the emerging generation. The literacy rate is estimated at 11%. Currently only 5% of Shan reach tertiary education. Under British rule, education in Shan State was higher than in the lowlands but now is very poor, even compared to other ethnic states.

According to the RCSS, It is illegal for the Shan language to be taught in government schools. In the villages, schools have been consistently closed down over the last forty years under the pretext that they are fermenting insurgency against the regime. It is often not even possible for the villagers to send their children to Burman schools as they cannot afford the fees.

In government schools, ethnic history has been revised and diluted. The Shan civil servants, teachers and policemen that have training are often sent out of Shan State to prevent any resistance. This is creating a vacuum of trained professionals who can pass their skills on to the children.