Burma Army burns a village, and displaces over 1,200 people in attacks against villages and IDP hide sites in Southern Karenni State. Update Jan. 2, 2006

On Dec. 23, 2005, troops from Burma Army battalions 421, 426, 428, and 424 continued their attacks against Karenni villagers in Southern Karenni State. Burma Army soldiers from battalions 426 and 428 burned down 26 houses Gee Gaw Ber village, forcing all 610 residents of the village into hiding. In this area there are also 341 villagers from the nearby village of Toe Ka Htoo who fled in fear of further Burma Army attacks. 255 people from Pah Poe (Papo) village, which was attacked on Dec. 17 are also in hiding. The total number of new Internally Displaced People (IDPs) in the area is 1,206. The 1,206 now in hiding are with out shelter and the temperatures in this area are very low. The people are hiding at elevations between 3,500-6,500 feet and the freezing level is at 4,000-5,00 feet.

Context: The people of this area of Southern Karenni State have been under constant attack since December 2002 when over 2,000 Karenni and 3,000 Karen were attacked by 10 battalions of the Burma Army. (The Karen were from villages near the Karenni border who were also attacked by the Burma Army). 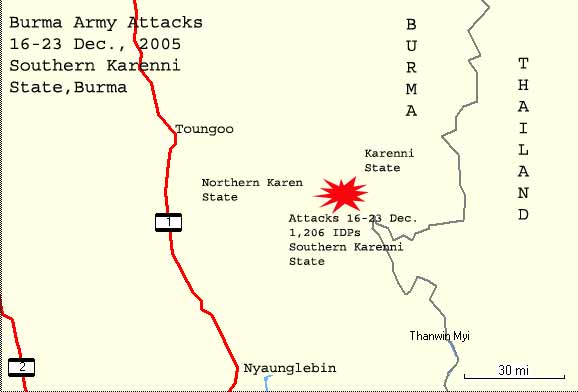 From 26-30 November they attacked and burned down the Karen village of Hee Daw Kaw and conducted a sweep against other villages resulting in over 2,000 IDPs. (1,700 of these Karen people have since been able to return home but the 300 people of Hee Daw Kaw village are without homes and still in hiding.