A Physician's Perspective of an FBR Training Camp

This reflection was written by an FBR physician assisting and observing a Free Burma Ranger training camp. 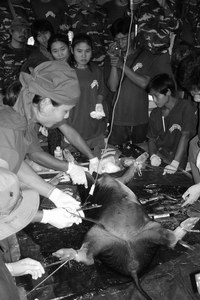 For the last month, I have been living on the fringes of two foreign worlds. One world, although quite different than my own, is at least within the grasp of my understanding … a training camp in the jungles of Burma. The other world, dark and dangerous, is completely beyond anything I have ever experienced. In fact, I can only catch shadowy glimpses of it here. It is a world where both evil and self-giving good abound in uncommon extremes. And I struggle to fuse the images of these two worlds. The purpose of the training camp is to teach teams of four or five people to actively counter the Burma Army … with practical love. Where the army uses hate, forced labor, torture and rape, these teams bring medical treatment, food, blankets and hope. Most importantly, hope. Teams consist of at least a videographer, a human rights reporter, an armed security person and a medic. One of these will be designated as the leader. One, often a pastor, serves as a counselor. After their training, the teams will use their skills to bring aid to the ethnic minorities being targeted and attacked by the Burma Army. If nothing else, they are to stand with people and bear witness to their suffering. The setting of this training camp is different enough from the hospital environment I am used to but still within my concept of reality. Mostly healthy young men and women run laps, do pushups and pull-ups. Students learn how to rappel, swim and navigate by map and compass. We are surrounded by green jungle, live in bamboo huts and bath in the river. It reminds me of a serious Boy Scout camp. But, occasionally there comes just a whisper of the other, more sinister world. Students also have to learn how to remove landmines. I help teach how to stabilize and treat war injuries …. burns, shock, chest trauma. The chilling touch fades, and I am back to the camp world again. Young people are goofing around, trying to cheat on calisthenics or get out of a class. They play a joke on a teammate. Evil feels distant. Students seem less the heroic knights of good and more like a bunch of kids in a youth group.

However, just when I start to understand the students in the framework of my own past, the worlds shift again. I hear some of their stories. One young man in his twenties has been forcibly displaced from his home over 20 times. Another young man tells of seeing the Burma Army cut off the limbs of his grandfather, put his torso in a bag and throw him into the river. One older student, more quiet than the rest, describes being tied up and beaten for three days. When the army men started beating him with a gun barrel, he says he nearly lost his mind. What he describes isn’t a scene from a movie where the hero grits his teeth, kills his captors and escapes. This man fully believed he was going to die. After he was released, he couldn’t see, vomited and coughed up blood, lay in bed and took three months to recover. Nor did he seek to exact his revenge afterwards. During the beatings, he had promised God he would become a pastor. Four years later he went to Bible school and fulfilled that promise. He now returns as a Free Burma Ranger with a servant’s heart to care for others who are suffering similar ordeals. More than most people, this middle-aged man understands the risks he takes to bring care to his people.

Nevertheless, he carries on with a quiet, humble and very courageous strength. This pastor captures the essence of what the Free Burma Rangers are trying to do here … to light fires of hope and love in a land that has been darkened with cruelty. They do this by giving ordinary people the tools to bring practical help to victims … Medicine, a prayer, a look of kindness in the middle of a terrifying night. It is overtly and unashamedly Christ like. To give everything of yourself, your body, your strength, your skill and even if you have nothing else to give, your presence. The one unpardonable sin here (for the ordinary person) seems to be to abandon someone who is suffering, even if only to save your own skin.

To be honest, I struggle to relate to the stories and images of this world. As a physician I have seen many patients who have suffered real pain and loss. But my experience of a world where officials of the ruling government inflict that pain on its people as a rule is really limited to the movies. In contrast to the camp world, this one feels surrealistic, one step removed from my innate sense of reality. Nevertheless, I feel it has been important for me to try to understand it. Besides knowing how to better pray for the situation and what skills I might offer as a doctor, a sympathetic understanding affects some of the fundamental ideas of my own faith. Courage and self-sacrifice in proactive acts of love are good and inspiring as they are profoundly Christ-like. Coming from a culture that seems to define goodness by the route of least suffering and the most self-fulfilling, some of these ideals are hidden, muted, foreign to me. On another level, I find that many of these images and stories of self-sacrifice and courage, powerfully, almost viscerally, remind me of Jesus and his response to evil. So, as much as these people need our help, I believe that they also have much to give us. Imagine if we all loved so practically and courageously and selflessly and took it straight to the heart of the worst evil in our lives. Even if the situation didn’t change, we would …and therein lies all the difference. May God’s will be done on earth as it is in heaven.