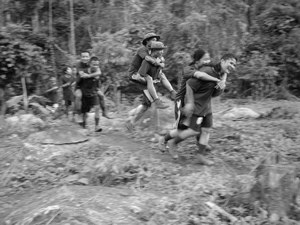 It was Christmas time. Everyone was supposed to be happy. I had gone to our village, Talayko, which is a three hour walk, for some Christmas shopping. My younger brother came with me as far as the village but returned home that evening. While I was there, some Burma Army soldiers arrived. When they saw me, they asked a villager, “Is she the one … the daughter of the one we killed?” The people lied to them, no she’s not. So they kept going.

I didn’t know what they were talking about. The following day as I was going to the shopping area, a farmer came by and asked me, Are you from the family that was killed?. I asked him, How many did they kill? He said, ‘Two women died and one old man and a boy. And they captured one man and a woman.’ I said, ‘I don’t know … in my family we only have two women … My mom and my older sister.’ I still wasn’t worried. Meanwhile, my brother had returned home, saw what had happened and went to my aunt and uncles house. They then came to the village to get me. On the way back, I asked everyone I met about what happened, but no one knew any details because their huts were not close to ours.

The following is what she now knows happened to her family.

At that time, KNLA soldiers would come back for Christmas. One medic was on his way home and stayed in our hut. A village woman who had gone to the medic for treatment was with him. They were supposed to have left in the morning. What we didn’t know was that the Burma Army soldiers were patrolling in the area. They heard children crying and in the moonlight found our hut. At that time my older sister had gone to take a bath wearing only a sarong. The soldiers stopped her. They asked a question, but my older sister doesn’t understand Burmese. She answered “I don’t understand Burmese’. As she tried to run away, a Burma Army soldier grabbed her long hair and hit her head once. Then they encircled our hut which is in an open area. They started to shoot at everybody from the bushes. Because they shot at our hut, my mom and my dad and my 3 year old brother were all wounded. My youngest brother was still breast feeding. My 8 year old brother escaped. The soldiers had already captured my older sister and my 14 year old brother who had been outside. The medic who was staying in our hut escaped. But he returned for a backpack that he forgot and was shot and killed. They raped, tortured and killed the woman villager just outside our hut. They did not torture my mom and dad because my mom was wounded and unconscious. She revived and breast fed my youngest brother. Later that same night, there was no one to take care of my mom and she died. My dad died just outside the hut. My brother (who had escaped) came back … nothing happened to him. Since the Burma Army soldiers took my older sister and brother, we have never seen them again.

The Burma Army eventually “adopted” the rest of her brothers. Hsa Kae heard rumors that they were coming back to take her as well. A pastor’s wife hid her until she could move into the household of a Karen Army Officer, where she stayed for a year. The following December she went back to visit her village and held a memorial service for her parents. In and out of refugee camps, one day she met a woman medic and a woman pastor who were going out to work with the resistance. Hsa Kae decided to join them and eventually went on to become a medic herself. Last year, she completed Free Burma Ranger training, joined a FBR team and participated on two relief missions. She came back this year for a second Free Burma Ranger training in order to learn more. When asked why she became a medic, she replied, “I think about my life … about my mom and dad before they died … we didn’t have any medic to treat them. And so I wanted to know about medicine and how to help my people in the future. Also if I see my brothers and sister again, I could help.”

For me I don’t need anything. I only want to see my brothers and sister. If we see each other, we will walk on our own corner, [we will each do our own work] for our people. And we will concentrate on our duty. And we will know that, though our enemies treat us very badly, that we [have stood] against them courageously. We will try our best, that there will be no more hardship for our people in our future. We want freedom.