Message from a Relief Team Leader and Toungoo Update

I am writing this as the Burma Army continues its attacks against civilians in Toungoo District, Northern Karen State. Now there are over 1900 villagers hiding in fear from the Burma Army. They are in mountains where the elevations range from 4,000-8,000 feet. It is now cold and with no shelter and only the clothes they could escape with, it is a difficult and dangerous task to hide and survive. We and others are organizing a relief effort for these people and will send a team to support those who are already there trying to help. Last night as I lay with my daughters who both had high fevers, I thought about the families in hiding among whom there must also be some sick children. An anger rose up in me as I thought how terrible it was that people could chase families and children from their homes. It was bad enough to be taking care of our two sick little girls in this training site, but the thought of having to run, hear their cries, try to keep them warm and tend to their fevers as we carried them made me very angry. I thought, “If any normal person in world knew about this they would not tolerate it.”

Earlier this year we conducted relief missions in this same area to help over 2,000 people who had been displaced by Burma Army attacks. I remember then, looking at Hee Daw Kaw village in the distance with its prominent tin roofed church in the middle, thinking, “What a beautiful village, one day I would like to visit it”. I was told, “That village is safe, we don’t think the Burma Army will attack it.” It was one of the few relatively untouched villages and was in a beautiful position, on a knoll at the end of a ridge, high above the other villages. It was, however, vulnerable to attack from the Burma Army camps along the Toungoo- Mawchi road to the north. Now the attack has come. In August of this year the Burma Army began an operation to block all food supplies from reaching IDP areas and villages in the areas east of Toungoo (Hee Daw Kaw is in the extreme eastern part of Toungoo District). There was no warning to this attack and we do not know if this is a beginning of a larger scale campaign against IDPs and villagers in this area. What we do know is that there are now more than 900 people newly displaced with nowhere to go, no shelter and limited food. They are in danger of further attack by Burma Army patrols. Among those 900 are many children who do not know why this is happening, only that they are being hunted. I think of the children who are sick and how miserable they must be and the torment their parents are in.

We will stand with these people.

“Do not be overcome with evil, but overcome evil with good”.

Thank you for your care, help and prayer.
God bless you,
A Free Burma Ranger

There are now over 1,000 newly displaced people in addition to the 900 villagers who fled the attacks of Burma Army IB 73 (Columns 1 and 2), for a total of between 1,900-2,000 IDPs. The Burma Army attacked Hee Daw Kaw Village, burned 30 houses and captured one villager named Sho Sar. In addition to the 900 villagers who are in hiding from this attack, there are over 1,000 newly displaced. these 1,000+ people fled from thier villages and IDP hide sites further west of Hee Daw Kaw after they learned of the initial attack. 300 of the first 900 villagers are from Hee Daw Kaw, the other 600 are from the surrounding villages of Hoki, Sho Ser, Wah Soe, and Ha To Per. The new IDPs (1,000+) are from villages and IDP sites further west up to the Saw Wah Der village area, near the junction of the Mawchi-Baw Ga LI Gyi-Busakee roads, 35 kilometers west of Toungoo. The Burma Army commenced the attack on 26 November. The villagers of Hee Daw Kaw fled at 9 a.m. on the same day, November 26, 2005. The Burma Army then burned down homes in Hee Daw Kaw (exact number not sure due to Burma Army patrols still near the village), on 28th November. The Burma Army also used a small force of the Karenni breakaway faction Karenni National Solidarity Army (KNSA), in this attack. This pro-dictator Karenni group (KNSA), numbers 200-300 men and were formed in 2002 with the support of the Burma Army. They have been used by the Burma Army to attack the Pro-democracy Karenni resistance (KNPP), as well as IDPs in Karenni State to the east. This is the first major attack in Toungoo District of the Karen State in which the Burma Army has used the KNSA Karenni force. 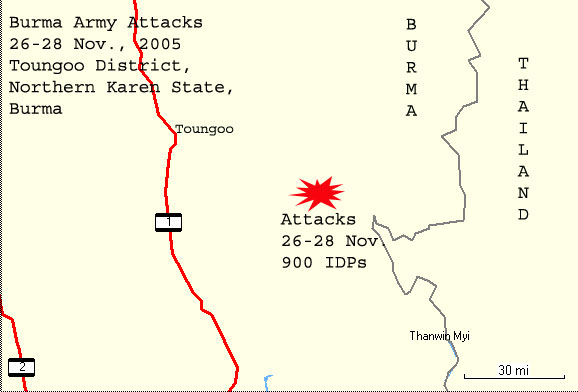