***The three pictures attached show the massacre victims at Htee Law Bleh and are graphic.

They are examples of the brutality happening in Dooplaya District, Karen State, Burma.

Civilians massacred, villages burned, churches destroyed, Christian pastors and a Buddhist Monk tortured, forced relocation, and over 5,000 IDPs, 1,000 of whom are in hiding and fleeing for their lives. This is the current situation in central Dooplaya, Karen State, Burma. Dooplaya district is that part of Karen State, Burma, bordering Tak and Kanchanaburi province, Thailand, to the east, and located to the west and southwest of Myawaddy, and North and Northwest of Three Pagoda Pass to Thanbyuzayat and Ye. Central Dooplaya is the area from the Thai border (between Three Pagoda Pass and Bueng Klung) to Kya Inn Seik Gyi and the Zumi river. This report was completed by a relief team , that went to the IDPs in this area in June 2002. The situation among the IDPs in hiding, those already forcibly relocated, and the few villages left intact is among the worse in Burma. This is a brutal reign of terror.

In central Dooplaya district from April to June, over 5,000 people have been displaced, 6 villages burned, 6 schools destroyed, 5 churches burned, 15 villagers murdered including women and children as young as 2 years old, (12 in one massacre), 3 pastors captured, tortured for 5 days and still held captive-condition unknown, over 28 villages attacked, looted and forced to relocate and over 1,000 people now hiding in the jungle attempting to make it through Burma Army patrols into Thailand.

Over 4,000 more would also attempt to flee but are too far from the border and too close under Burma Army observation to escape.

The relief team treated over 1,300 patients, including one six year old boy shot in the massacre of 12 villagers at Htee Law Bleh , who played dead and managed to escape. The team also distributed relief supplies and helped to escort 96 villagers through Burma Army lines to the Thai border and safety.

The team witnessed first-hand two relocation sites, the 6 burned villages, the graves of 13 of the 15 killed, the shelling of villages as the Burma Army attempted to force all villagers in them to leave, and the chasing of escaping villagers by the Burma Army. The feeling of fear and hopelessness was palpable. The Burma army units conducting these operations all belong to the 88 Division and are ruthless.

“I dont respect any religion, my religion is the trigger of my gun”, were the words of Burma Army Column Commander Khin Mau Kyi, of IB 78 as he and his unit burned villages, churches, tortured pastors and tortured and urinated on the head of a Buddhist monk. LIB 301, LIB 416 also burned villages while IB 77, IB 75, and LIB 317 mortared, machine-gunned and forced villages to relocate.

(See also… ‘Observations’ at the end of this report)

The following villages have already been forcibly relocated;

The following were given orders to relocate on 10 June, followed by machinegun and mortar attacks from 12-17 June: Mae Tha Krae, Paw Nae Moo- East , Hti Per Nweh-North, Htee Kway, and Tha Ku Kee.

Note: The Burma Army in this area are now giving orders for village headmen to come to their camps to receive relocation orders in person, this is also true for orders for forced labor and porters. This is done so that their written orders are not collected as evidence of human rights violations.

15 civilians have been murdered in this area from April to June, more than 16 wounded and 11 tortured by the Burma Army.

9 others were shot but escaped, including a boy, age 6 who was shot with the 12 massacred and played dead.

1 villager, Saw Thaw They Htoo was killed and his body hidden ( later discovered by villagers and the team), on 27 April by LIB 416, Commanded by They Shwee, and in May (exact date unkown), 2 villagers from Thaw Bau were shot to death by IB 78. Over 5 villagers were wounded.

On 8 May a villager from Htee Pa Nweh was shot multiple times but survived.

On 10 June one villager was shot and wounded at Tha Mau they by soldiers of IB 78.

From 12-17 June 5 villages were mortared and machine gunned by IB 78 and LIB 301, unknown number of dead or wounded.

Pastors Happy Htoo, See Pa Thru, and Pareh were tortured for 5 days outside their churches, then their churches were burned and they the village headmen and 7 other men were tortured again and taken into captivity and their condition is now unknown. The Burma Army officers responsible for the torturing of the pastors are; Zaw Win Tut, Khine Mau Kyi, Myo Tun Lyn, Than Oo and Thama Shi Shi of IB 78 and LIB 301.

Than O0 also abused a Buddhist monk, U Pa Noo Sa, age 36 at Kaw Kae, arresting him and sending him to a prison in Kayin Seik Gyi. There, he and 4 other monks were held for four days, including one day of torture. At this time guards urinated on the monk U Pa Noo Sas head as well as depriving him of food for one day.

Forced labor and the use of porters has increased in this area with every village (relocated or not), having to provide monthly free labor for road construction, army camp construction, porters for ammunition and food and any other labor the Burma Army desires. At the army camps along the Zumi river, (vicinity Paya Ngok To), women are forced to carry ammunition and rice re-supply for the soldiers. They must answer the summons immediately and bring their own food.

On the road to Kya Inn Seik Gyi villagers are forced to purchase 4 trees each and then plant them along the road. Forced labor is being used on the following roads; Kya Inn Seik Gyi- Koh Kwa, Kyaik Don to Winlone, Kya Inn Seik Gyi to Tagay and Bisakat and the road running along the Hanthayaw river vicinity Kyaik Don. All these roads are dry season roads, however with 4 wheel drive and a winch or other help, they are driveable all year. As this area has few high mountains and many roads that were well constructed by the KNU (Karen National Union) in the past, the road system is among the best in the Karen State. It is the aim of the Burma Army to keep these roads open and add to them by forcing villagers to work on them all year.

While engaged at whatever work they are forced to do, the villagers are beaten, robbed and humiliated, their lives completely at the mercy of the Burma Army.

34 villages (28 then relocated, and 6 burned), in this area have been looted by the Burma Army with hundreds of oxen and water buffaloes lost. Chickens, pigs, rice stocks, clothes and any thing of value in homes have been stolen by the Burma Army leaving most people here destitute.

The situation in central Dooplaya is grave and without intervention will only get worse. The sight of babies crying and children in rags fleeing the attacks of the Burma Army is horrible and wrong. Families with all their belongings on their backs have to struggle through dense jungle as they cannot use proper trails because of Burma army ambushes. They are hunted, shelled and driven like animals.

Some have to turn back before reaching Thailand because there are too many soldiers blocking their way. The resistance (KNU), manages to get a few families through but they are vastly outnumbered and outgunned by the Burma Army.

Life at the relocation sights is brutal and there is not enough food and no medical care.

“It is too dangerous to stay and too dangerous to leave, what should we do? “, said one man from a relocation site. “We are human they are human, why do they kill us like animalsthe Burma soldier looks like a man but his mind is not like a man, they are like lionswe are going crazy, they are making us crazy, what can we do, who will help us,I told my people we must move but what about the new born, what about the sick?we feel crazy we dont know what to do”.

A teacher told the team, “I love education and to teach but every time our schools are burned, how can I teach, what will become of the children, we have no hope, they have no futurewe live in fearwe heard that Aung San Suu Kyi was released and we hoped it would get better, but no, things are even worsewe are forgotten.please pray for us, please help uswe will not give up, we are people, we still believe God will prepare for us”.

This area is one of the most fertile in the Karen state and relatively flat and wet, with thousands of acres of rice fields and fruit plantations. Since the relocations and attacks at least one third of the fields and orchards have been abandoned and are now covered with weeds and thorns. Teak wood schools and churches now lie charred and villages lay in waste.

Unless they are intercepted by the Burma Army at least 1,000 more IDPs will come into Thailand (Nopo camp area) as refugees this rainy season. And by all indications more will come as the forced relocations intensify.

A relief team can give some help, they can treat some wounds, they can pray and show love, they can be another voice, but it will take much more to bring justice and peace to the people of Dooplaya and Burma.

It is the moral duty of the international community to take action to save these people. The government of Burma will not, for it is their mission to destroy them. As one IDP asked, “The SPDC tortures, kills, burns and steals, what kind of government is this?” 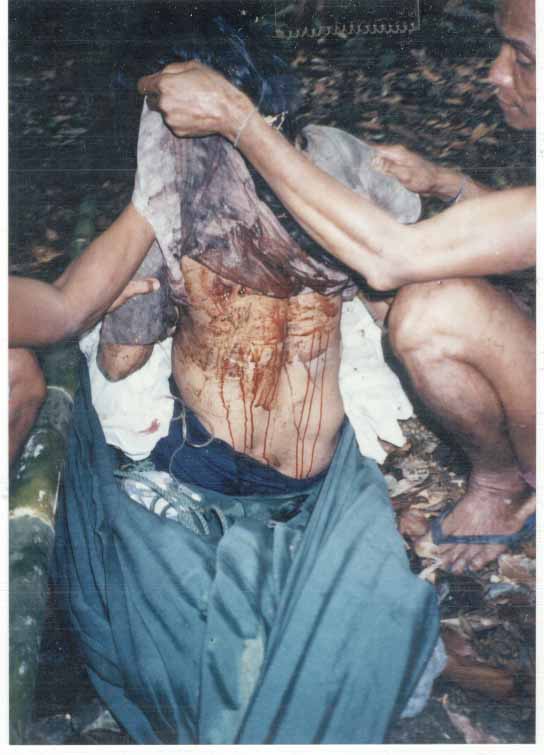 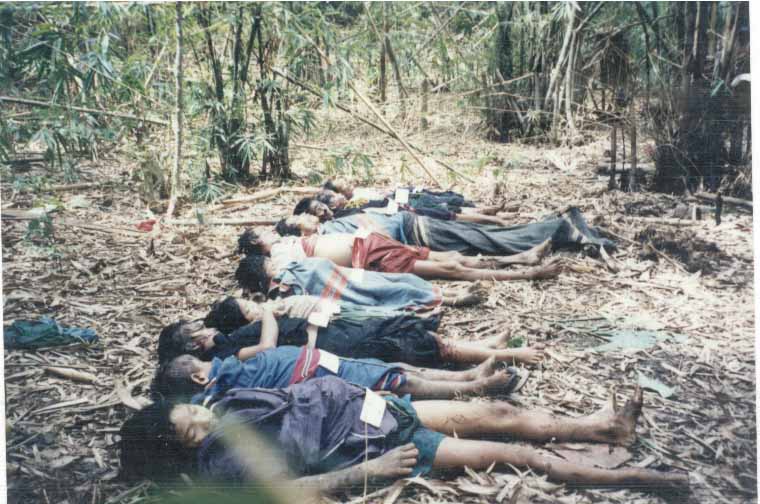