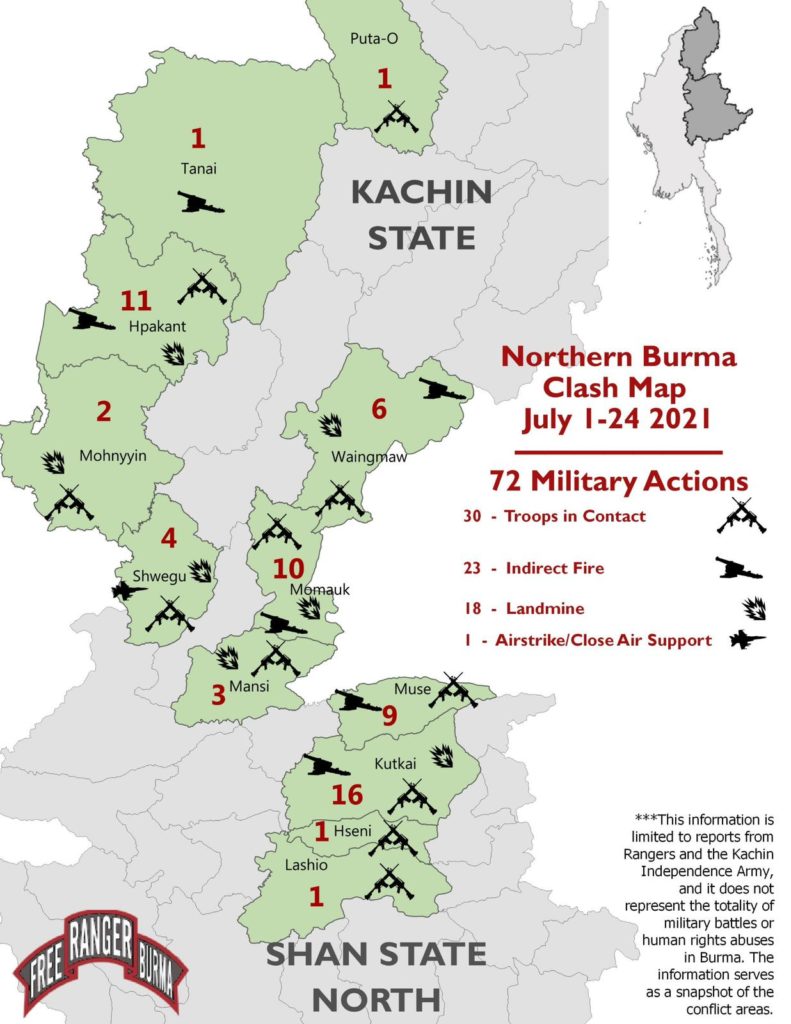 Information in the above map is for the month of July only.

July 1 at 1045 hrs., ten 81mm mortar rounds fired from Nam Ya Light Infantry Battalion (LIB) (12) Base to the sides of Hkrai Run, Gawlu Yang gold mining area, in Hpakant Township. At 1625 hrs., Burma army soldiers from Kamaing Byuha Base (Tactical Base) indiscriminately fired a mortar round toward Dam.

July 2 at 2:50 p.m., Nam Ya LIB (12) fired mortar rounds indiscriminately and one of the grenades landed on a compound in the home of Deacon Hpukawn Ze Naw, Kumtsai Zup village. For that, the soldiers of the Burmese army from the Nam Ya base sent 100,000 kyats to the family in whose yard a shell was landed – through Mr. Gum Maw Awng and his friends, but the family did not accept the money and told them instead not to fire mortars into the village next time, in Hpakant Township.

July 7 at 0650 hrs., the combined troops numbering around 50 soldiers from LIB (116) and Infantry Battalion (IB) (42) coming from Kasen Bum were attacked with mines along Namkawn Rung, Seng Awng village by Kachin Independence Army (KIA) soldiers from 6th Battalion, leaving many Burma Amry soldiers killed or injured. The injured were sent to Hpakant hospital.

July 15 between 0535-0542 hrs., the clash erupted again when KIA soldiers carried out a clearance operation at the site. Nam Ya LIB (12) backed by 60mm mortar fire during the fighting that a shell landed in the house of Zahkung Zau Seng, injuring five civilians: Maji La Ja, Ms. Hpauyu Hkawn Nu, Hpaula Dut La (in serious condition), Hpaula Kai and Ms. Marip Myu Htoi Tsin, and another shell landed in the house of Mr. Lamwi Naw Jat, at Seng Hpra village, killing one pig.

July 23, around 80 Burma Army soldiers from LIB (309) operating on foot from Katha were attacked with a mine by KIA soldiers and PDF, leaving five Burma Army dead and five wounded, in Monyin Township.

July 2 at 0935 hrs., KIA soldiers from 19th Battalion attacked around 100 Burma Army soldiers operating at Mansai road junction with a mine between Loi Mawk and Dung Hung, injuring 4 or 5 soldiers. Burma Army soldiers reacted by firing in the vicinity, which lasted 10 minutes, resulting in five civilians (including a 2-year-old child) wounded, in Momauk Township. A 2-year-old child was sent to Myitkyina hospital due to a serious condition, while the four were sent to Dawhpum Yang hospital.

July 12 at 0850 hrs., KIA’s militiamen attacked with two mines at a 4×4 truck carrying 8 Armed Policemen from No.30 Police Station en route to Yuma village from Hpakant, leaving two policemen wounded. The incident took place in front of Yuma School. Another 4×4 car carrying 6 policemen, going to check the incident, were detonated a mine at 1315 hrs. too.

July 23 between 1852-2025 hrs., Burma Army soldiers stationed at Hpunpyen Bum stepped on a landmine on the way to fetch water. In retaliation, they fired 6 mortar rounds from Hkangkai Bum toward Shang Htung Bum, 3 rounds from Bumre toward a KIA post under GHQ command, in Momauk Township.

July 21 at 0845 hrs., three KIA soldiers laid a mine inside the checkpoint, Hka Ya road junction wherein Burma Army soldiers from IB (77), under LID (88) sat during the day and withdrew at night. A mine was detonated when the soldiers sat, leaving two dead and three others wounded, in Waimaw Township.

July 4 between 2300-2310 hrs., the clash broke out when the combined forces from 12th Battalion and PDF attacked around 30 Burma Army soldiers under LID (88) taking security for underground communication cable at head of Ngabat Gyi village and around 30 policemen stationed Shwegu Quarter (3) Police Station, in Shwegu Township.

July 7 between 0700-0730 hrs., the fighting broke out when KIA soldiers from 5th Battalion fired at three boats carrying around 60 Burma Army soldiers at Gaugwi Hka and Nambu Hka river intersection, in Shwegu Township.

July 13, around 50 Burma Army soldiers under LID (88) appearing at Ta Ya Kung, Chyauk Ji from Uk Tsi village were attacked with a remote mine, killing one Burma Army soldier and injuring 6 others, in Shwegu Township.

July 4 at 1720 hrs., the fighting broke out when around 100 Myanmar National Democratic Alliance Army (MNDAA) soldiers from No.311 Brigade fired at around 30 Burma Army soldiers from LIB (547) in a truck heading to Loi Ngu from Hpawng Seng – near Loi Ngu village (MG 459 644), in Muse Township.

July 5 between 1240-1320 hrs., Burma Army Base at Hpawng Seng fired four 81mm rounds to the side of Loi Ngu Bum where MNDAA soldiers stationed, in Muse Township.

July 12 at 1800 hrs., there was fighting between MNDAA soldiers and LIB (575) at Hpawng Seng Lashap village, in Muse Township.

July 13 at 0925 hrs., there was fighting between MNDAA soldiers and Burma Army soldiers of an unknown unit between Man Pying village and Nawn Hpai village, in Muse Township.

July 4 at 0810 hrs., around 50 Burma Army soldiers under LID (99) heading to Man Pyawng Bum from Nam Hpalum were attacked at the coordinates: LG 872 029 between Kawng Lim and Shu Khin Tha by KIA soldiers from 29th Battalion in Kutkai Township.

July 9 at 1013 hrs., an estimated 100 Burma Army soldiers of an unknown unit coming from Nam Ba Chi village were attacked with a mine by KIA soldiers from 39th Battalion, in Kutkai Township.

July 1 at 0830 hrs., KIA soldiers from 8th Battalion detonated a mine at a 4×4 truck in which soldiers from IB (123) were travelling on their way to Namhpakka Quarter (3) Market, leaving two dead, in Kutkai Township.

The month of June saw continued fighting in Shan and Kachin states, with a reported tally of 34 artillery missions, 13 uses of mines and improvised explosive devices, and 27 troop contacts that resulted in short or prolonged fighting between EAO’s and Burma Army forces. In Kachin State much of the reported fighting took place in Hpakant, Mansi, Monyin, Momauk, and Waingmaw Townships, while in Shan State the majority of reported fighting continues to take place in the vicinity of Kuthkai.

On June 23 at 2146 hrs., Burma Army soldiers stationed at Kamaing Byuha Kawng (Kamaing Tactical Base) fired two 81mm mortar rounds to the side of Si-En terrain, in Hpakant Township.