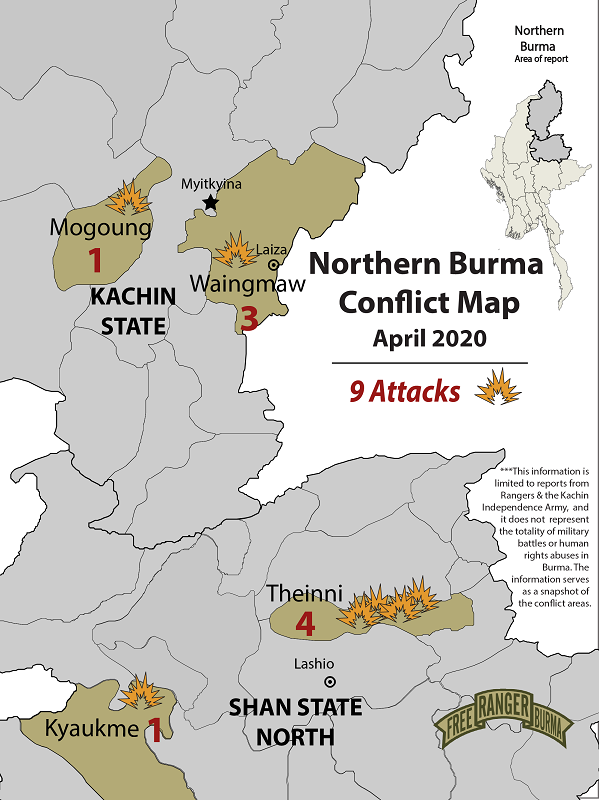 There were no clashes between the Burma Army and Kachin Independence Army (KIA) from January through March 2020 in Kachin State. This April, Burma Army provocations and reconnaissance drones used against the KIA in Waingmaw Township, home to KIA command, are setbacks for trust building. Northern Shan State has remained contentious primarily in Kuthkai and Theinni (Hseni) townships.

On April 28 between 1040-1100, a clash occurred between approximately 60 Burma Army LID 99 soldiers coming from Na Nawng and TNLA soldiers at Nam Uk Village in Theinni Township.

On March 1 at 1516, KIA 4th Company, 2nd Battalion, fought the Burma Army in a field near Lung Woi, Kuthkai Township.

On March 3 between 1000-1030, there was a chance contact (clash) near Bang Hka Village between MNDAA soldiers and approximately 70 Burma Army LIB 326 soldiers coming from Pu Wang, Kuthkai Township.

Two bodies of KIA soldiers, identified as Pvt. Hpaugun Tang Mai and Pvt. Sumlut Hawng Lum, who were attacked and killed by Burma Army LID 99 were recovered on March 3. The KIA solders had traveled to Hang Shan Pa from Hu Bung to carry rice on Feb. 23 when they were attacked. A funeral service for the two slain was held on March 4.

On March 5, a chance clash occurred between 60 Burma Army soldiers from LID 88 coming from Mung Hawm and an estimated 20 TNLA soldiers from No. 818 Battalion near Man Chya Wak Village, Kuthkai Township.

On March 24 at 1300, Burma Army LID 99 disbanded the Kawnghka PTT headquarters in Kuthkai Township and confiscated all arms and mortars from the PTT base office.

On March 25 at 0900, TNLA soldiers from 3rd Brigade command detonated three landmines at an estimated 100 Burma Army soldiers coming from Mung Maw and then fired rifles at them. The clash took place near Pan Dang in Manton Township.

On March 29 at 2000, a clash occurred between 60 Burma Army IB 258 soldiers under LID 101 coming from Maw Noi and TNLA soldiers near Nam Lang in Manton Township.

On March 17, a team led by Northern Command from Myitkyina arrived at Danai Regional Operations Command (ROC) base by helicopter and inspected the soldiers who cleared bushes for a new artillery unit base along Hein Aung Fuel Pump and Mile-4 in Danai Township.

On March 22 at 1145, approximately 11 Burma Army soldiers led by Major San Min Aung from LIB 111 stationed at Le Pyin Gun Powder Centre with a 4×4 car frisked and inquired into all people’s business as they traveled by car or cycle in front of the monastery in Sanghka Village, Hpakant Township.

On March 22, Mr. Nangzing Gam Hpang from Nam Si En and Mr. Lahtaw Gam Hpang from Kamaing Htoi San Tang Village went out to hunt at night by torchlight between Mahkaw Bum and Ja Bum. Burma Army LIB 12 positioned at Mada Bum, Hpakant Township, saw the torch light in the mountain and fired rifles and a 60mm mortar round toward them.

On Feb. 5, a KIA officer wearing civilian dress was departing the 60th Anniversary of the Kachin Revolution in Nawng Jang Village, Kuthkai Township, when he was ordered to stop by Burma Army soldiers.  He did not heed their interception and he was shot in the left shoulder.

On Feb. 06 at 1020, Burma Army soldiers advanced toward Nawng Jang Village, Kuthkai Township, where a 60th Anniversary of the Kachin Revolution ceremony was being held and a clash occurred with KIA  9th Battalion.

On Feb. 12 at 1420, a Burma Army convoy of eight trucks left the 105-Mile area and stopped at Lung Hkang enroute to Mungbaw. A KIA militia detonated two command mines, destroying one truck, at Mahkaw Kawng between Namtau and Kawnghka in Kuthkai Township.

On Feb. 14 at 1715, a Mr. Je Hpwi Ye, age 55, of Nam San Yang Village, was injured when he stepped on a landmine on the way to Nbung Yang, Waingmaw Township. His left leg was wounded, and he was sent to Laiza Local Hospital.