A National Ceasefire Agreement (NCA) awareness program provided by the Karen National Union (KNU) was prohibited by the Burma Army in Kyauk Kyi (Ler Doh) Township, Karen State, on March 11. Bawgata camp commander Major Tha Win Htun and troop commander Wein Ya Htun, both from Infantry Battalion (IB) 124, stopped KNU members from teaching Let Kaut Wa and Ma Au Bin villagers about the NCA. An entourage of police, plainclothes intelligence personnel, four fully equipped soldiers, and the Burma Army commanders stopped the program before it started. The major said the Joint Ceasefire Monitoring Committee (JMC) was responsible for informing civilians and not the KNU. The major also reportedly said that his superiors were informed the meeting would happen and that he was dispatched to stop it.

In our military operation area at Let Kaut Wa Village (KA 693014) the KNU organization set a meeting with the people for sharing NCA without application to the upper department of Burma Army, therefore, I prohibit the sharing workshop.

On Feb. 24 Burma Army Major Sa Wing Htun from IB 124 arrived at Aw Pa Lah Village while the KNU hosted an NCA sharing committee. They arrived with 20 soldiers and told the committee the program was over and that if they wished to do the program, they must coordinate with the JMC.

On Feb. 4 the KNU committee met with people at Theit Yet Chaung Village to inform residents about the NCA and how the villagers can participate. During the program, Burma Army IB 124 commander Lt. Col. Htun Htun Linn arrived and told the committee they were not allowed to conduct the program unless he gave permission. “I strongly stop the program and this kind of task cannot be done among the people,” he said. 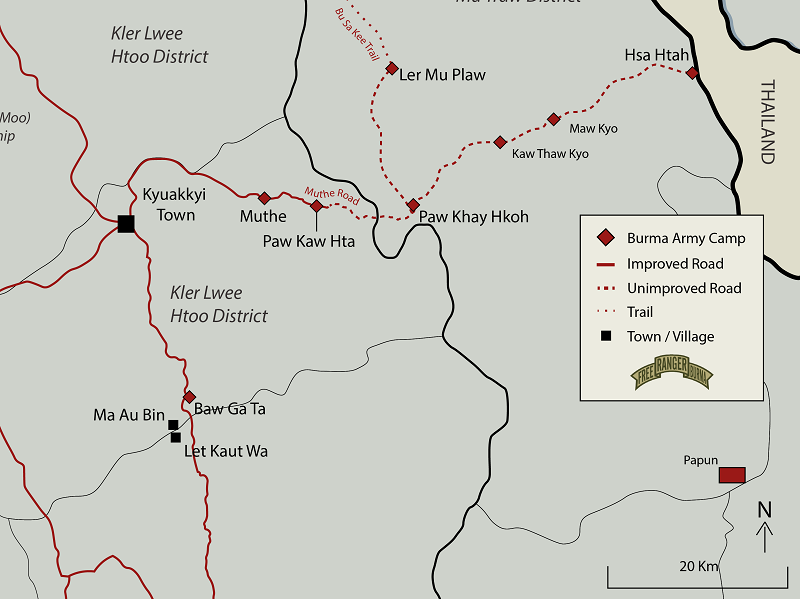 Free Burma Rangers reported on Burma Army troop movements and attacks along Muthe road on March 13. The Karen National Liberation Army (KNLA) fears the Burma Army’s continued reinforcements along Muthe Road and that it could mean the Burma Army will force the road’s construction.

On March 14, five Burma Army trucks with 100 soldiers arrived at Muthe Post. The soldiers patrolled from Muthe to Paw Khay Koh Post after.