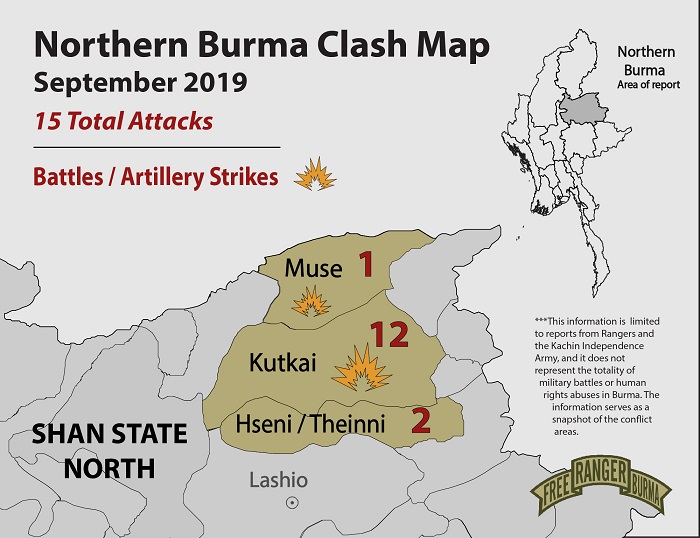 On Sept. 29 at 1230 hrs, four Burmese policemen were arrested by elements of the Ta’ang National Liberation Army (TNLA) 335th Battalion in the vicinity of Namsa Village on charges of extorting money from cattle traders in the area. The policemen were on motorcycles and identified as Second Lieutenant Tin Soe, Sergeant Soe Tet Nai and Corporal Kyaw Min Htaik and another man from Mungji Police Station. A pistol and two hand grenades were recovered from those arrested.

On Sept. 28, a Burma Army element of approximately 80 troops, from Infantry Battalion (IB) 105, confiscated mining equipment that was being operated without permits in the vicinity of Namsi Awng and Nam Hta Kawng. The seizure was reportedly ordered by the Northern Command Base.

On Sept. 24 at 0530 hrs, exchanges of fire occurred in the vicinities of Kuthkai, Loi Sam Sip Bum, and Lagaw Paju villages between a TNLA element of 200 soldiers and an estimated 70 Burma Army soldiers from IB 45 (under LID 99). The TNLA element was from 113th Battalion under 5th Brigade.

On Sept. 21 at 0715 hrs, elements of the Kachin Independence Army (KIA) 9th Battalion exchanged fire with Burma Army elements in the vicinity of Nawng Jang Hkyet.

On Sept. 18 at 1300 hrs, approximately 60 Burma Army soldiers from LID 99 exchanged fire with an estimated 40 MNDAA soldiers from 5th Brigade at Ura Bum (a Lisu village).

On Sept. 16 at 1400 hrs, an element of approximately 60 Burma Army soldiers from LID 99 clashed with elements of the MNDAA at Bang Um Bum above Banggai Ja Maw.

On Sept. 9 at 1100 hrs, Burma Army troops exchanged fire with TNLA troops in the vicinity of Hpawawm Dahti Village.

On Sept. 19 at 0500 hrs, a Burma Army element of around 60 troops from LID 99 were enroute from Hpawng Seng when they attacked an MNDAA position (estimated 20 troops) in the vicinity of Bang Satai Village.