In Toungoo District the Burma Army continues to conduct frequent attacks and patrols designed to terrorize the population, making it impossible for villagers to stay in their homes and work in their fields. These attacks are sustained with the use of widespread forced civilian labor and extortion.

On 12 May, 2007 Burma Army soldiers from LIB 542 and 544 attacked the Ber Ka Lay Ko village area of northern Toungoo District, northwestern Karen State, Eastern Burma. It was reported that during the attack they captured a woman from Ber Ka Lay Ko village. They then raped and murdered her. A relief team is now investigating this report.

On 15 May, Burma Army LIB 542 attacked villagers working in their farms. Many villagers were able to flee because they could hear the Burma Army troops making noise as they approached, however one man, Saw Hsar Mee, 55, was deaf and was unable to hear the attacking troops. The Burma Army then shot and killed him in his field house.

They also captured Saw Kwa Kwa, 20, who was in his field planting rice. Villagers nearby fled when they heard the Burma Army troops were in the area. KNLA soldiers responded to this attack, trying to protect villagers as they fled and give them time to collect belongings. After fighting took place between the Burma Army and KNLA, the Burma Army executed Saw Kwa Kwa. Saw Kwa Kwa was from Glay Kee village.

The Burma Army also shot and killed Saw Mu Der, 36, on the same day. Details about his death are not yet known.

LIB 542 is under the command of Hla Tun.

LIB 346 also forced each household from Wa Toe Koh and Ler Ko villages to send one person to work, or pay 1000 kyat.

On 15 May, Burma Army MOC 5 commander Khaung Mya, who is now in the Bawgali Gyi area, ordered people from the following villages to carry Burma Army rations from Bawgali Gyi to their camp at Maung Koe Der.

On the same day, people from the following villages were forced to carry rations from Maung Pai Der to Koe Wa Der camps.

Villagers are now subject to daily forced labor and extortion in the Burma Army’s attempt to consolidate and strengthen its control over villages in areas it occupies as well as launch new attacks against the thousands of civilians who continue to evade its control. Approximately 4,500 villagers remain in hiding in the mountains of Mon Township. The Burma Army is using civilian forced labor to build new camps and roads and to re-supply existing camps.

On 30 April 2007, troops from Burma Army LIBs 212 and 220 attacked Tah Ho Aw village in Kyauk Kyi Township, Nyaunglebin District, destroying the village as well as property that had been hidden in the jungle surrounding the village. The strength of the attacking troops was approximately 60 men, or two companies. Battalions 212 and 220 are under Light Infantry Division 11 and this column was under the command of Captain Than Htwe.

On 3 May, these same troops attacked the village of Ler Wah , also destroying all of the property they found in the village.

On 28 April, the Burma Army attacked the village of Yaw Kee (lat/long. N 18 42 33 E 096 54 40), in northern Mon Township. Troops burned down and destroyed farm huts surrounding the village. More than 150 people fled into hiding in fear of further attacks. One woman who fled was lost for two days in the jungle. Villagers have been unable to farm because of continued patrols and periodic shelling of areas the Burma Army suspects villagers may be hiding. 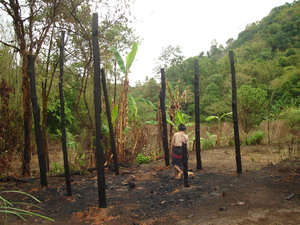 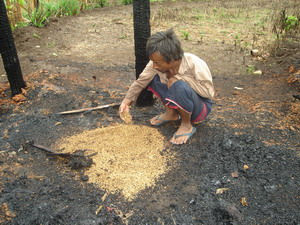 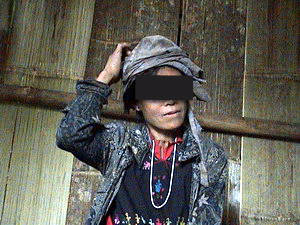 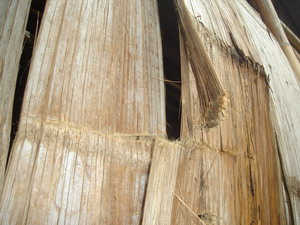 Photo: Burma Army bullet-hole in the wall of a field house in the Yaw Kee Area. 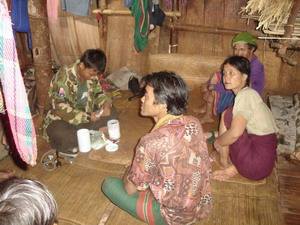 These small scale attacks have been launched throughout 2007 from new camps built during the Burma Army’s offensive in 2006. The Burma Army continues to heavily supply all forward camps using civilian labor, civilian vehicles and horses or mules. There are now more than 4,000 people hiding from these attacks in Mon Township.

Forced labor in areas under SPDC military control is widespread. On 7 May, approximately 1,000 villagers from more than six villages were forced to clear a new road between the Burma Army camp at Toe Daw and the camp at Yin O Sein. 164 villagers from Myaung Oo, Aung Chan Tha and Paw Pi Der villages were forced to clear the road and hundreds more from the villages of Myaw Oo, Mee Te Taw, Tee To Lo, and Kyauk Tan. The combined population of the area of these villages is about 10,000 people. One villager from Ta Kaw Pwa village tract described how this new road was built right across villagers’ rice fields, destroying about 500 acres of crops. The villages of Myaung Oo, Aung Chan Tha and Paw Pi Der must pay 30,000 Kyat to LIB 590 every month. LIB 599 and LIB 590 are currently posted at these two camps and are overseeing the construction of this road. 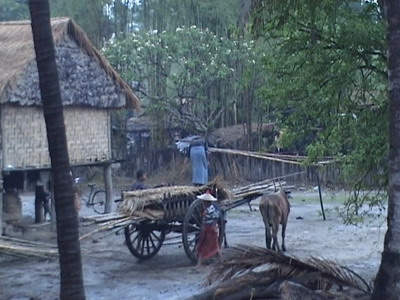 Photo: Villagers who have been forced to provide the Burma Army with thatch roofing.

Villagers are also being forced to cut wood and bamboo for use in Burma Army camps. Villagers have been forced to provide the Burma Army with food to feed Burma Army livestock, as well as build pig pens and chicken coops, and maintain gardens that will feed the Burma Army troops. The Burma Army has also been forcing villagers to purchase livestock from them, charging 1,800 Kyat for a chicken, when the regular price in the area is 800 Kyat. 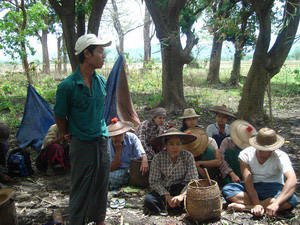 On 9 April, Burma Army LIB 590 forced local villagers to use their own bullock carts to move rations to their camp at Kwee De Kaw. Villagers were helping to push one of the bullock carts when a landmine exploded, wounding 5 villagers. We initially reported this incident in April. Since then, the Burma Army has not provided any compensation to the five villagers or provided them with medicine or medical treatment.

The Burma Army is also restricting the movement of villagers. Villagers in many areas are only allowed to go to their farms and orchards two times a week, making it impossible to sufficiently care for their crops. Villagers have reported the loss of large amounts of plants such as Durian, Betel Nut and Cardamom. Villages that have reported this restriction are:

Many villagers have not permitted to build farm huts in their fields, and have been told that any huts found will be destroyed and villagers found in field huts or in the jungle will be shot. Beginning in March, villagers in the plains area between the Sittang River and the mountains to the east are being forced to act as informants. They have been forced to build numerous security huts from Mon to Shwey Gyin, and are to report on any strangers or suspicious activity. Any villager on duty who does not report all activity faces a fine. Every village must send people to man these posts.

Villagers are now facing a food crisis and suffer from a lack of health care and education because of the difficulty of complying with Burma Army demands.

In Papun District, the Burma Army continues to attack villages and IDP populations, now focusing on an area where they are constructing a new road. If completed, this road will effectively quarter northern Karen State, enhancing the Burma Army’s ability to attack villagers, and making travel extremely difficult for both civilians and those trying to provide humanitarian relief. More than 4,000 people remain in hiding after the Burma Army attacked the Kay Pu area in late April. Hundreds more have joined them as a result of recent attacks.

Also on 17 May, the two Burma Army battalions entered the Htee Mu Kee area. One column attacked and entered the village, while the other column remained on top of a nearby hill, mortaring villagers as they fled. No injuries were reported.

On 7 May at 11:30 Burma Army soldiers based out of Wah Klei Tu camp in northern Papun District attacked Day Bu Plaw village in the Yu Gaw Kee area. They burned down four houses in the village. These houses belonged to: