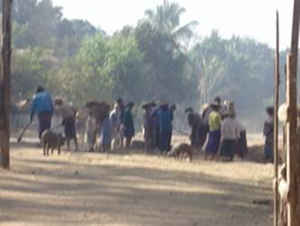 Photo: Blu Doh villagers forced to clear ground for the construction of a new LIB 351 office. 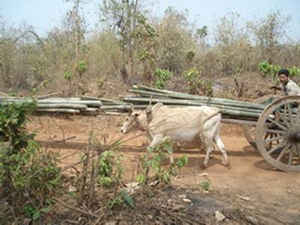 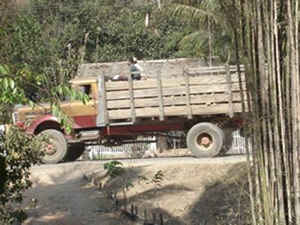 Photo: Civilian vehicles forced to carry rocks for the improvement of the new Burma Army road.

3. On 4 and 9 April, 2007, Burma Army LIB 599 forced 250 villagers from Ko Nee and Ta Kaw Pwa (Tak-gon) village tracts to carry food for the Kaw La Wah Lu army camp. Each Day 250 villagers were required to report to LIB 599 battalion headquarters. The Burma Army threatened to capture villagers if at least 250 villagers did not come to carry loads.

On 2 April, 2007, Burma Army MOC 5 commander Khaung Mya based in Bawgali Gyi (Kler La) forced the Bawgali Gyi villagers to cut 400 pieces of bamboo for use at the army camp.

1. During fighting between the KNLA and Burma Army at P’Yalaha, one Burma Army bulldozer was damaged. LIB 349 demanded 38 million kyat from Hti Bah Lo Village (the village contains 83 houses with 420 civilians) for reparation. The Burma Army threatened to put the village headman and secretary in prison if villagers could not pay the money. When the KNLA destroyed another bulldozer in Mon Township, Burma Army LIB 590 battalion commander Moe Win and company commander Zaw Myit demanded 170 million kyat from Wei Gyi and Lu-A villages. Wei Gyi Village has 115 houses with 791 people and Lu-A has 117 houses with 711 people. If they do not pay the money for the bulldozer the villages must relocate to between Nyaung Bi Zeik and Myaw Yo Gyi


2. Burma Army LIB 599 battalion commander Tin Po Aung has been inflating the price of food to extort money from the following village tracts: Mon, Tat Kone, Naung Bo, and Mwai Twain. One example is the selling of chickens for 1,800 kyat, as opposed to the standard 800 kyat. 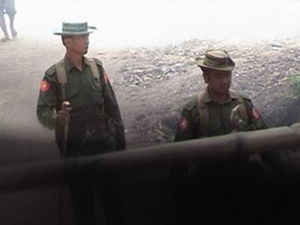 Photo: Tactical Operations Command 2 under LID 11 returned to Muthey on 17 April 2007. The TOC commander is on the left, accompanied by a battalion commander. 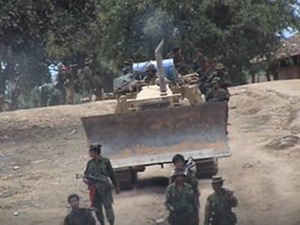 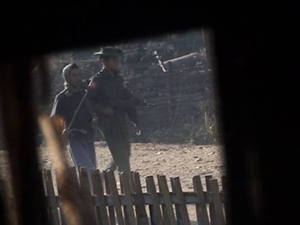 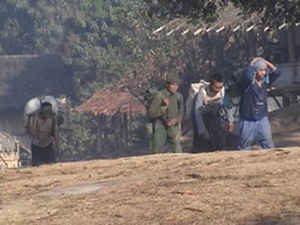 “My name is Naw Xxx Xxxx and I live in Saw Ka Der Village. I am a school teacher in the village. I want to tell you about the situation in my village. Last year, in 2006, I had to flee and hide in jungle almost every month; in this year, 2007, in the month of March, I have fled into the jungle and hidden more than four times. At the end of March, villagers in Saw Ka Der Village had to flee and some had no time to run; the BA captured them but did not take them. The army looted all the household materials. A woman with 3 children who the BA captured said they looted all of her children’s clothes, the cooking pots, machetes, and everything; she begged the army and they gave her some cooking pots and machetes back. She said most of the army were young and many of them could speak Karen very well. The army also dropped some cards that said, “We do not hurt, we only complete our duty.” When I and all the villagers fled and hid, the army almost caught us in the jungle; they were very close to us, about 50 meters away from us. The army burned down a barn with paddy inside. They captured one man and until now we have not heard anything about him.” 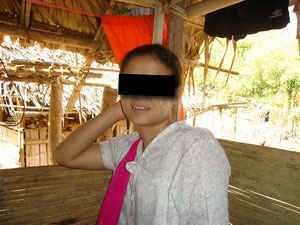 Burma Army LIB 351 has been slowly forcing Aung Soe Moe villagers to relocate for much of 2007. Many villagers have already moved to the Kyauk Kyi area (see report March 21, 2007), but some have built small temporary houses near their old village as the Burma Army has demanded all homes to be destroyed. Only the clinic and school in the village have not been torn down. 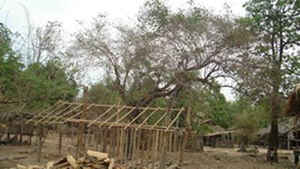 Photo: Houses in Aung Soe Moe village that have been destroyed by order of LIB 351 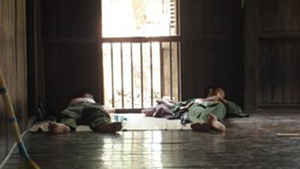 Photo: LIB 351 soldiers napping in Aung Soe Moe village after entering the village to oversee the relocation of the village.