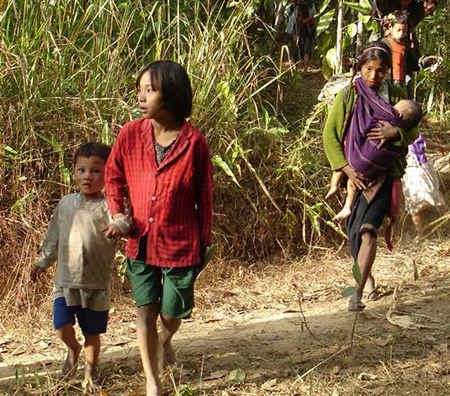 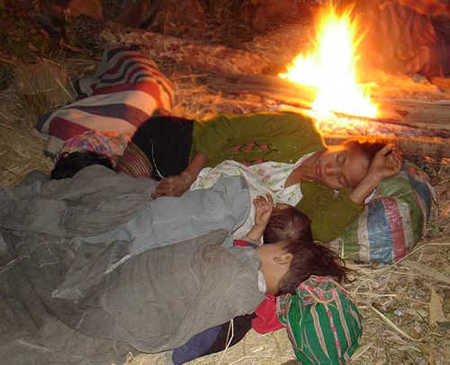 IDPs sleeping next to fire 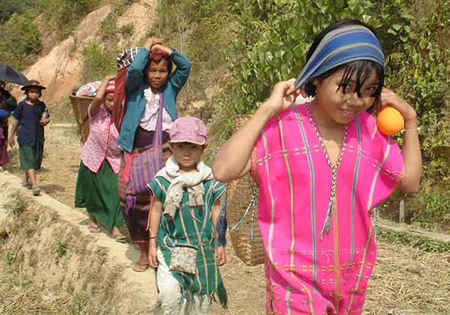 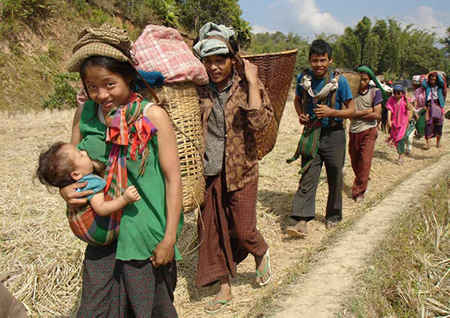 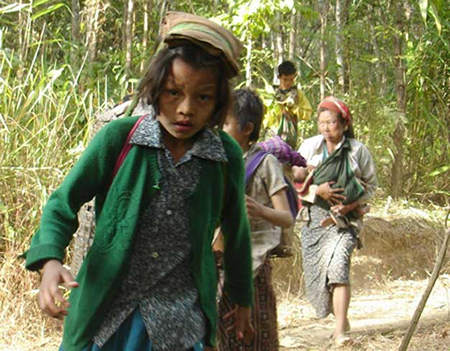 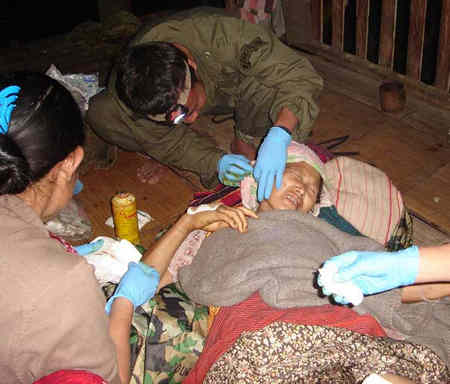 We thank all of you who care for the people of Burma and who stand with them. Yesterday as we crossed a Burma Army controlled road to take relief supplies up north to the areas under attack, over 60 people crossed going the other way. These were more families from Toungoo District who could not live under the abuses of the Burma Army. Parents carried babies on top of their loads while children walked ahead and carried what they could. One girl was crying softly as she crossed the road.

Almost every week small groups of families attempt to cross this dangerous road and keep moving down towards a displaced refugee site on the Salween River. They are some of the over 25,000 people who have been displaced by the attacking Burma Army. The Burma Army continues its expansion of roads and camps making it more difficult and dangerous for people to move freely. 33 new camps were built in this area in 2006 alone. The growing road network allows greater control of the area as well as acting as a series of obstacles for villager and IDP travel in many places. These roads are garrisoned, patrolled and mined by the Burma Army. The teams here have to cross these roads multiple times during relief missions. It is always dangerous as well as logistically challenging for the movement of relief supplies and sick or injured people.

Three days before this most recent crossing, another group of 15 families (62 people) crossed the Burma Army controlled road near here on their escape south. We had heard about this earlier group of 15 families while we were still south of the road, but did not know exactly when they would try to cross. We had gone up to the road to help carry one of our team leaders who has been sick for over a month and now could not walk. We have now evacuated him, in a series of relays, for treatment.

Once at the road, after receiving the team leader, we met the families who were crossing at the same time under escort by the Karen resistance (KNU). At the road the people ran across, fear in their faces, as the Burma Army was very near. The KNU soldiers provided security and when the last family was across, they waved goodbye to us and we all left the road. The team helped to carry belongings and some of the chidren.

We went with the IDPs to the nearest village and there at twilight helped them find a place to sleep for the night as the local KNU authorities, village leaders and the teams organized food for them.

There were many families that we had met on earlier missions and they came to us smiling and saying, “It is so good to see you again, thanks for your help and we are sorry we cannot stay in our homes.”

“Why did you leave?” we asked one woman.

“Because the Burma soldiers burned my village down and are patrolling all the time,” she answered. Another said, “We had to run because of the Burma Army attack and because now it is very difficult to farm- we were running out of food.”

That night the families ate and as it got colder, slept close around fires.

The next morning, there was a shout and we all ran to see what was happening. A wild boar was in the rice field and charging about. Two of our team members grabbed hunting rifles and shot it. The IDPs were glad because now they would have meat. The families came down to help butcher and share in the meat.

After this the Good Life Club team who was with us (along with two KWO women), conducted a children’s program that involved stories and games. Soon the children were running and laughing.

All of this was incongruous with what some might expect from people on the run who have just lost everything. There was laughter and smiling all around. The children and some mothers played, while the men watched and laughed around the fires as they cooked the meat.

As I watched, I was reminded of another wild boar and a different situation that had occurred a week before this.

A woman, Naw Blay Paw, 50 years old and mother of five, had been carried on a bamboo stretcher to us from a village a days walk away. This village is close to a Burma Army camp and the people there are always ready to flee. Around the camp and on the trails leading out from the camp the Burma Army has placed many landmines. A wild boar had stepped on one of these mines and had lost its leg. It was maddened by pain and in this state entered a rice field near the village. Here Naw Blay Paw was tending her fields. The boar saw her and immediately attacked. It slashed her with its tusks and knocked her down. As the boar tore and bit her, it pushed her back 25 meters along the ground. Naw Blay Paw fought back and finally the boar left her. She was badly injured by the attack with severe gashes on her head, legs, hand, groin and genitals. Villagers came running and found her. They also found and killed the boar, which weighed over 100 kilos (over 200 lbs).

A local medic cleaned her up and stitched her wounds. She was then carried to us, as the medic had not enough medicine or antibiotics. When she arrived the next day, the wounds were already badly infected and smelled bad. Our medics gave her antibiotics intravenously and cleaned her wounds. I remember looking into her eyes as I held her hand when she was first carried in. Tears came as she was being cleaned but she did not scream. She seemed afraid and in great pain yet she exerted amazing self-control. We comforted her the best we could and prayed for her. After she was re-bandaged we dressed her in warm clothes and she even smiled. She was then carried the next day to a mobile clinic. The clinic could not give sufficient help so she was carried again to a larger clinic where we heard she is still alive.

Now back with the IDPS and a week later, another boar had come.

After the IDPs had packed their baskets that morning, the families formed into a long line and continued the walk to the border. As they walked, some of us ran ahead to take photos and as we did, we saw that some began smiling at us. “How would anyone looking at our photos of smiling people think this was a serious situation?” I thought.

And yet, as they face trouble, uncertainty and death, these people do smile and have hope. We too want to have that hope and keep the fires of love alive.