We continue to see forced labor by the Burma Army with our own eyes here in the Northern Karen State. The following report and photographs only cover some of the abuses conducted by the Burma Army. For more information please see www.freeburmarangers.org.

Along with giving medical care and providing limited assistance in the form of clothes, food and shelter, the FBR teams here also try to put a light on the activities of the Burma Army. The Burma Army’s use of forced labor is systematic and ongoing in the area we are working now. Forced labor is common throughout Burma, but this report will only highlight some incidents in the three Northern Karen State Districts of Nyaunglebyn, Toungoo and Papun. 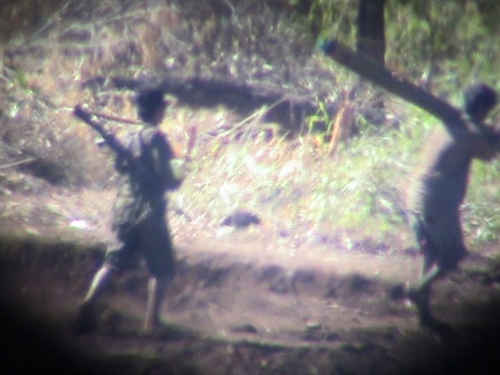 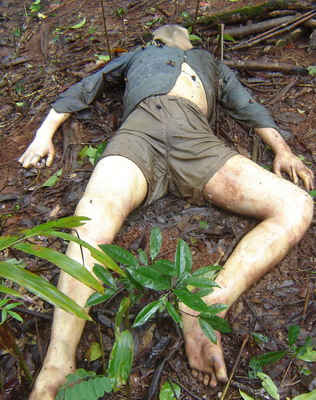 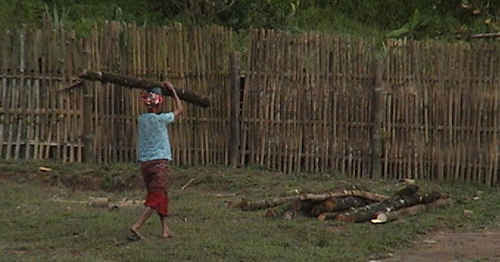 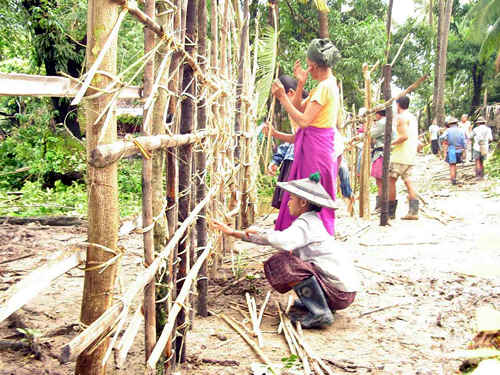 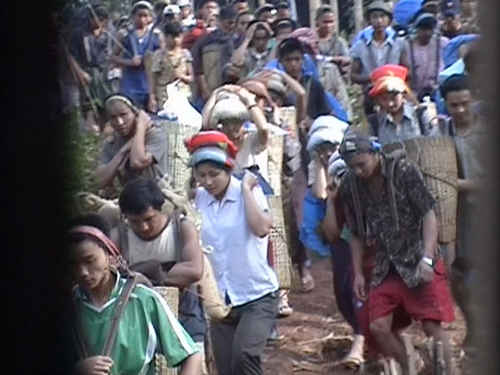 Some of more than 850 porters 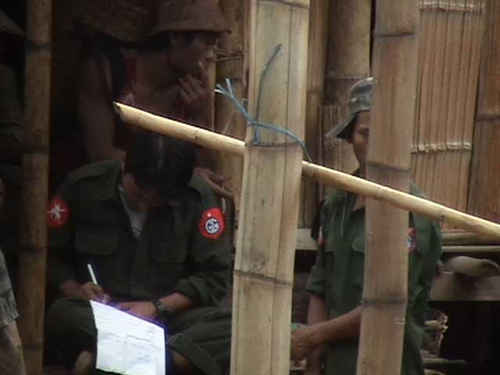 1) Human Shields: Division 66 is forcing villagers to clear landmines and act as human shields along the Toungoo-Mawchi road. Villagers from 12 villages surrounding Baw Ga Lyi Gyi (on the Toungoo-Mawchi road) have been forced to act as human shields around a bulldozer and to go ahead of the construction unit to clear the roadway of potential landmines. The 12 Villages are; Baw Ga Lyi Gyi, Ye To Gyi, Yee Tho Gale, Si Si Thaung, Kyaw Ponge, Baw Ga Li Ley, Ga Mu Der, Der Doh, Mae Kyaw, Sa Ba Gyi, Kubyaung, Pyaungtho.

One example is a village of 55 households where the Burma Army forced 1 person from each household to take security for the bulldozer with 5 men walking on the left side, 5 men on the right side, 3 men on the bulldozer itself and the rest to walk in front of and behind the bulldozer. This follows the forcing of 850 villagers to carry supplies for the Burma Army and to act as human minesweepers in May and June along the same road.

2) Porters: 1,700 prisoners have been forced to porter loads, and 265 are reported dead. The Burma Army has used over 1,700 porters in this offensive and over 265 have been reported to have died, many who were executed. Among the porters in Papun District alone, there are over 20 child porters (boys under 16 years old from Insein Prison). The Burma Army is now using the term, transporter-Woon Htan, instead of prisoner porter to describe the people they force to carry their loads.

On 12 December, we took photographs of prisoner porters carrying loads under guard by the Burma Army in the new camp of Shway Jo in Papun District. This is one of the over 33 new camps built this year to support the ongoing offensive. There were over 20 porters in this camp. We watched as they carried loads under guard across the helipad in the camp. We also photographed porters under guard being forced to carry water for the camp. They all moved slowly, looked weak and were dressed in dirty longyis. The Burma Army fired machine guns and rifle grenades into the jungle surrounding the camp in order to keep anyone from interfering. The porters were guarded at all times with soldiers walking in front of them and behind them.

Porters killed by Burma Army or who have died from sickness:

4) Villagers in the Muthey area are forced by the Burma Army to build fences around their villages (Nyaunglebyn District, western Karen State). Photo; 24 August 2006.

6) Other Forced labor: The following are only a few of the many examples of forced labor in this area.

Alsoon 30 November Burma Army commander Tin Po Aung from LIB 599 moved from his camp to a new location at Yang Myo Aung. He ordered Tu Ca Bi, Aye Nat, No Gaw and Wet Lar Taw village tracts to each send 6 bullock carts and 15 men to assist with moving the camp and digging bunkers and fences at the new location:

On 2 December, the same commander ordered villagers to assist a landowner with the harvest of his rice paddy. This type of labor is usually compensated by the landowner to the helping hands, however commander Tin Po Aung then forced the landowner to pay him any of the money that would have otherwise gone to the villagers for their labor.

Along with forced labor and the use of people as human shields, over 76 men, women and children have been killed, and 25,000 displaced in this area alone this year. We are grateful to all of you who stand with all the oppressed of Burma.

(Note: The Karen Human Rights Group, among others, also has extensive documentation of forced labor by the Burma Army this year and in previous years).