25 Civilians Killed in one Township Alone 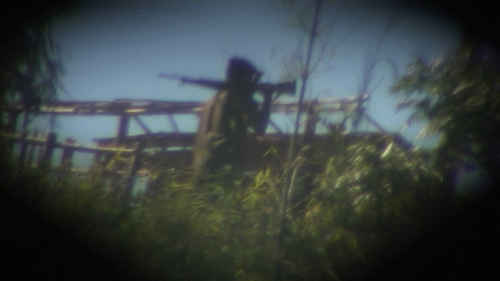 This new camp is the headquarters of one Tactical Operations Command of MOC 16 which is leading the attack in Mon township, Karen State, Eastern Burma. This camp is also garrisoned by Southern Command troops of IB69 and was established in October after chasing villagers away. This is one of 30 new camps built by the Burma Army in 2006. This camp is on the same mountain as the site where the Burma Army ambushed a group of fleeing villagers in April- killing a man and his 80 year old mother and wounding his nine year old daughter. This camps dominates the area and all villages under its’ guns have been abandoned. 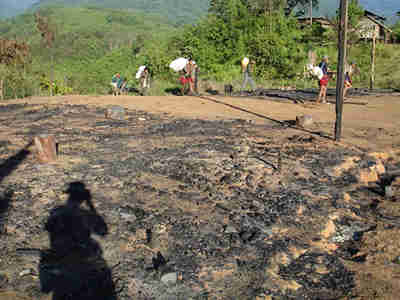 Burma Army troops burned this home and the local KNU police station, four other villages and numerous rice barns and field houses in Mon township during this ongoing offensive. 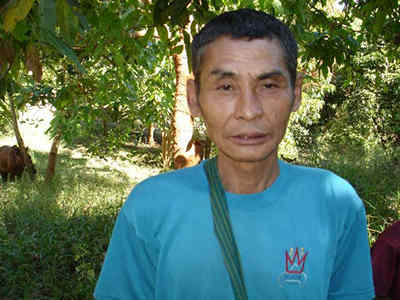 3) Photo of father of captured girl.

This man’s daughter was captured in late 2003 by the Burma Army as they attacked his village and burned down a one hundred year old church. His family left to a different village but since the attacks this year they have been on the move.When we talked to him and his wife, tears came to her eyes and she could not speak. These are the same parents that were interviewed in the “Steps to Freedom” and “In Hiding” videos. 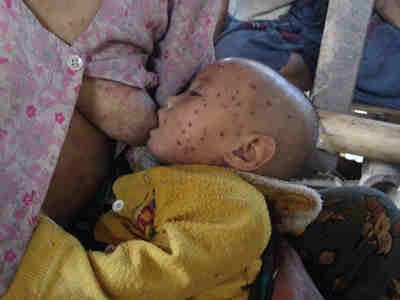 4) Photos of child and mother with skin disease.

There are many sick people here due to the attacks. Along with increased rates of sickness and mortality, the people here are now much more susceptible to all types of disease including serious skin diseases. This is due to living on the run, lack of shelter and clean clothes, poor nutrition and sometimes crowded hide sites. There are many people suffering like this girl and her mother. (BPHWT and KHRG have published reports that show the correlation of human rights abuses and the resultant drop of health in the areas under oppression.) 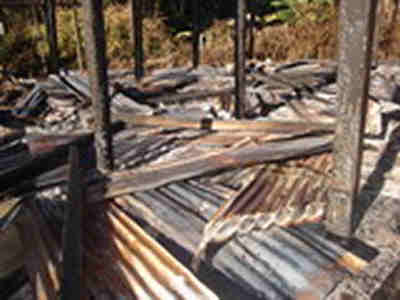 This report is from a relief team in Mon township, sent 5 December 2006. The Burma Army has built 30 new camps in support of their attacks in Northern Karen State in this year alone. These camps are squeezing the people out and are part of an operation to slowly strangle the remaining population. In Mon township alone (Nyaunglebyn District), there are eight new camps. This reports contains a photograph of one of these new camps- Htee Wa Bwey Kee camp. This camp is the headquarters of one Tactical Operations Command of MOC 16 which is leading the attack in Mon Township, Karen State, Eastern Burma. This camp is also garrisoned by Southern Command troops of IB69 and was established in October after chasing villagers away.

The Burma Army shells surrounding rice fields, patrols and shoots anyone they see on sight. 25 men, women and children have been killed here this year. In spite of the new camps and ongoing operations, the people have not given up and daily try to get to their fields to harvest the remaining rice. Just yesterday after going through two abandoned villages and fields where the Burma tried to shoot villagers, we met a group of four women on the trail. We asked them, “Where are you going?” They said they would try to go to their old fields as there was still rice there and they needed to get it for their families. The Karen resistance and those village men with weapons try to provide security. This security is however, limited and can not stop the mortaring from the camps. The villagers work together to help each other. One villager told us, ” No matter what they do I will not run away, this is my home, I will die here”. We told him,”Don’t die here, your people need you- stay but live”. He then said, “Some have the duty of defense when the Burma Army attacks us and some are leaders, but someone has to carry the rice for everyone. I am a strong man and that is what I do, I carry rice for all. So it is not a duty of a great man but it is my duty and I will try my best”.

Here the Burma Army is building up new camps and extending their hold on the land and its people. The resistance (KNU) is trying to protect the people and provide early warning. The villagers try to sustain themselves and their communities by gathering food, even under the guns of the Burma Army. The resistance is well organized and helps to find places for the people to hide. But as one resistance leader told us, “The last few months the Burma army has attacked so much, that many of the hiding places were overrun and we could not direct all the people- many were scattered in the jungle. Now it is a little better as the Burma Army is busy building up their new camps. But when they are finished with the new camps they will come again. This is a very bad offensive for us all and we do not know exactly how we will manage it. But we must try and we will not leave our home.”

Note: Over 25,000 people in the Northern Karen State have now been displaced.

The following is an update on the use of human shields in Toungoo district and the push for a new Burma Army road in Papun District.

Now in Toungoo District, the Burma Army continues to burn villages, build up the five new camps it has built there and is forcing villagers to clear landmines and act as human shields on the Toungoo- Mawchi road.. Villagers from 12 villages surrounding Baw Ga Lyi Gyi (on the Toungoo- Mawchi road), have been forced to act as human shields around a bulldozer and to go ahead of the construction unit to clear the road-way of potential landmines. The village of Ber Ka Lay Ko was attacked and burned by IB 11 and IB 14 on 14 November 2006. On 16 November IB 11 and IB 14 then burned They Gi La village. On the same day these two units then burned Htee Hsa Ber village. There are over 6,000 people displaced in Toungoo District now. Division 66 and MOC 15 are also attacking villages and are trying to push a new road from Busakee in Toungoo District to Ler Mu Plaw in Papun District. Busakee is at the southern terminus of a road that forks south of the Toungoo- Mawchi road. New Burma Army camps in Toungoo District: 5 new camps (2 main, 3 small)

The Burma army is continuing its’ reconnaissance of the planned new Ler Mu Plaw- Buskaee road that when complete will spit the Northern Karen State into quarters. New units are advancing on the high ground west of the Yunzalyn river along the planned new road from Ler Mu Plaw to Busakee. There are six new small camps on this route now. Villagers attempting to go back near their fields to harvest their rice are shot on sight. (We heard them shoot at villagers on the near Thaw Ku Mu Der on 25 November) In June and July over 7,000 people were displaced. When the Burma Army shifted it’s focus to the new road project from Ler Mu Plaw to Busakee many people were able to return to their villages. Now there are still over 3,000 displaced. The projected new road is called the Nay Phe Daw Road, named after the new capitol of Burma. Along the proposed route of this road 11 villages and over 2,100 people have been displaced already. New Burma Army camps in Papun District: 8 new camps (3 main, 5 small) (Note: Last week, the units belonging to MOC 15 (One TOC of MOC 15 had the new road mission), were replaced by one TOC of MOC 10. The MOC 15 units then went back to the Ler Mu Plaw area to take the place of the MOC 10 units. The reasons for this change are yet unknown.)

Summary: The Burma Army’s offensive in the Northern three districts of the Karen State has displaced over 25,000 people- most of whom are now in hiding. 30 new Burma Army camps have been built in this area of Papun, Nyaunglebyn and Toungoo Districts. The slow yet unrelenting attacks, building of new camps and road construction are driven by a plan to completely dominate, chase out or crush any Karen people in these areas. The Burma Army offensive began in earnest in February this year, with troops from over 50 battalions attacking right through the rainy season until present. This is the largest offensive against the Karen people since 1997.

Thank you and God bless you,
A Relief Team Leader FBR
5 December 2006