Report Summary:  The Burma Army has now introduced a new infantry Division (Division 44) into the offensive against people of Northern Karen State. With the addition of this division, there are now three Divisions and four Military Operation Commands (MOC) operating in this area. Combined with troops from the Southern Command there now are between 60 and 70 battalions involved in the attacks on Karen villages and the hiding places of displaced people in the area of Toungoo, Nyaunglebin and Northern Papun (Muthraw) Districts.

Two relief team leaders are relaying this report from the field. One from Toungoo District who just led 30 more people to relative safety and another from Nyaunglebin District who is coordinating the actions of three FBR relief teams there. The photos were taken by a two different FBR relief teams in Toungoo District and they show people fleeing as well as troops of Divison 66 entering Kaw They Der (Ye Tho Gyi) village enroute to attack the Karen. 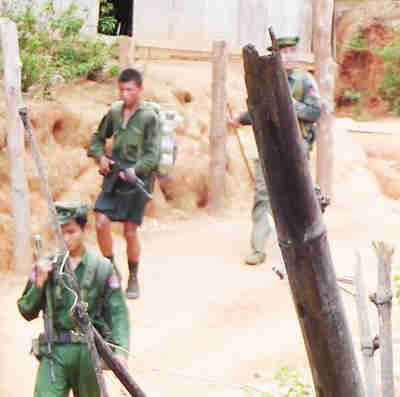 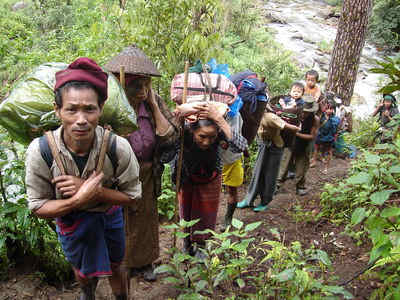 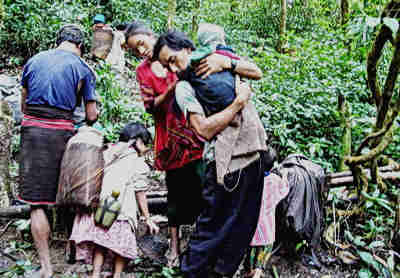 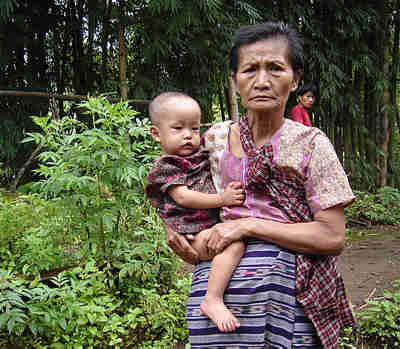 Villagers shot on Sight, High rate of Re-supply and the Building of New Camps, Ethnic Cleansing

Division 66, MOC 15, MOC 16 and troops from the Southern Command are engaged in attacking the civilian population in Toungoo district.

Since February, there have been over 100 engagements between the Burma Army and the Karen resistance (KNLA) who are trying to protect the villagers since February 2006. In September there have been 15 contacts and two Karen soldiers were killed in action.

There have been over 400 Burma Army casualties

September 5: Troops from Burma Army Division 66 shot and killed a 75 year old man, Poo Thu Kee Dee, at Ler Kla Der village. The entire village had already fled in the face of the advancing Burma army, but this man wanted to stay, and told the others, Even if they see me, I am old, so they will not shoot me. On 5 September the Burma Army found him in a beetle nut grove on the edge of the village and shot him to death..

8 September: Two villagers were killed at See Pwe Go Village (near Shazibo) by soldiers from Burma Army IB 73, ( Southern Command troops under commander Aung Ka). This family was captured on a sweep into their village by the Burma army. They had gathered to celebrate thanksgiving. They were taken to a nearby Army camp and the father and one son killed and then the family was released.

Burma Army Division 66: The Burma Army is re-supplying its camps and front line troops at an unusually high rate. There has been no letup of re-supply in the rains. As vehicles cannot be used, hundreds of porters have been forced to carry the Armys supplies. The people forced to carry loads are from two general groups; prisoners brought in from other areas of Burma as well as local Karen villagers who live in areas under Burma Army occupation. (This extraordinary re-supply effort in the rainy season demonstrates a very high level priority on this offensive. All the field commanders involved, from the MOC level and up have been to regular meeting with the Burma Army supreme command throughout this offensive). DIV 66 is also patrolling and is reported to have an order to shoot on sight any villager they find in the areas that they attack.

New Camps built in support of this offensive:

Division 66 is building a new camp and actively patrolling the areas along the Toungoo- Busakee and Mawchi roads. There is a new camp being built at See Day village east of the camp at Busakee. This camp is part of the strategic plan to cut off Toungoo District from the rest of Karen State. This new camp combined with two new camps in Northern Papun District and the camps along the Kauk Kyi- Hsaw Hta road make a complete circle around Toungoo District. They also split Nyaunglebin and Papun districts into quarters. This is a very dangerous situation for the remaining villagers and IDPS who fear an even large series of attacks once the rains stop.

MOC 15: MOC 15, which was leading attacks in the Northern part of Papun district, has shifted one Tactical Operations Command of four battalions to PLay Wah camp on the Toungoo road. The are now reported to be moving towards Busakee.

Due to these attacks the following 19 villages are newly abandoned:

20-30 Burman families have moved to the Busakee and Naw Soe area. There were none there before. They were told by the Burma Army to go this are of Toungoo district where the Burma Army was clearing out Karen villagers.

The Burma Army promised 20,000 Kyat per month pay for each family to move there. So far, they have been paid nothing.

Two families and two single men escaped to the Saw Wa Der area. They were promised they would be sent to Baw Ga Li Gyi (Kler Lah) but instead were sent to Naw Soe (Busakee) the first time.

They were all from Buda Gyi* (a section of Toungoo Town) area, Section #18. They said the families who came were shopkeepers, carpenters, and loggers. The Burma Army came to them and promised to build a new village. If you go, you will get 20,000 Kyat per month, can grow durian, cardamom, and augment your income, they were told.

They agreed and were sent to Naw Soe camp on the Kler La- Busakee road (east of Toungoo and in the heart of Toungoo District). At Naw Soe, they were forced to work on the Burma Army camp with no pay and told dont think about money or escape, you have to stay.

They escaped three times and now are with the Karen resistance(KNU). They are now being cared for by the KNU.

The attacks continue in Nyaunglebin District especially on the border of Mon and Kyayk Kyi Townships. The Burma Army troops operating here are Division 44 (newly arrived), 1 TOC of MOC 15, and MOC 21. In Papun District the main forces are MOC 10 and troops from Division 101. The main attacks in this area are occurring in Northern Papun district and are being launched out of two new camps in the Naw Yo Hta-Kay Pu area along the Yunzalin river.

On 15 September Burma Army LIB 590 began building a new camp in Mon Township. Division 44 has been brought in to reinforce MOC 10 in their attacks against the villagers and IDPs. In addition, MOC 16 is operating in both Northern Nyaunglebin and southern Toungoo districts. MOC16 commander Zay Oo May, arrived back from a meeting in Pyinmana (new capitol) and has a plan to set up more camps in the Ko Wa Ko and Ka Pa Hta areas .

From 28-29 September, the Burma Army sent food from Shweygyn to Kushaw camp on the Nyaunglebin- Papun border. MOC 21 has sent troops into the Ya Aung area north of Shweygyn town.

On 29 September, the KNLA and Burma Army had one clash.

On 30 September, the KNLA and Burma Army fought 4 times. During one of these clashes, the Burma Army shot one villager at Ger Wah Ko. His name was Saw Tu Tu and there are no other details about him at this time, including whether he is alive or not.

In the Maladaw of Mon Township, Christian worship services have been banned.