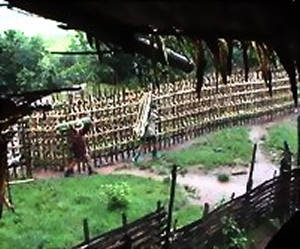 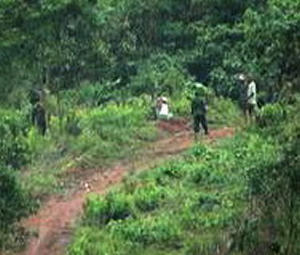 These are photos of Burma Army soldiers forcing villagers to build a military camp at Muthey, Nyaunglebin District, Western Karen State, Burma. This is part of a camp complex that the Burma Army is using in their ongoing offensive that has displaced over 20,000 Karen people. The offensive began in February 2006 with over 50 Burma Army battalions attacking villages and the hiding places of displaced people.

During this offensive the Burma Army is also extending its web of camps from which they plan to exert more control over the population. Four new camps are being built. Villagers such as those in this picture are forced to build the new camps and to collect bamboo and wood for the camp perimeter fences. Last week, one villager was beaten to death after not meeting the satisfaction of the Burma Army soldiers as they forced him to work. The pictures shows villagers that the Burma Army guards are forcing to build a new camp in the Muthey camp complex area. All the villages in the Muthey area are being forced to relocate to the site of the Army camps so that the Burma Army can control them and exploit them for labor. Please see www.freeburmarangers.org for maps that show the location of this camp and updates of the ongoing offensive.

(These pictures were taken at risk by a FBR team who are providing humanitarian relief in these areas.)