Over 18,000 people have been displaced as a direct result of Burma Army attacks and activities during the ongoing offensive against the Karen in the three Northern Districts of Karen State. The number of displaced villagers at any given time fluctuates depending on Burma Army activity. For example, in June, more than 28 villages in Mon Township fled into hiding. This was their third time fleeing into the jungle during this offensive. People throughout Northern Karen State are constantly prepared to flee new attacks.

The people are in need of security, food, and shelter. Because of these attacks, the people have also lost most of their rice stores, livestock, and have been unable to plant and farm crops on which they will survive next year. Thousands of people are in need of immediate help, and this need will undoubtedly continue throughout the coming year if villagers are unable to return to their homes and farms. 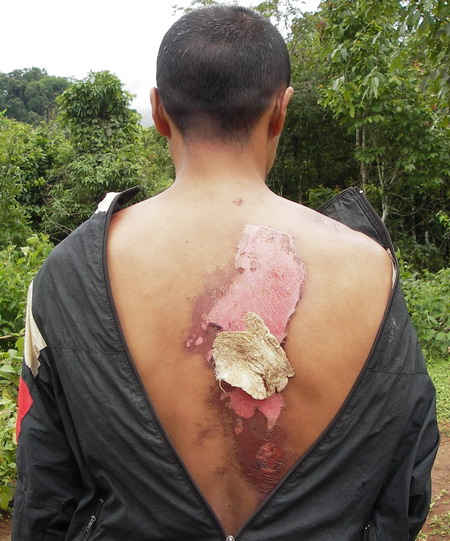 Injured porter forced to carry Burma Army loads in May 2006 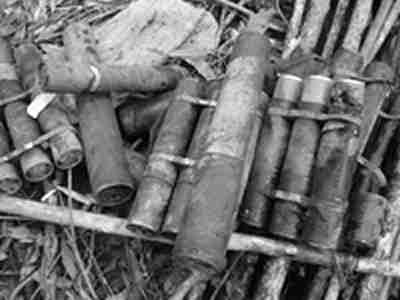 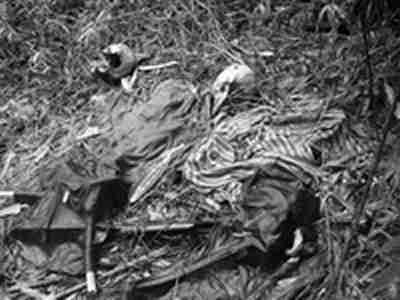 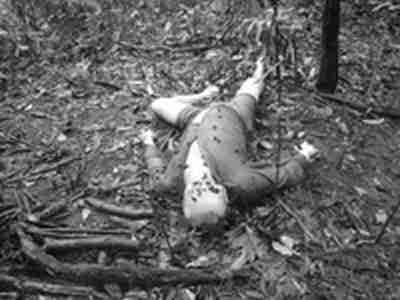 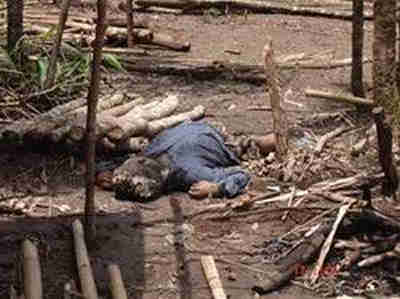 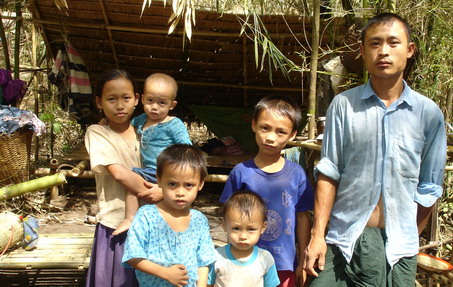 This family is in a hide site after fleeing Burma Army attacks in the Ka Pa Hta area of Mon Township. These villagers have now had to flee multiple attacks by the Burma Army. While this photo was taken in April, this family is again in hiding due to the latest attacks of late June and mid-July.

The Burma Army attacked Tee Ko village on July 15 at 8:30 am. This attack is part of an offensive that has been ongoing in Mon Township since March of this year. This attack was conducted by Burma Army LIB 603 (strength = 158 men), which is under Div. 66. Many villages have fled into hiding again, and the Burma Army has been mortaring any areas where they suspect villagers may be hiding.

Quote from a relief team leader who is currently in the area:

When the Burma Army entered the area, the villagers immediately fled. They know that if they are found in the area they will be captured and then tortured and killed. They also know that if the Burma Army cannot capture them, they will shoot at them. The Burma Army then moved through the area burning homes and rice barns, shooting the villagers livestock, and stealing and destroying other property such as pots and pans. The people are currently in a very difficult situation.

Because of the SPDC activities in Mon Township, people are running out of food. Students who live in boarding homes have been carrying food supplies every day of the week except on Sunday. I saw three villagers from Yaw Kei ask for food from the Township chairman. He was only able to give each person half a basket of rice. There are 17 houses and 96 people in the village.

This relief team leader in Mon Township set up a rice milling machine in order to help the people in that area to process the rice their previously harvested rice. The people have not been able to do this in their own homes using their own rice mills because they have all been forced to flee. This rice mill made it possible for villagers who were able to recover paddy rice from their farms to mill their rice, a process that is necessary to complete before the rice can be cooked and eaten.

When the Burma Army attacks we cannot face them. We are forced to hide in the jungle. So, when we run away we carry the belongings and children and climb the mountain without any trails. We have no shelter so we face a very difficult health situation.

Earlier, on 24 June, the Burma Army attacked Ka Pa Hta and Thet Baw Daw villages. They captured two villagers, Naw Kwee Kwe and Saw Be All, from Ka Pa Hta. The Burma Army tied them up with ropes and ordered them to follow wherever they went. Saw Be All was later killed and Naw Kwee Kwe was taken to Ma La Daw camp. Her physical condition is unknown and she has not yet been released.

During their movement the Burma Army burned homes, and stole and destroyed villagers belongings. The attack was conducted by LIB 522 (strength = 150 men ) which is under MOC 16. These troops left from Ma La Daw camp on 22 June, 2006 with 30 porters to carry food and ammunition for the attacks.

The SPDC have plans to relocate Muthey village to Thwein-bo-plaw ( East of Muthey, between Muthey and Paw Kay Ko). The troops have forced villagers from the Ler Doh area to build the buildings for this relocation. The aim of the Burma Army is to do logging, mining and to build a dam in the area.

On 2 July, 2006, the combined troops of the following battalions entered Shwe Tan and Toe Thein Pu (Toe Ta Dah) village and demanded 490 Kyat from every house in the village.

On 6 July, MOC 16 from Muthey camp forced Muthey villagers to act as landmine sweepers. The villagers used their own buffalos to go ahead of them. Four buffalos stepped on landmines during the sweep.

On10 July, troops came to Muthey from Kyauk Kyi (Ler Doh) and relieved the troops stationed at Muthey

TOC No. 2 of MOC 21 demanded 75 bullock carts and 400 persons from the plains to clear the road from Baw Ka Hta to Roe Ka Soe camp so that carts can send food and supplies to Roe Ka Soe. Each villager must bring a knife or machete. The Burma Army started sending loads on 6 July.

In Hsaw Hti township, Burma Army troops are patrolling in the area between Ler wah and Ya Aung.

The Burma Army has launched new attacks against villages in southern Toungoo District, forcing hundreds of villagers into hiding. They have also abused porters who have been forced to carry loads in support of these attacks, and stolen villagers belongings.

On 6 July 2006, Burma Army LIB-568, under MOC 16, which is based at Play Hsa Lo attacked Saw Wah Der village. Burma Army soldiers burned down four houses in the village and laid anti-personnel landmines around the village. Two landmines were found on 7 July near villagers homes and one was found near the bathing area.

Burma Army LIBs 352, 353, 564 and 565 which are based at Tha Pyi Nyut came to See Daw Ko village on 6 July 2006 and left later that day. KNLA soldiers found six Kachin and La Hu porters at the village. These people were being forced to carry loads against their will by the Burma Army, and had been brought from areas of Burma far to the north of where they were forced to carry loads. One porter was found in nearby bushes because he could no longer walk. The Burma Army left him to die in the bushes. Relief team members took him to See Daw Koh and gave him medical treatment. The other five porters were sent back to the city, but the one porter remained behind because he could still not walk.

The Burma Army forces people to carry loads with little food and rest. When porters become too weak to carry loads, they are often beaten and left to die. Many forced porters escape this abuse by running away into the jungle where they may find assistance from villagers and resistance groups.

Troops from Division 66, stationed at Kler La army base asked the local villagers to give 30 viss of pork and 3 monk’s robes for the Ka Tain festival. The cost of these items is more than 10,000 Kyat. During their patrol of village, the Burma army also took a computer, 2 generators and a movie for watching.

Villagers who were captured by the Burma Army

Prices of food and supplies in Mon Township: